Caravaggio’s “Conversion on the road to Damascus” (1601) Via FT.

Currently showing at Rome’s Galleria Borghese is an exhibition of paintings by Italian master Caravaggio and the 20th century Irish painter, Francis Bacon. The exhibition, which has already drawn over 70,000 visitors, displays 14 paintings by Caravaggio along with 17 paintings by Bacon and functions as a kind of commemoration– marking 400 years since Caravaggio’s death and 100 years since Bacon’s birth. Mixing the past and present masters together gives rise to inevitable comparison, and although it is widely acknowledged that Caravaggio had no direct influence upon Bacon, their work shares a broad range of thematic and stylistic properties– among them, a fascination with anatomy, a fixation on depicting an anguished and tormented human condition and revolutionary approaches towards depicting the human form and the expressive portrait in pursuit of realism.

Francis Bacon’s “Study of George Dyer.” (1969) Via FT. (George Dyer, Bacon’s most significant and constant companion and model, committed suicide in 1971, two days before Bacon’s major exhibit at the Grand Palais in Paris.)

Caravaggio’s, “David with head of Goliath,” (1609-10),  Via Galleria Borghese. It is believed that Goliath’s severed head is, in fact, Caravaggio’s own self-portrait, reflecting a kind of self-disgust. (In 1606, Caravaggio was convicted of murder and this painting was sent to the Papal Court as a kind of “painted petition for pardon” (Galleria Borghese).

Francis Bacon’s “Head IV” (1941) is one of 17 paintings by the artist currently on exhibit, on loan from London’s Tate Gallery. Via Artnet. Bacon once famously said of his paintings that “the paint comes across directly onto the nervous system.”

Beyond the realm of stylistic and thematic comparisons, Caravaggio and Bacon hail from vastly different cultural and political time periods. Born in Milan in 1571, Caravaggio moved to Rome in his twenties during the period of the Counter-Reformation and emerged onto the Italian art scene in 1600 with two public commissions– the “Martyrdom of Saint Matthew” and the “Calling of Saint Matthew.” At this time, the Roman Catholic church was actively searching for authentic religious art with which it could hinder the threat of Protestantism. While the 16th century Mannerist movement in art brought about a kind of artificial idealism in style, Caravaggio, contrastingly, engaged in a radical and gritty naturalism– depicting realistic imagery amongst ordinary, earthy settings, choosing models from the common people, and using a painterly technique known as “tenebrism” along with chiaroscuro to convey dramatic lighting. This authentic portrayal, more sensuous than intellectual, appealed to the motives of the Catholic church. Consequently, Caravaggio received plentiful commissions.

In Caravaggio’s, “Madonna of the Palafreneiri,” (1606), Mary teaches a young Jesus how to crush a serpent. Via Galleria Borghese.

Francis Bacon, internationally known as being among the most powerful painters of the twentieth century, was born in 1909 in Dublin, Ireland. Known for exposing human fragility and evoking brutality in shocking ways, the artist first emerged onto the scene in London after World War II when his paintings were greeted with a mix of horror and appreciation. Throughout his work, Bacon evokes a kind of bleak fragility of the human condition–often using nude forms to emphasize vulnerability, along with figures that are screaming and crying– conjuring notions of violence and repressed anxiety.

Francis Bacon’s “Triptych August 1971,” Via Artnet. After Bacon’s lover and most frequent model, George Dyer, committed suicide, the artist began a series of “Black Triptychs.” Above, Dyer appears on the left and Bacon is on the right. The center image is derived from a photograph of wrestlers by Edward Muybridge. 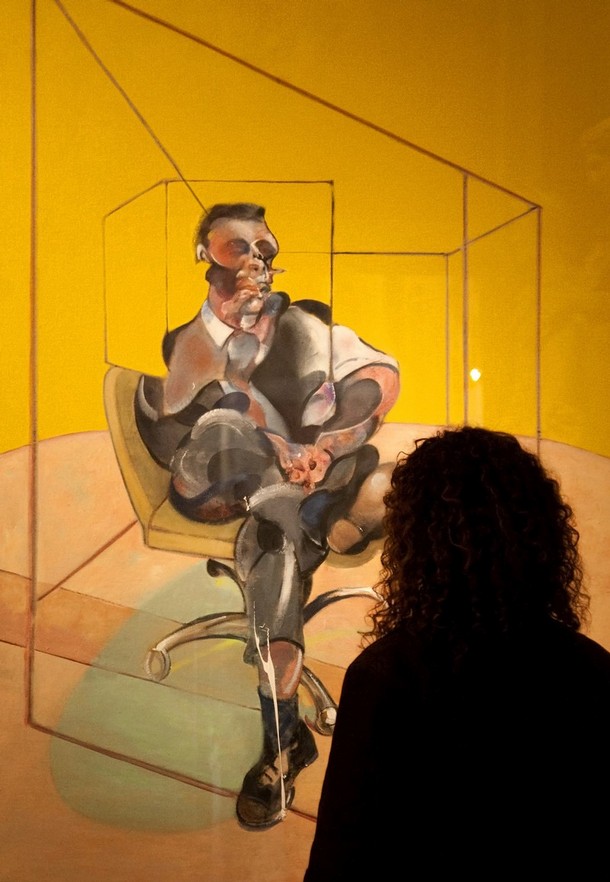 A viewer looks at a Francis Bacon painting at the exhibition at Galleria Borghese in Rome. (2009) Via Reuters.

While Caravaggio was a Catholic– his artistic production heavily intertwined with religion and politics, Bacon, on the other hand–born in 1909 into a more secular world, was a confessed atheist. This difference in cultural context from which the artists sprang forth sheds light on variances in inspiration and motivation underlying their work. Unlike Caravaggio, Bacon strove to portray a human condition without notions of God or an afterlife, and critics have commented on his depiction of humans as mere animals, as “meat”–subjected to the same urges of irrationality, violence, fear and lust. The different time periods also posed different artistic and philosophical concerns for the artists– Bacon was subjected to the challenges that advances in photography posed to painting, and perhaps in reaction, he developed a radical form of realism which could convey qualities of existence and of the “perceived world” that photography couldn’t necessarily capture. On a similar note, Caravaggio struggled to combat the prevailing idealistic and artificial qualities of mannerism by painting from life (like Bacon, without drawings) in pursuit of realism– regardless of the haunting, vulgar and scandal-provoking images that sometimes followed.

In Caravaggio’s “Sick Bacchus,” (1593), which belongs to the Borghese’s permanent collection, the artist undermines the seriousness of mythological pretensions and Renaissance tradition by portraying the God Bacchus as a rather sickly looking man. Via BC 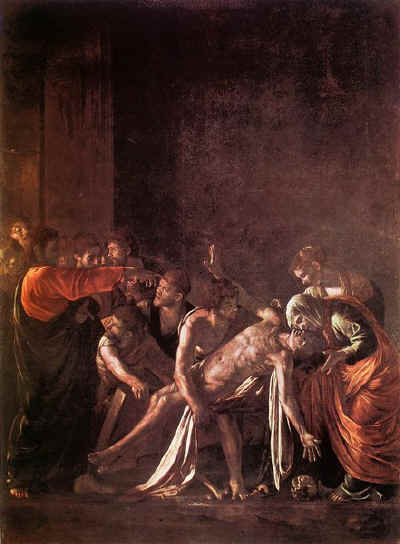 Painted near the very end of his life, Caravaggio’s “The Raising of Lazarus,” (1609), embodies the dramatic naturalism for which the artist is known.  Via Bible Art Gallery. 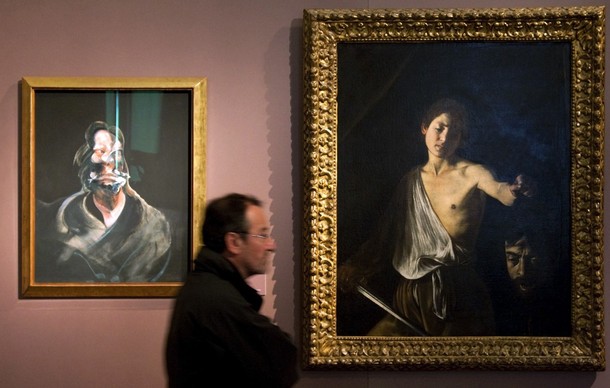 A viewer strolls by paintings by artists Bacon and Caravaggio– separated by four centuries, the exhibition brings light to their shared depictions of the human condition and varying approaches to realism.

While the historical context behind the artists and their work is notable, the exhibition at Galleria Borghese is meant to focus on the aesthetic experience created by the unusual confrontation between the two bodies of work which hail from different centuries, yet hang side-by-side. Curated by Anna Coliva, the Director of Galleria Borghese, and organized by MondoMostre, “Bacon-Caravaggio” will be on exhibit through January 24th, 2010.

This entry was posted on Thursday, November 26th, 2009 at 9:00 am and is filed under Go See. You can follow any responses to this entry through the RSS 2.0 feed. You can leave a response, or trackback from your own site.

One Response to “Go See – Rome: Caravaggio and Francis Bacon, Side-by-Side, in a Commemorative Exhibition at Galleria Borghese through January 24th, 2010”