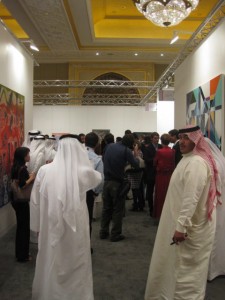 Last week at the Emirates Palace in Abu Dhabi, the inaugural Art Abu Dhabi brought major figures from the international art world to the to rich capital of the United Arab Emirates.  A boutique fair in comparison to Frieze, Dubai, Basel, and Miami, the event showcased only fifty galleries. The event was nevertheless international and high-profile displaying masterworks by Alexander Calder, Damien Hirst, Jeff Koons et al many of which had never before been shown in the region.

Princess Michael of Kent at Galerie Gmurzynska and viewer looking at Gursky, via artforum

Site for Guggenheim in Abu Dhabi and Dealer Iwan Wirth, via Artforum

According to Arts and Culture Director of TDIC (Tourism Development and Investment Company), Rita Aoun Abdo, the real incentive behind such an event was to bring art, design, and culture to Abu Dhabi in preparation for the following years of preparation as the city strives to forge a name for itself as a world cultural center. “But art should not be confined to museums,” said Aoun-Abdo in a recent interview in Wallpaper. The reason behind the event, “was so that people in Abu Dhabi begin to see culture as something that they can experience in their daily lives. Abu Dhabi Art needs to create awareness and start a dialogue. For this reason we wanted to make it as broad and as accessible as possible- art and design are often seen as elitist, but with this platform we are preparing the ground for the changes ahead, informing, educating and thinking in the long term.”

Many reviews have pointed to the great sales made during the event. Among the works sold included De Kooning’s Untitled XIII from Gagosian Gallery which sold for $12 million, Gerhard Richter’s Abstract Bild at Hauser and Wirth which sold for $6 million, Calder’s La Douche at Pace Wildenstein which sold for $8.5 million, and a Keith Haring at Tony Shafrazi sold for $5 million. The prices were confirmed by the fair’s organizers but the buyers’ identities were not revealed reported Lindsay Pollack.

Taking place at the same were the first architectural tours of the developing Saadiyat Island. 1n 2012/ 2013 a 450,000 square-foot Frank Gehry-designed Guggenheim Abu Dhabi and a 260,000 square-foot Jean Nouvel-designed Louvre Abu Dhabi will open on the island both include already established permanent collections.

This entry was posted on Tuesday, December 1st, 2009 at 9:36 am and is filed under AO On Site. You can follow any responses to this entry through the RSS 2.0 feed. You can leave a response, or trackback from your own site.