AO Onsite Art Basel Miami Beach: Ai Weiwei opens a series of ‘Conversations’ with a discussion about his art, activism and twittering 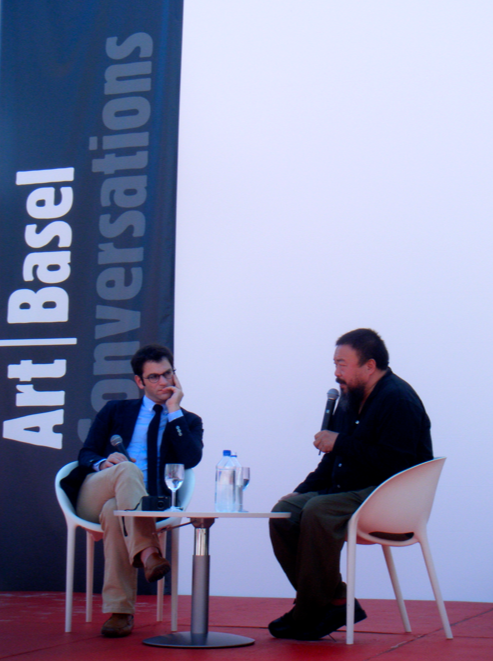 An annual event at both Basel and Miami Beach since 2004, Art Basel Conversations has hosted platform discussions ranging from single artists exploring their practice to larger panels including the leading players of the art world.  This week the renowned Beijing artist Ai Weiwei initiated the series at the new Oceanfront area at Art Basel Miami Beach.  Ai Weiwei, whose courageous voice has earned him the label as a dissident to be watched by the Chinese government, opened-up to his audience and moderator Philip Tinari about merging art and activism and the challenges he has faced in his efforts to speak freely in a land of oppression.

The most notable point of interest in Ai Weiwei’s talk is that he is currently in recovery from emergency brain surgery in Munich, resulting from a cerebral hemorrhage four weeks after being assaulted severely by Chinese policemen in Chengdu, Sichuan province, China.  After the May 2008 Sichuan earthquake Ai Weiwei embarked on a project to document and publicize the names of more than 5,000 children who had died under collapsing, ill-constructed school buildings.  The alleged attack occurred when he returned to China on August 12 this year, to attend the trial of “a friend he’d never met” – fellow activist Tan Zuoren who was charged with ‘subversion.’ Weiwei asserts that the attack occurred due to the pressures he was putting on the government to explain corruption in the construction of the schools.

Weiwei’s blog on the Chinese website Sina.com, on which he published the names of the children killed in Sichuan, was shut down by the Chinese government in May 2008 and so his online communication with the outside world have become limited to twitter on which he claims to spend anything from 6 -16 hours per day – that morning he had woken-up at 4am to begin ‘twittering.’ This year he famously posted self-portraits of himself while in hospital in Munich, he noted during his Conversation that he twitters absolutely everything – so much so that he jokingly suggested people ought to stop considering him as an artist because, “really I’m just twittering.” On a more serious note, when discussing the political nature of his work, Weiwei insisted that in order to describe your view entirely to the world art is not sufficient and that writing and blogging play an integral part of delivering a clear message to the world.

After much discussion of his activism and twittering, Ai Weiwei fired a question back to Tinari – “Can we talk about the art?” However, despite being steered by Tinari in the direction of his shows such as “So Sorry” at Haus der Kunst in Munich and other upcoming projects, what became clear is that, despite his claims that he does not make ‘political art’, Weiwei’s activism is so intrinsically entwined with his art that even he has trouble distinguishing the two.

While his ability to talk about his own art was perhaps stunted by Ai Weiwei’s coy and deviating answers, the multi-faceted artist took time to consider the works on show at the main event of the week – Art Basel Miami Beach. Weiwei recognized that what is on show at the convention center is not Contemporary art but only the product of Contemporary – “They are collectibles.”

This entry was posted on Saturday, December 5th, 2009 at 7:57 pm and is filed under AO On Site. You can follow any responses to this entry through the RSS 2.0 feed. You can leave a response, or trackback from your own site.

One Response to “AO Onsite Art Basel Miami Beach: Ai Weiwei opens a series of ‘Conversations’ with a discussion about his art, activism and twittering”