On the occasion of the 90th anniversary of the foundation of the Bauhaus, Schirn Kunsthalle Frankfurt hosts an inclusive retrospective of László Maholy-Nagy (1895–1946). The exhibition features 170 paintings, photographs, photograms, sculptures and films, presenting the legacy of the renowned photographer, designer and Bauhaus professor in its remarkable diversity.  The exhibition’s centerpieces are the artist’s Raum der Gegenwart (Room of Today), Maholy-Nagy’s progressive spatial design that brings together many of the artist’s ideas and is recreated for the first time, and Light Space Modulator, one of earliest kinetic artworks to rely on electrical power.

A figure of major significance in the history of art and design in the 20th Century, László Maholy-Nagy exercised mastery in every media he chose, be it photography, painting, stage design, typography or film making.  A “multimedia” artist born long before the era of unrestricted combination of various art forms, he possessed a rare idealistic and utopian mindset, viewing the interlinking of art and technology as means of improvement of the human experience. 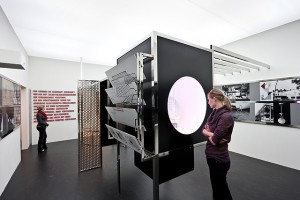 The view of the retrospective, via Schirn Kunsthalle

Born in 1895 in the town of Mohol, Hungary, László Maholy-Nagy began studying law at the University of Budapest.  With the advent of World War I, he joined the army where he began his first drawing experiments on mailing cards. Having sustained serious injuries, Maholy- Nagy was discharged in 1918 and decided to dedicate himself to art and design exclusively.  Starting out as a freelance magazine illustrator, he attended private art school in Budapest before moving to Berlin in 1920, when the Soviet Hungarian Republic was declared.The exhibition at Schirn features several Constructivist paintings as well as his work of Berlin period “Telephone Pictures” that manifest his interest in the Dada movement. 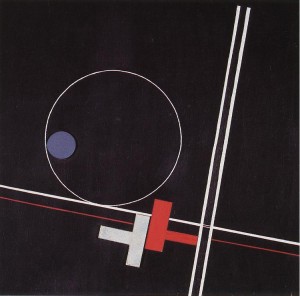 Untitled onstruction,oil on canvas, 1922 via MoMA 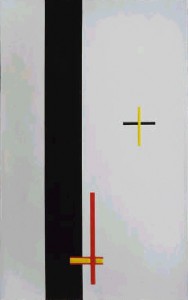 In Berlin, Maholy-Nagy soon won recognition among representatives of burgeoning Bauhaus movement. In 1923, Walter Gropios, the founder of the Bauhaus school, proposed that the young artist took charge of the preliminary course and the metal workshop. Operating in Germany until 1933, when it was closed down under the increasing pressure by the Nazi regime, Bauhaus brought together a number of the most outstanding contemporary architects and artists and was not only an innovative training centre but also a place of a large-scale artisanal production. 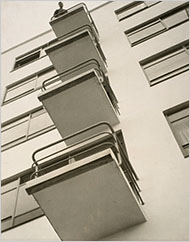 Maholy-Nagy’s educational humanistic philosophy rested upon his belief that the society can truly profit from its members that are creatively and politically active. Disseminating ideas associated with Merzkunst, De Stijl, and Constructivism among his students, Maholy-Nagy added a pronouncedly modern, technology-oriented twist to Bauhaus educational system.  The exhibition at Schirn includes a number of experimental photographs that the artist produced during his years at Bauhaus. Exposing light-sensitive paper with objects overlaid on top of it, he created a new form of photography, called photogram, which, as the artist believed would engage the viewer in the experience of modernity. 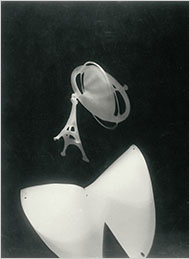 Photogram with the Eiffel Tower and Peg Top, 1928 via The New York Times

In his seminal text The New Vision (“ On Photography, Painting, Photography, Film), Maholy-Nagy says: “The camera has offered us amazing possibilities, which we are only just beginning to exploit. The visual image has been expanded and even the modern lens is no longer tied to the narrow limits of our eye; no manual means of representation is capable of arresting fragments of the world seen like this.” 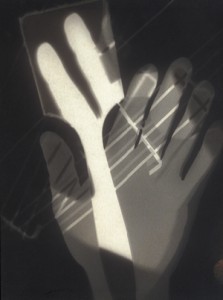 To produce the above image, Moholy-Nagy did not use any camera. He placed his hand, a paintbrush and other objects on the piece of photographic paper and exposed it to light. A popular practice among avant-garde artists, this method sought to establish the preeminence of photography as the artistic means of utmost expression.

In 1928, Moholy-Nagy resigned from the Bauhaus and worked in film and stage design in Berlin but was required to submit his work to be censored and relocated toParis and Holland before moving to London in 1935, where Walter Gropius soon joined him.  The artists planned to establish an English version of the Bauhaus, but due to lack of finance the idea failed. In London, Moholy-Nagy produced a number of kinetic sculptures and abstract light effects for the landmark  movie Things to Come, a futuristic cinematographic vision produced by his fellow-compatriot Alexander Korda.  Among these radical creations was his iconic Light Space Modulator, a “Gesamtkunstwerk” began by the artist in the early 30’s, “an apparatus for the demonstration of the effect of light and movement.”

Also called Light Prop for an Electric Stage, it was intended to create light displays for dance and theater.Powered by an electric motor and with a circular openingcut into the side, the apparatus’ collection of discs slowly revolved, casting various light patterns on the rear wall of the box.

The artist describer Light Space Modulator as follows:  “The model consists in a cubic box […] with a circular opening (stage) at the front. Surrounding the opening, on the back side of the board, I have mounted a number of yellow, green, blue, red, and white electrical bulbs […]. Insidethe box, parallel to the front, there is a second board, also with a circular opening, around which a further set of light bulbs is mounted. Single bulbs light up at different places according to a pre-set plan. They illuminate a continuously moving mechanism, made partly of transparent, partly of cut-out materials, in order to create linear shadows on the back wall of the closed box. (When the presentation takes place in a dark room, the back wall of the box can be removed and the color and shadow projection behind the box projected on a suitable screen of open dimensions.)”

In 1937, Maholy-Nagy moved to Chicago, where he became the director of the American version of the Bauhaus – IIT School of Design. His life in the United States was dedicated exclusively to teaching, design and writing. His seminal book “The New Vision” was published in 1947, a year after his death of leukemia. 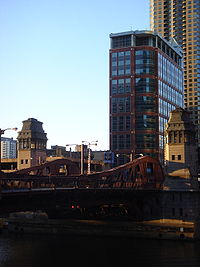 IIT Institute of Design via Wikipedia

This entry was posted on Wednesday, December 30th, 2009 at 2:00 am and is filed under Go See. You can follow any responses to this entry through the RSS 2.0 feed. You can leave a response, or trackback from your own site.