The Philosophy of Andy Warhol (From A to B and Back Again)
(Andy Warhol, 1977)
Read More and Buy↠
Home » Go See – Graz, Austria: Andy Warhol, Christopher Wool and Barnett Newman in a Group Exhibition Entitled ‘Painting Real,’ At Kunsthaus Graz through January 10th, 2010 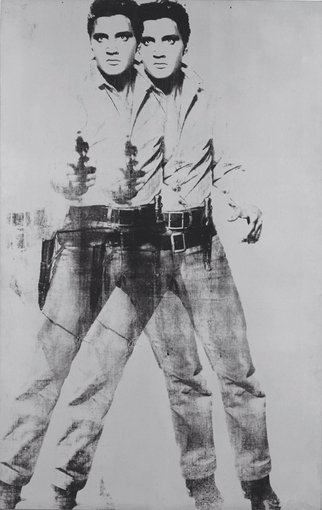 Currently showing at the Kunsthaus Graz in Graz, Austria is a group exhibition of work by artists Andy Warhol, Christopher Wool and Barnett Newman.  The show is designed to explore parallels between the three artists and to simultaneously shed light on the influence of American Abstract Expressionism on Minimalism and Pop Art.  A critical assumption underlying the exhibit is the idea that Warhol was influenced directly by Newman’s work.  Christopher Wool, one of America’s most significant contemporary painters, is brought into the comparison by way of his “Word Paintings,” which demonstrate a “mediatisation” of images and an overall radical approach to conceptual art–comparable to that of Warhol’s. Ultimately, “Painting Real” is a unique reflection on the work of Warhol and Newman from the contemporary perspective of Christopher Wool–supporting the idea that Wool’s work would never have been conceivable without the transformative work that both Warhol and Newman produced in the generation preceding him. Exploring shared themes of space, time and repetition, the exhibit functions as a kind of  historical compilation that speaks to the cumulative nature of artistic movements and the inner dynamics that propel them. 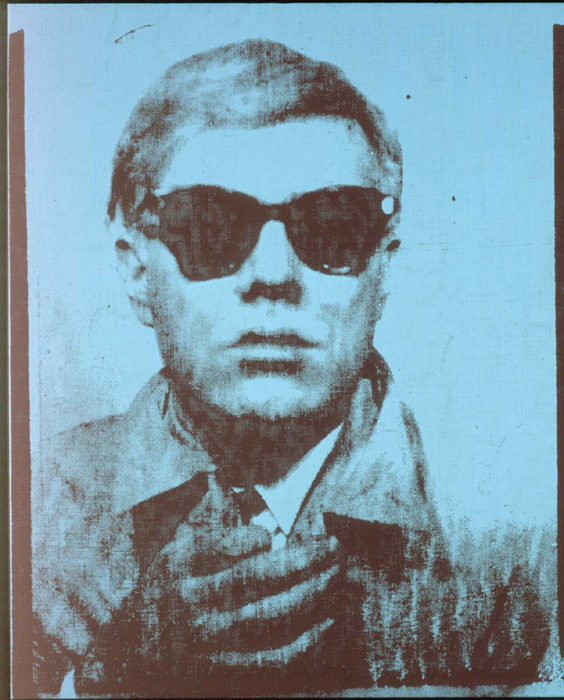 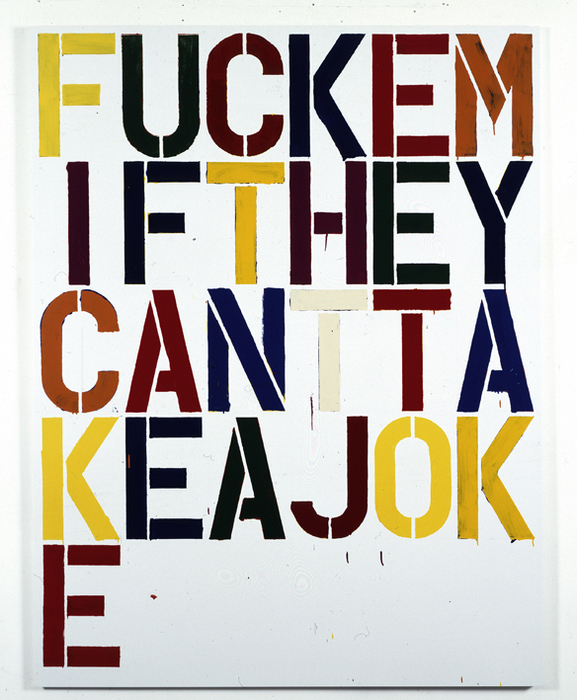 According to the museum’s curator Peter Pakesch, Warhol built upon Barnett Newman’s concept of space in all its dimensions. Newman began painting in the Abstract Expressionist style in the 1930’s and went on to develop a kind of unique, regimented technique and monochromatic palette. Like other Abstract Expressionist painters of his time, Newman focused on raw qualities of art such as color and the relationship between the canvas and the viewer. He often strove to eliminate any references to objects, figures and symbols– shifting his attention more towards space in all its dimensions–physical, mental and spiritual, and on the idea of the viewer as an active participant in that space. His style has been deemed “deceptively simple,” for being visually minimal, yet saturated with symbolic meaning.  Pop Art, for which Warhol is seen as leading representative, can be seen as a kind of logical extension of American Abstract Expressionism in the sense that it focuses on perceptions of space and time. In his silkscreen images, Warhol– like Newman, suggests that it is pointless for the viewer to search for references that link to reality, or to an independent world outside of the particular picture. Objective content is no longer discernible. This has the effect of removing meaning from the image–and most notably in the work of Warhol–the effect is compounded when the image is reproduced over and over again. 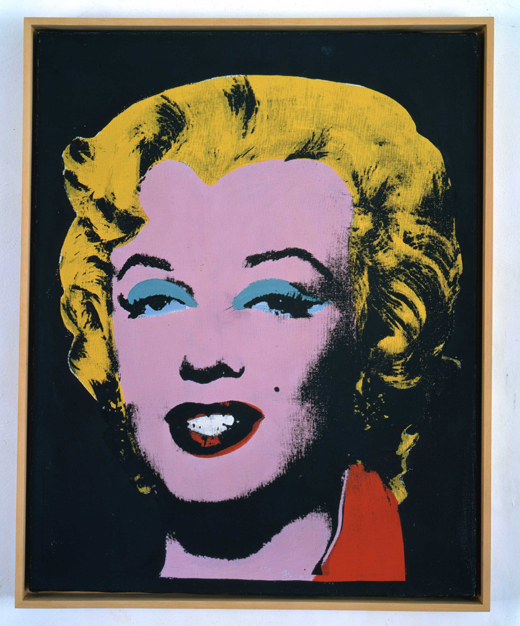 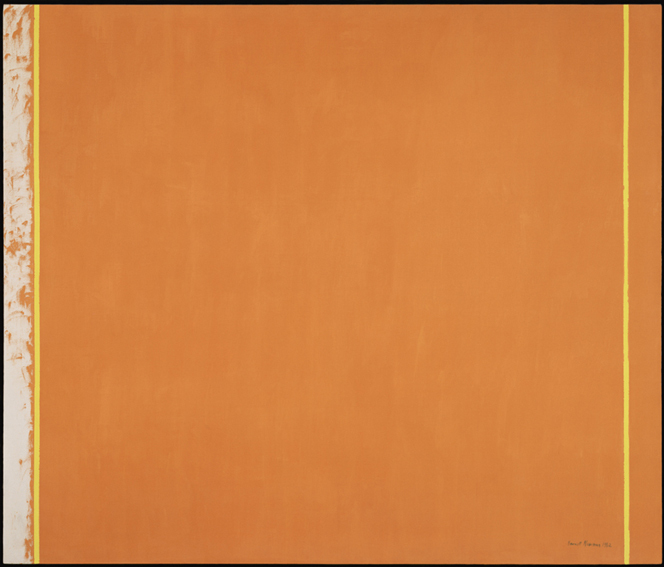 Newman chose to interpret space as color– creating large fields of color that envelop the viewer and often include vertical lines called “zips” which serve as a kind of interruption of the expanse. The artist once said “It is interesting to me to notice how difficult it is for people to take the intense heat and blaze of my color. If my paintings were empty they could take them with ease.” 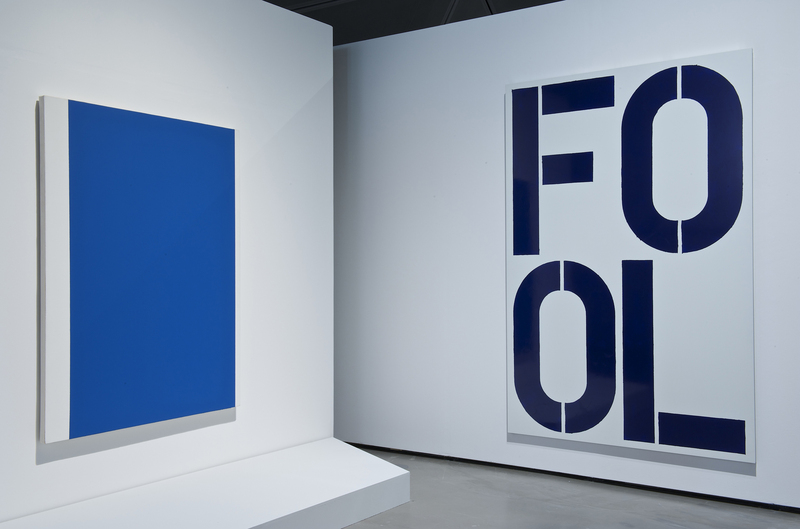 Christopher Wool’s paintings focus on the process of painting– on how to paint, rather than what. In his textual paintings, there is most noticeably a kind of physical pattern of paint, rather than a written, verbal message. His work has been said to convey a deliberate “collision” between different qualities of language–grammatical, visual, semantic and imaginary. In effect, the emotional experience rises above the contextual one and there is a resulting “failure of language” that takes place. Spiritual meaning, as in the work of Barnett Newman, prevails. 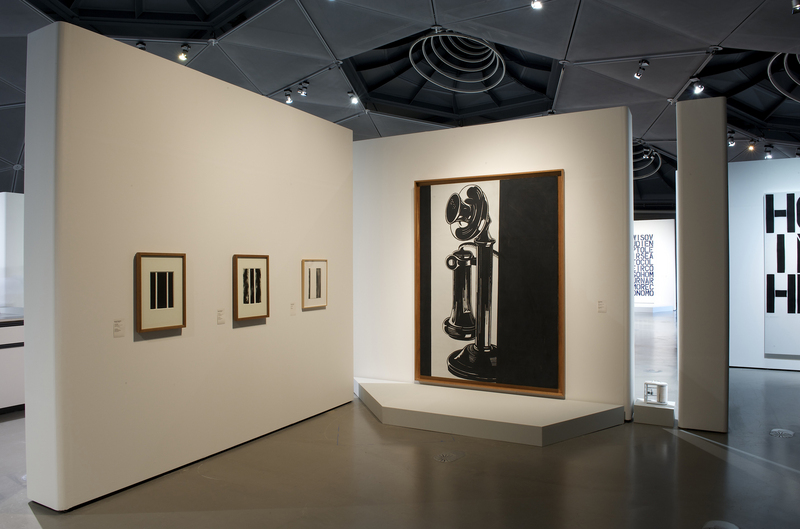 “Painting Real” will be on exhibit at Kunsthaus Graz in Graz, Austria through January 10th, 2010.

This entry was posted on Friday, December 4th, 2009 at 11:40 am and is filed under Go See. You can follow any responses to this entry through the RSS 2.0 feed. You can leave a response, or trackback from your own site.