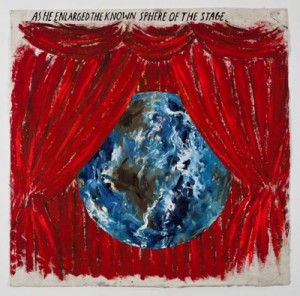 Raymond Pettibon, No Title (As he enlarged)

Raymond Pettibon brings a collection of new and early works to Sadie Coles HQ in London through January 9th. A prolific artist who has exhibited hundreds of times over a span of decades, the exhibition will convey interesting juxtapositions throughout his aesthetic formation. 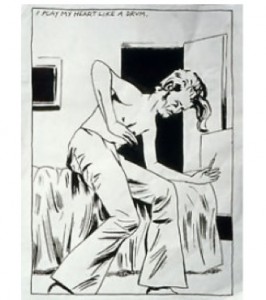 Raymond Pettibon, No Title (I play my heart)

Raymond Pettibon (formerly Raymond Ginn) founded the punk-rock band Black Flagg with his brother Greg Ginn, which enjoys a cult-like following to this day. It was in collaborating with his brother (both musically and visually) on the design of their logo,  album covers and performance flyers, that Pettibon’s interest in illustration was initially piqued. Similar groups of the punk rock movement, such as The Minutemen and Sonic Youth, soon took notice of the like stylistic nature of Pettibon’s pieces, and employed him to design covers for them as well. 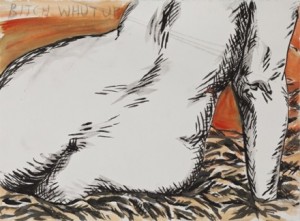 Raymond Pettibon, No Title (Bitch what up)

The combination of new work, as well as noteworthy pieces from his artistically formative years of the 80’s, speak to the viewer in direct and intentional ways. Pettibon’s newer pieces play with the viewer: a mix-tape of Pettibons greatest hits, comic book homages, sensory illustrations and other works depict commentary on politics, pop-culture and society. Unlike their earlier precedents that are bound by well-appointed thin black boxes, these later pieces are full-bleed to the edge of the paper: more exploitative and exclamatory in their choice medium, color schemes and application, their form verges with their content. 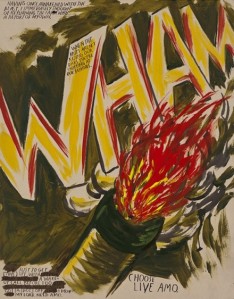 Raymond Pettibon, No Title (Having One Awakened)

Pettibon has been described as a reclusive artist who would draw hundreds of drawings a day. His fast application sensibilities, much like in Roy Lichtenstein’s works, are present in such works as No Title (Having One Awakened), where effervescent text floats across the page. 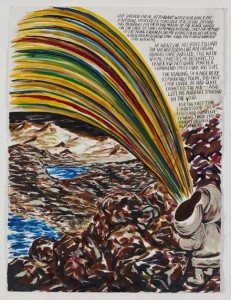 An artist influenced by jazz performance, Pettibon believes that the subject matter and composition of his pieces are inextricably linked. In the above piece, the colorful burst seems improvised and shows no sign of a predetermined palette. Yet, the background rock formations indicate a more traditional landscape requiring creative forethought. 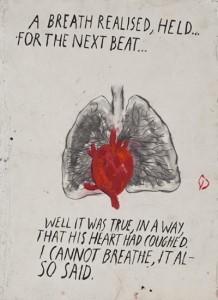 Joan LeVasseur, 26, was struck and critically injured while in an Apple Valley crosswalk on March 6 by a driver who fled the scene and is still at large, police said. LeVasseur, who was engaged to be married, was walking to Cub Foods when the accident occurred.

Her family removed her from life support Friday morning. In an entry on a CaringBridge journal Web page, the family said LeVasseur died at 4:20 a.m.

“Joan was a person who embraced life, and in her passing, she continues this legacy by donating her organs to those who need them,” her family said in a statement released by Hennepin County Medical Center, where she had been receiving care. “Thanks to everyone for their thoughts and prayers throughout this past week, and for your continued support as we say goodbye to Joan.” “It was our selfish desire to keep Joan’s heart beating and to take care of her body the rest of our lives,” the entry said. “After considering what Joan would have wanted, we knew that Joan would have not have wanted to be hooked up to life support and bedridden but would have wanted to save other families from what hers had just gone through and started the process of organ donation.” Family members said she suffered severe head trauma, brain injuries and fractures in her legs and pelvis. A “final goodbye” is planned at the Sacred Heart Catholic Church in Rush City, Minn., on March 21, the family said on CaringBridge. Details are pending.

On Thursday, police said they had recovered what they believed was the vehicle involved in the crash. A 2003 Ford Focus was found in a resident’s garage in Lakeville with “front-end damage consistent with a pedestrian accident,” said Capt. Jon Rechtzigel. The home is a little more than a mile south of where LeVasseur was hit.

Rechtzigel said Thursday that the people who live at that home were not talking to police and had secured an attorney. He said the vehicle and the residents were “closely associated,” but he declined to elaborate.

“We are working behind the scenes” to try to solve this case, the captain said.

He said a tip from the public led police to the car. go to web site 2003 ford focus

Police said little more about the case on Friday. Apple Valley police Capt. Michael Marben said that an arrest was not anticipated this weekend and that one would be unlikely to happen pending the outcome of forensic testing on the car. He declined to discuss the case further because of the ongoing criminal investigation.

The vehicle is in possession of the Minnesota Bureau of Criminal Apprehension in St. Paul for examination. LeVasseur was struck as she crossed Cedar Avenue at 153rd Street about 9 p.m. last Friday.

This entry was posted on Thursday, December 31st, 2009 at 12:43 pm and is filed under Go See. You can follow any responses to this entry through the RSS 2.0 feed. You can leave a response, or trackback from your own site.