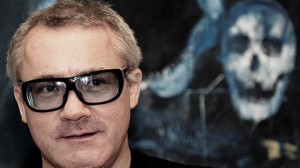 On December 17, an exhibition of Damien Hirst‘s project “The Dead” opened at Triumph Gallery in Moscow, Russia. “The Dead” is a series of thirty colored foil-block prints on paper, exploring one of Hirst’s favorite motifs – the human skull.  The exhibition is a joint project of Triumph Gallery and ABSOLUT Vodka.

Skulls on display via Popsop 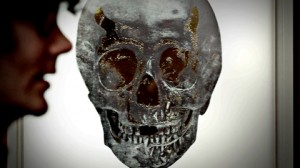 Exhibition at Triumph Gallery, via Snob

These bright works on paper, each printed in fifteen copies to the delight of Moscow art collectors, are said to have been inspired by celebration of Day of the Dead, a Mexican traditional holiday during which families celebrate the memories of the deceased family members. Traditionally, families visit the graves of the dead bringing richly painted skulls, sweets and marigolds as presents. Damien Hirst (b. 1965), a most prominent member of Young British Artists (“YBAs”), produces a significant amount of his works in a large house in Bajo, Mexico that is the artist’s part-time residence and art studio where several artists carry out Hirst’s projects. The exhibition is on view until January 17, 2010. 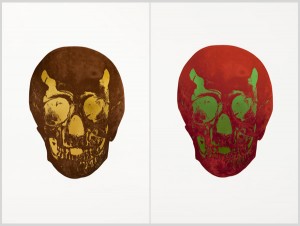 Hirst chose Death in its various forms as a favorite subject-matter in the early 1990’s.  His usage of a human skull as a symbol of mortality and brevity of life came to international prominence  in Hirst’s “For Love of God,” a sculpture that consisted of a platinum cast of a cranium encrusted with over 8000 flawless diamonds and a large pear-shaped diamond in the skull’s forehead. Costing 14 million GBP to produce, the sculpture was entirely covered with diamonds, with the exception of the original teeth of the skull. Displayed in White Cube Gallery in London, it became an art market sensation in 2007.  Hirst refered to an Aztec turquoise skull on display in British Museum, London, as a source of inspiration. 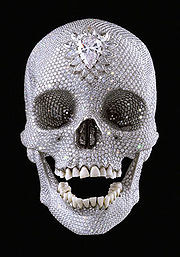 For the Love of God, via  White Cube Gallery

“The Dead” is a second Hirst’s exhibition held at Triumph Gallery. In 2006, an exhibition titled “The New Religion” and including the skull of a child cast in silver, an altar holding a cedar cross studded with gem-like pills, and a heart pierced with syringes and razor blades, was sold to an undisclosed Russian millionaire in the matter of hours. Whereas “The New Religion” highlighted the utmost importance of science and religion (which, alongside love and art, are the most important things in life, according to Mr. Hirst) ,the colorful vanitas now on display at the Triumph Gallery are called upon to remind flamboyant cynical Muscovites of the brevity of life and the irrevocability of each passing moment. 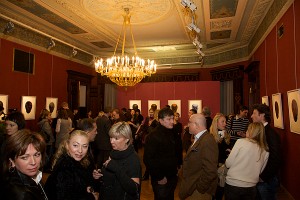 At the opening, via PopSop

Triumph Gallery has been on the forefront of Russian gallery business since 2000. Located in the 19th Century historic mansion right in the heart of the capital of Russia, the gallery held numerous exhibitions of Western artists of different époques and styles, ranging from Peter Paul Rubens to Chapman brothers. Dmitry Khankin and Emelian Zakharov, Triumph’s owners, believe that their mission it to secure Moscow’s place on the map of the international art market. One of the Russian artists represented by Triumph is the controversial Alexey Beliaev-Gintovt, the recipient of 2008 Kandinsky’s Prize, Russia’s most important award for contemporary art.  Beliaev-Gintovt’s bright canvasses of large scale that seek to resurrect the aesthetics of Russia’s Communist past and praise the policies of current repressive government caused outrage among the international artistic community. This entry was posted on Friday, December 25th, 2009 at 2:15 pm and is filed under Go See. You can follow any responses to this entry through the RSS 2.0 feed. You can leave a response, or trackback from your own site.