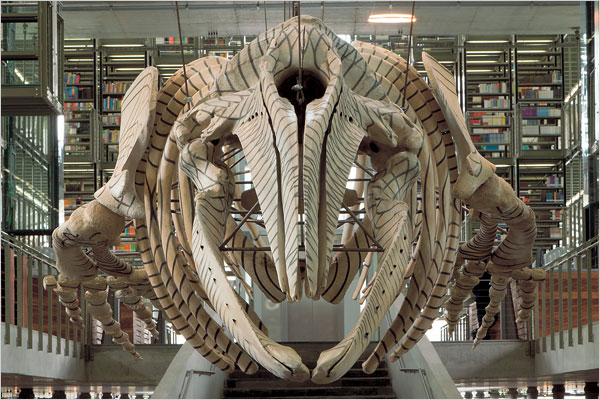 “Mobile Matrix” in situ at the Mexico City Library where the work was installed in 2006. Via NY Times

On Tuesday evening of December 15th, in the smaller of the two Titus theaters at the Museum of Modern Art, Ann Temkin enthusiastically beckoned Gabriel Orozco to take the stage. The premise of the followed conversation was, of course, the recently opened retrospective of Orozco’s lifetime body of work. At 47, the Mexican artist seemed grave and stoic in his words, although that may have been the fatigue of several weeks of preparation for the launch of the exhibition taking a toll.

Behind the Scenes: Gabriel Orozco. The artist talks about his long evolving relationship with the Museum of Modern Art and the experience of participating in a retrospective exhibition. Via MoMA

More images, text and links after the jump…

Some 16 years have passed since MoMA first introduced the fresh and innovative conceptual artist to its public.  In 1993, Orozco interspersed whimsical art pieces throughout the nooks and crannies of the museum, hung a hammock in the sculpture garden and even lit up the windows of apartments and offices across 54th Street with jolly oranges. At once lyrical and humorous, he attempted to contrast the monumental nature of art trends in the 1980’s – be it larger than life pieces of Kunst or multiples of Warhol. Reflecting a certain contempt for such over-produced art and reacting to the collapse of the 80’s art boom, Orozco was a serendipitous mystic who questioned and redefined concepts of beauty by drawing attention to unexpected details, quotidian memories and seeming putting his personal experience out for the public to devour. 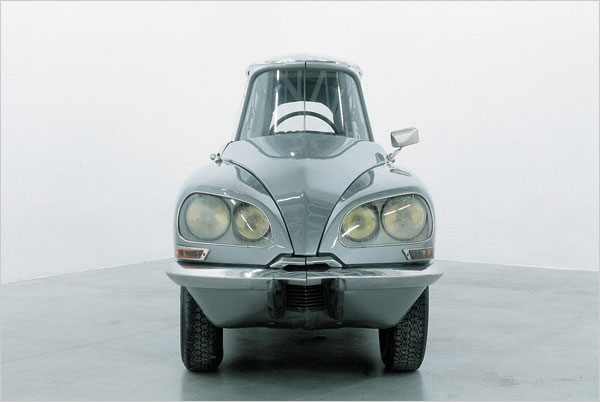 Gabriel Orozco was born in 1962 in Xalapa into a family of high artistic and leftist bent. His father, Mario Orozco Rivera, was a painter and art professor who surrounded himself with socially engaged artists and intellectuals. When Gabriel was 6, his father moved the family to Mexico City in order to work closely with renowned Mexican muralist David Siqueiros. Although the younger Orozco grew up in a politically charger environment and admired the work of Mexican muralists a great deal, he was never drawn to paint murals himself. He mostly associates the experience of assisting his father as a way to support himself and to develop technical skills. In an interview with BOMB magazine, Orozco says: “I worked as an assistant with my father on his murals, firstly because I wanted to buy myself a car and needed some money (which means that by the time I was 16 I was already quite well trained), but secondly because it’s true that I always wanted to be an artist.”

Orozco began his formal fine art studies at Escuela Nacional de Artes Plasticas at the Universidad Nacional Autonoma de Mexico, but shortly left Mexico for Madrid where he enrolled into Circulo de Bellas Artes. Finding the academy daunting and parochial, he chose to wander on his own and explore Europe and later New York and Latin America. Meanwhile he enlisted his observations and musings into a photographic medium – versatile, mobile and very much appropriate for spontaneous and malleable adventures of an artist confronting the world, his art and public space. 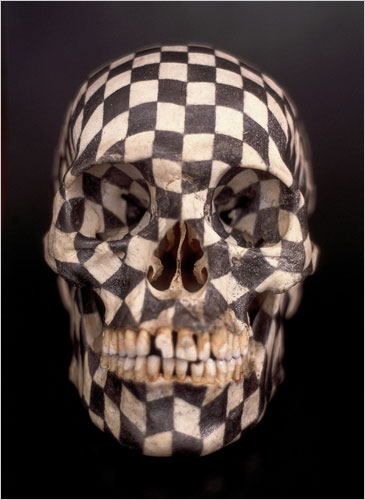 Exploring the streets of Mexico City and Madrid, Orozco collected detritus and found objects to create spontaneous site-specific sculptures and photographed them. These images became an amusing commentary of one’s relationship with public and industrial space and how one’s vision has the power to reinvent even the most banal situation. Much of it is a conscious effort as Orozco recognizes the intimate allure of his work, “I tried to face myself as an individual, as a person of a determined physique. I wanted to recuperate a sense of human scale in dealing with the public…I wanted…a sort of intimicism that was directed at the isolated individual —not only in the physical sense but also in the symbolic sense, in the way that a body leaves a mark on the landscape. In my work, I wanted to leave the mark of the human body, the mark of my own body, but I wasn’t interested in affirming a particular race, gender, creed, or anything like that. I wanted to leave that space open, to be occupied by that someone else who is looking at my work.” And so the work so varied in media, detail and approach acquires the power to touch each select individual on a complete different level. 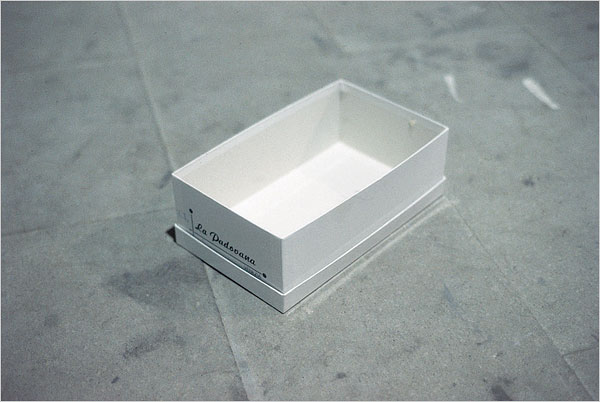 Orozco draws his inspiration from the work of Surrealists for the simple reason that it appeals to him. At the MoMA discussion with Ann Temkin and Briony Fer, he clears the fog of academic and institutional jargon by saying that “Surrelists produced the art that he liked as a child.” He speaks at length on the influence of John Cage in his perception of what art and artist could be – “free of making decisions,” as well as admiration of “discipline to not take a decision, to just breathe with life.” Perhaps, that is where Orozco’s art exudes a liberating stance. It posits itself without being arrogant. It makes one appreciate the space around an artwork as much as the art itself. Such is the case with “Yogurt Caps,” a work that is as controversial now as it appeared during the 1994 exhibition at Marian Goodman Gallery. However, the discussion now has shifted from provocative gesture of installing nothing but four clear, blue-rimmed Dannon lids to a more technical issue of procuring those exact pieces for the MoMA show. In the end, it appears that MoMa used the exhibition copies and not the original caps, which have long been sold to a private collector. The contention was a non-issue for either the MoMA curators – Ann Temkin and Paulina Pobocha – or for the Marian Goodman Gallery director, Andrew Richards, who has worked with Orozco for many years. As Mr. Richards put it: “It’s not so much the object that matters in this instance—it’s the idea.”

Gabriel Orozco is thus a collective idea of a retrospective, an attempt to compile and reminisce a series of exceptional moments and experiences. Cameo appearances are made by the fabulous “La DS,” a macho elegant symbol of French proper aesthetic re-assembled here without its middle third. Its image thinned out, elongated and stretched into a satirical comment on our skewed perception of beauty ideals, or mockery of the Fashion world? Another early work is “Empty Shoebox,” which first appeared at the Venice Biennale in 1993. Its haphazard placement follows a monstrous saturated pastiche of exhibition entrance, which features exploding clouds of smoke, tropical greenery and a cut-out face of a Himalayan child blowing a bubble gum bubble. “Empty Shoebox” is a contrast. It is a contradiction that  produces a calming and perplexing effect. It intensifies the quite emptiness of the space and provides a moment to breathe and listen. And that is all Gabriel Orozco asks – that we step back and find ourselves in space that can be both familiar and alien, strange and inviting, commonplace and extraordinary – and that we do not forget to find the magic in every breath.

The exhibition runs through March 1st, 2010.

“My Hands Are My Heart” (1991), two silver-dye bleach prints by Gabriel Orozco. Via ArtInfo

This entry was posted on Wednesday, December 23rd, 2009 at 12:01 am and is filed under Go See. You can follow any responses to this entry through the RSS 2.0 feed. You can leave a response, or trackback from your own site.