January 17th, 2022
REFERENCE LIBRARY
Home » Go See – London: Emily Prince’s ‘The American Servicemen and Women Who Have Died in Iraq and Afghanistan (But Not Including the Wounded, nor the Iraqis, nor the Afghans’ at The Saatchi Gallery, London, through May 7th

Go See – London: Emily Prince’s ‘The American Servicemen and Women Who Have Died in Iraq and Afghanistan (But Not Including the Wounded, nor the Iraqis, nor the Afghans’ at The Saatchi Gallery, London, through May 7th 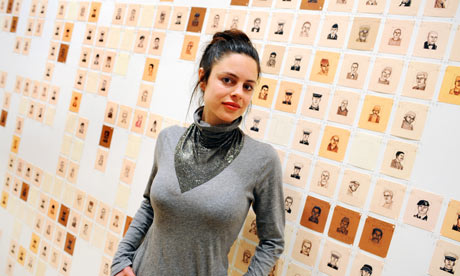 Emily Prince in front of her installation at the Saatchi Gallery, via the Guardian

An installation by Emily Prince, featuring graphite pencil miniature portraits of slain U.S. soldiers, is drawing additional attention to the wars in Iraq and Afghanistan in the wake of President Obama’s decision to send 30,000 additional troops to bolster the mission in Central Asia. The installation, titled American Servicemen and Women Who Have Died in Iraq and Afghanistan (But Not Including the Wounded, nor the Iraqis, nor the Afghans, features almost 5,300 sketched portraits and is on display at the Saatchi Gallery in London through May 7th.

The 28 year old artist, only a few years out of Stanford and UC Berkeley but who already has participated in a Venice Biennale, was motivated to draw the portraits by her frustration following George W. Bush’s re-election in 2004. “I was feeling hopeless and frustrated, and I think I somehow needed to channel that energy,” Ms Prince expressed via Bloomberg. She was also quoted by the Daily Telegraph, saying that “I am disturbed about how easy it is to be disassociated from the war if like me you don’t have a relative who is involved.”  Based in San Francisco, she will continue to produce the drawings until the conflicts come to an end.

more images text and links after the jump… 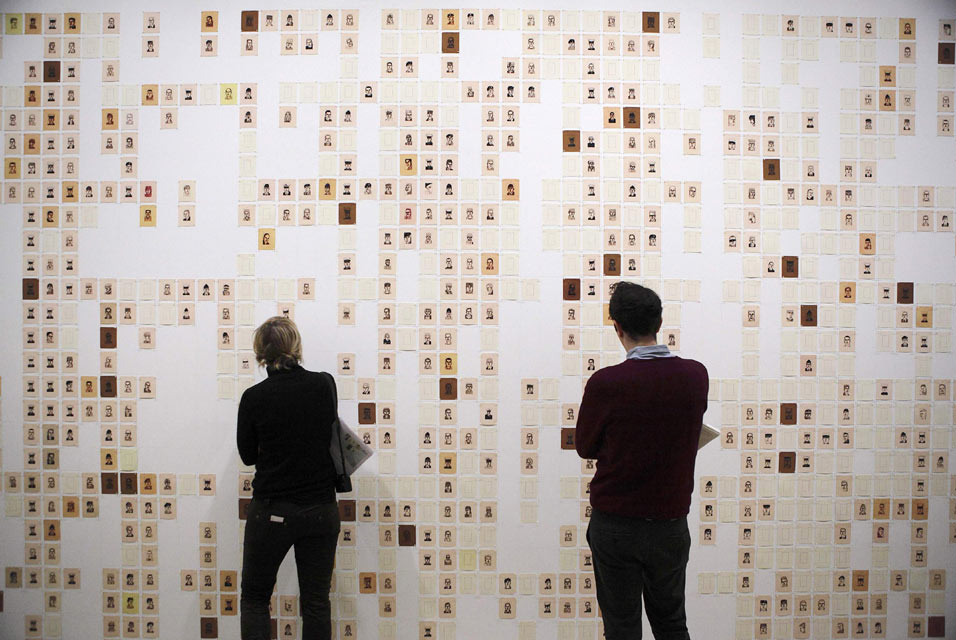 Emily Prince’s Installation American Servicemen and Women… at the Saatchi Gallery, via ArtDaily

Since the 2004 election, she has been producing drawings almost daily based on pictures taken from a military website and the Military Times newspaper. Many portraits also feature quoted text from the Military Times, written about the departed by comrades or relatives. Each card is a different color, reflecting the ethnic identity of the deceased soldier, and are laid out in columns with each column representing a week. Viewed from afar, the installation resembles a game of Scrabble.

Regarding the emotional impact of producing the drawings, Ms Prince told The Guardian that “I’m not always emotional when I’m drawing the portraits but the most moving part is reading the articles. Before I began I had a stereotype of who a soldier would be and that’s been taken apart.”

The installation first caught the attention of Robert Storr, dean of the Yale University School of Art and curator of the 2007 Venice Biennale. It was there that Charles Saatchi bought the installation, now on display at his gallery in London through May 7th, 2010. 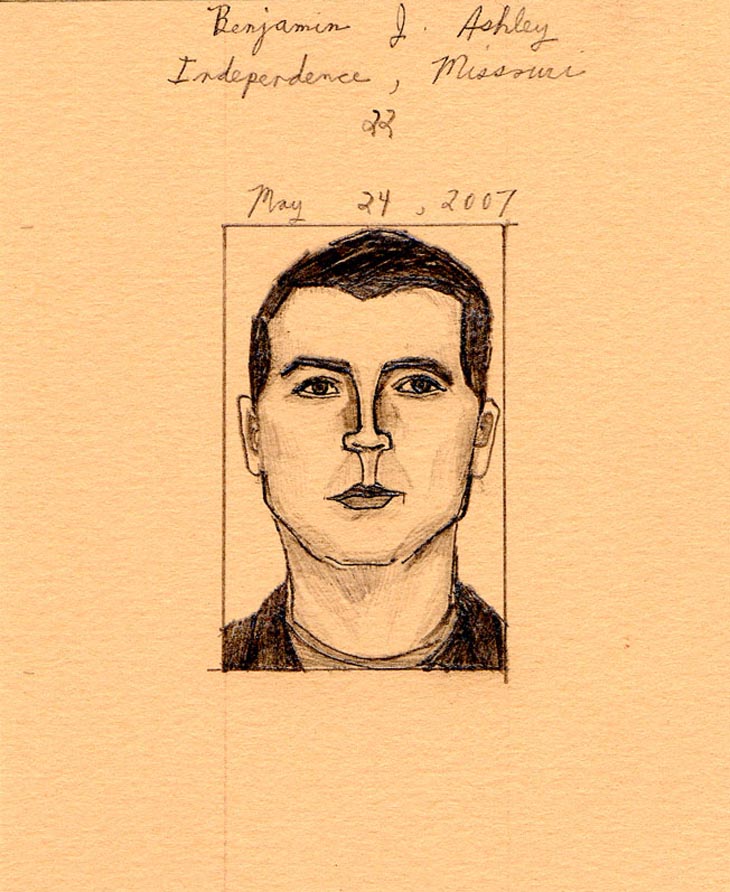 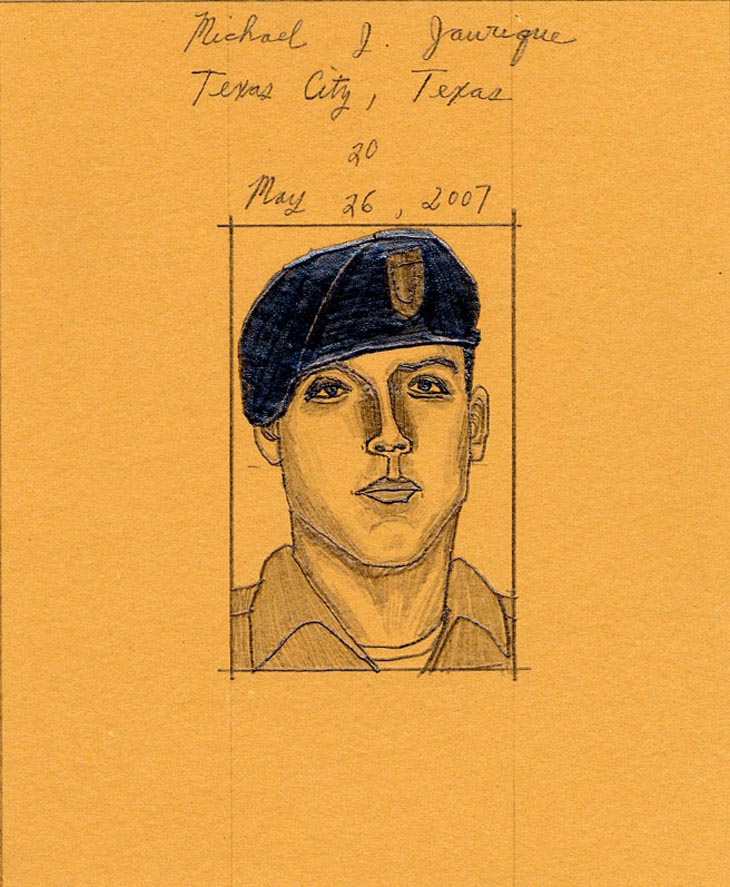 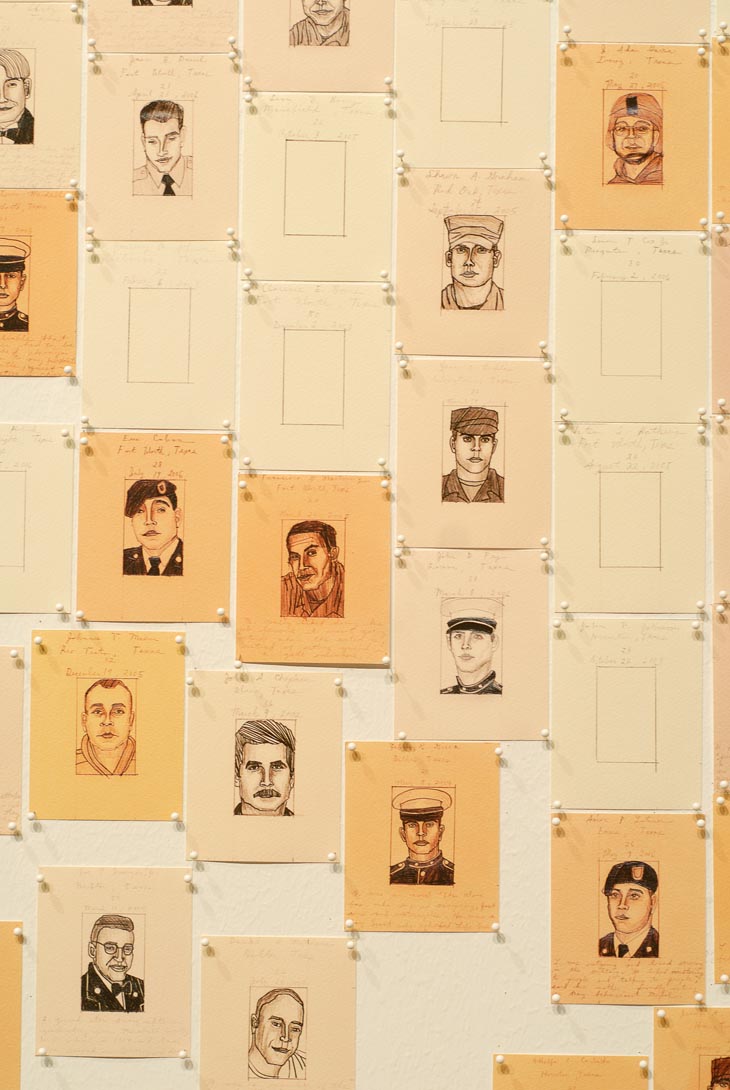 Emily Prince next to her Installation at The Saatchi Gallery, London, via Times of London

This entry was posted on Monday, January 18th, 2010 at 11:46 am and is filed under Art News, Go See. You can follow any responses to this entry through the RSS 2.0 feed. You can leave a response, or trackback from your own site.