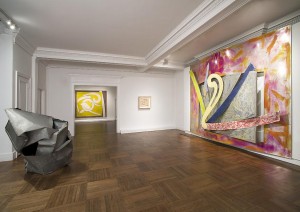 Currently on view at L & M Gallery in New York is Frank Stella’s “Exotic Birds.” The exhibition features work the artist executed in 1975  in the form of twenty-eight graph paper drawings which he then converted into Foamcore maquettes.  In 1976, he transformed the maquettes into a series of large-scale aluminum reliefs known as “Exotic Birds.” According to renowned curator William Rubin, the series signaled a transition in Stella’s work, “that was radical on the levels of both method and pictorial language.” 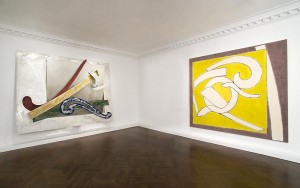 The artist used a multi-stage execution in order to realize the “Exotic Birds.” In Kagu, for example, the curving forms of the painting are not freehand drawings but actually “found objects” appropriated from the language of mechanical drawing used by architects and engineers.  Stella arranged his two-dimensional compositions until he was satisfied with the image. He then elevates the work to three-dimensional form by angling the templates against the picture frame. 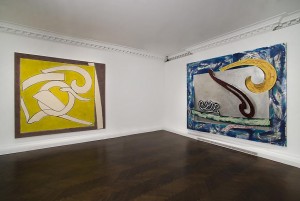 The artist’s note which are found throughout the works act almost like an architectural floor plan- directing the viewer where to turn to next and emphasizing the very mechanical and calculated process that was used for such creation. In “Exotic Birds” Stella likewise incorporates color in order to bring his very architectural compositions to life. Color also signals the end of flatness in his work. 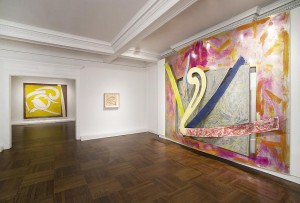 Overall, Stella emphasized such curves as objects to be seen as part of “reality.” They break through pictorial boundaries and enter the viewer’s space. In the words of the artist, “The templates start with an image value and an aesthetic existence of their own, whether or not you recognize them – as I do – as tools, I wanted to transform that, to raise the level of it from design into art, and to make it physical; in effect, to give the templates a real presence, a pictorial presence… Abstraction has to be made ‘real’ in Picasso’s pictorial sense of the word… abstraction has, in some curious sense, not to be abstract.”

THIS ELECTRONIC VERSION MAY DIFFER SLIGHTLY FROM PRINTED …

Post-Tribune (IN) April 6, 2007 THIS ELECTRONIC VERSION MAY DIFFER SLIGHTLY FROM PRINTED VERSION SCHERERVILLE JUMPING THE HEDGE: Children in grades 5 and up will watch an animated film as they see how RJ the Raccoon encourages other animals to venture over the hedge to discover a new world. The film is rated PG and is 83 minutes long. It will be shown at 2 p.m. Saturday, April 14, at the Dyer-Schererville Branch of the Lake County Public Library, 1001 W. Lincoln Highway. Call 322-4731 for more information.

LAKE COUNTY ANNUAL WINE AND FOOD TASTING: The Merrillville Education Foundation’s fifth annual wine and food tasting at the Radisson Hotel in Merrillville will be at 7 p.m. Friday, April 20. The event raises funds to provide grants for Merrillville schools to promote innovation and excellence in classroom instruction. The wine tasting features California wines with accompanying foods. Silent auctions will feature golf and other sports items, hotel getaways, restaurant coupons, wine and other gift baskets. The MHS Vocalteens and orchestra will perform. Tickets are $35 and may be purchased at any Merrillville school, the Administration Center, or the Chamber of Commerce. Call 794-1259. in our site free restaurant coupons see here free restaurant coupons

LAKE COUNTY COMMUNITY SCREENING OF ‘THE GREAT WARMING': The film “The Great Warming” will be shown in an open screening at 7 p.m. Friday at First Unitarian Church of Hobart, 497 Main St. The film examines global climate change to show how the lives of people worldwide have been altered by it. It includes comments from scientists about the need for American leadership on this issue. Doors open at 6:30 p.m.; coffee and an information discussion will follow the showing. Call Don Parker at 733-2852.

LAKE COUNTY CIRCLE OF READERS: Readers are invited to discuss “The March,” by E.L. Doctorow. This powerful novel portrays Gen. William Tecumseh Sherman’s infamous 1864 Civil War march through Georgia and its effects on the lives of many of those swept up by it. The discussion will begin at 6:15 p.m. Thursday at the Lake County Public Library, 1919 W. 81st Ave., Merrillville. Call 769-3541, Ext. 340, to register.

This entry was posted on Wednesday, January 20th, 2010 at 10:25 pm and is filed under Go See. You can follow any responses to this entry through the RSS 2.0 feed. You can leave a response, or trackback from your own site.