Currently on view at X Initiative as part of Phase 3 is a comprehensive solo exhibition of work by the controversial artist Artur Zmijewski.  It is easy to misunderstand and disprove of Zmijewski’s intentions, and easier to feel uncomfortable and conflicted by his video propositions.  This conclusive installation in a year-long experimental non-profit space marks a culmination of its mission to “inspire and challenge us to think about new possibilities for experiencing and producing contemporary art.”  Mr. Zmijewski reminds us that the experience of art can be as challenging as its production. The subject matter he explores is often heavy, the manner of delivery – raw, frank, often unedited – documentary.  The videos resemble an archive of a continuous social experiment where social situations, belief systems, reality and memory are test-driven for their endurance.

Zmijewski’s work is politically oriented as much as it is emotionally moving and complex. He acts as an activating agent by creating scenarios and situations in which initially passive and apathetic participants are galvanized and stirred, their actions documented and on view.

The first encounter with the exhibition is a gallery room occupied by 20 flat screen monitors showing footage of real-life protests and their re-enactments. “Democracies” is a conglomerate of strikes, rallies, marches, and controversial speeches from across the world. In a dark, dank space, the screens glare in a dizzying luminous light, individual messages becoming hardly distinguishable and their authenticity impossible to detect. In a world saturated with YouTube, reality television, copious news sources and blogs, we are cautioned against omnivorous media consumption lest we may lose our ability to detect the difference between reality and construct, right and wrong. “Democracies” is a US premiere of Zmijewski’s ambitious work. 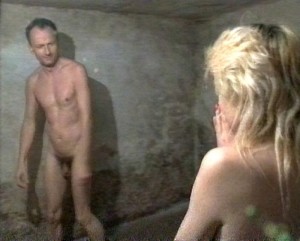 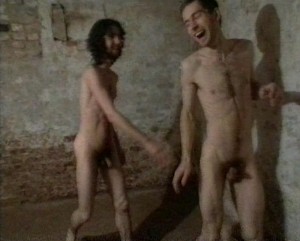 Other videos in the show raise further discussion of sociopolitical issues such as the Holocaust, the prison system, torture, disability and our perception of the Other. In “The Game of Tag” (1999), several men and women engage in a positively fun of tag. Except that a presumed naiveté of such act is clearly and immediately undermined by the nakedness of the participants, by their characteristic discomfort and by the alienating grey and bare basement in which the event takes place. As we witness this strange and incomprehensible phenomenon unfold, the senselessness and grotesque nature of it intensifies. The video ends abruptly and a brief note states that part of the film was recorded in a former concentration camp gas chamber.

In “80064”, Zmijewski convinces an Auschwitz survivor, Josef Tarnama, to refresh his tattoo of the concentration camp number. The issue of Holocaust memory is addressed. While Zmijewski intended the work to act as “opening the door of memory” to evoke “an eruption of recollections“, it is done at the expense of a human being. Mr. Tarnama hesitates and doubts the necessity of this action, but is persuaded by Artur Zmijewski’s entreaties. When the deed is done, he appears ambivalent and resigned. 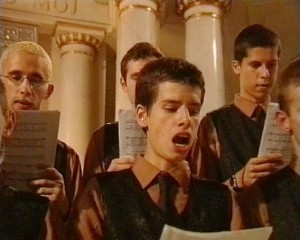 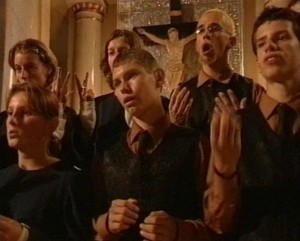 Several more probing videos are presented, including “Repetition,” a re-enactment of the Stanford Prison Experiment from 1971 where ordinary people were placed in roles of prisoners and prison wards. “The Singing Lesson” follows the progress of a deaf-mute choir as they struggle and rejoice in preparing for a choral performance.

The artist, born in Warsaw in 1966, is relatively unknown in the US but has exploded onto the scene in full force having an earlier and concurrent show at The Museum of Modern Art titled Projects 91: Artur Zmijewski (October 28, 2009 – February 1, 2010). Mr. Zmijewski represented Poland at the 51st Venice Biennale in 2005 as well as participated in Documenta 12 in Kassel and the Moscow Biennale of Contemporary Art in 2007.

This entry was posted on Tuesday, January 19th, 2010 at 5:41 pm and is filed under Go See. You can follow any responses to this entry through the RSS 2.0 feed. You can leave a response, or trackback from your own site.