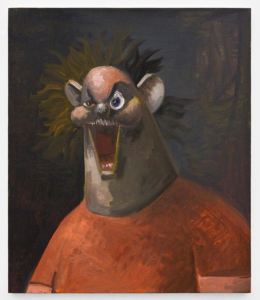 Sprüth Magers Gallery in Berlin is hosting “Family Portraits” – an exhibition of new works by American contemporary artist George Condo.  Condo’s most recent exhibition at Sprüth Magers took place in 2008, at the inauguration of Sprüth Magers’ new Berlin premises. In 2010, Condo brings to Sprüth Magers a series of figurative oil paintings. His collaboration with this renowned German gallery began as early as 1984 in Cologne, where Condo was briefly a member of the group “The Young Wild” (Die Jungen Wilden), whose colorful palette and highly expressive pictorial style starkly differed from then-popular Conceptual art and Minimalism. Drawing the inspiration from classic art ranging from Diego Velasquez to Pablo Picasso, the members of the group incorporated the elements of graffiti and comic books into their work. Condo’s genre of choice is grotesque portraiture, where Cubist-like distorted facial features successfully co-exist with imposing compositions reminiscent of the 17th Century Old masters.

The exhibition at Sprüth Magers features twenty five large-format oil paintings, produced in 2009, where Condo, with the lavishness of a court-painter of Baroque era and acerbic humor of a modern-day New Yorker, continues to exercise his bizarre outlook on his contemporaries. His portraits blend art history with elements of pop culture to arrive at a complex whole that he himself describes as ‘artificial realism.’ An exceptional painter in the traditional sense, Condo pays serious attention to shades of color, light and brush strokes, only to bring down the magnitude of his portraits by stretching, enlarging or otherwise comically deforming his unfortunate unknown sitters. Ostensibly devoid of compassion to his fellow-men, Condo’s paintings treat psychology and physiology as two interrelated complex topics, exposing the ambivalent nature of human expression. 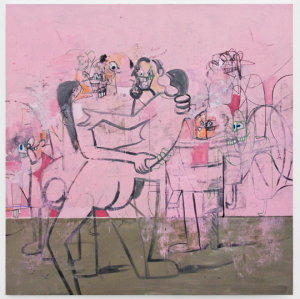 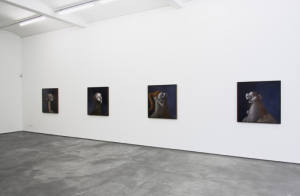 Several large-format pencil drawings are included in the exhibition together with several bronze gold-patina sculptures that demonstrate the artist’s equal mastery in various media and the fact that his renowned imagination, observation, and dark humor show no sign of decline. 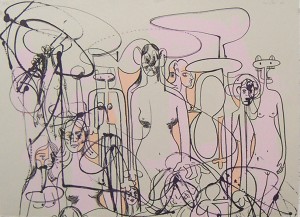 Born in 1957 in Concord, New Hampshire, George Condo came into prominence in the early 1990’s, when he relocated to New York and began collaborating with  members of Andy Warhol’s Factory including Julian Schnabel, Jean-Michel Basquiat and Keith Haring as well as with the heroes of the Beat Generation, William S. Burroughs and Allen Ginsberg.  He has exhibited extensively in both the United States and in Europe including exhibitions at The Whitney Museum, The Museum of Modern Art, NY, Contemporary Arts Museum, Houston TX, The Guggenheim, Albright Knox Museum, Fonds National d’Art Contemporain, Ministere de la Culture, Paris, Museu d’Art Contemporani, Barcelona The Museum of Fine Art, Houston and most recently at the Kunsthalle Bielfeld in Germany. In 2000, Condo’s work became subject of the documentary Condo Painting, directed by John MacNaughton. His work is in the permanent collections of The Museum of Modern Art, The Whitney Museum, and The Solomon R. Guggenheim Museum. 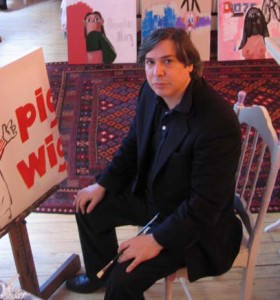 This entry was posted on Saturday, February 13th, 2010 at 9:44 am and is filed under Go See. You can follow any responses to this entry through the RSS 2.0 feed. You can leave a response, or trackback from your own site.