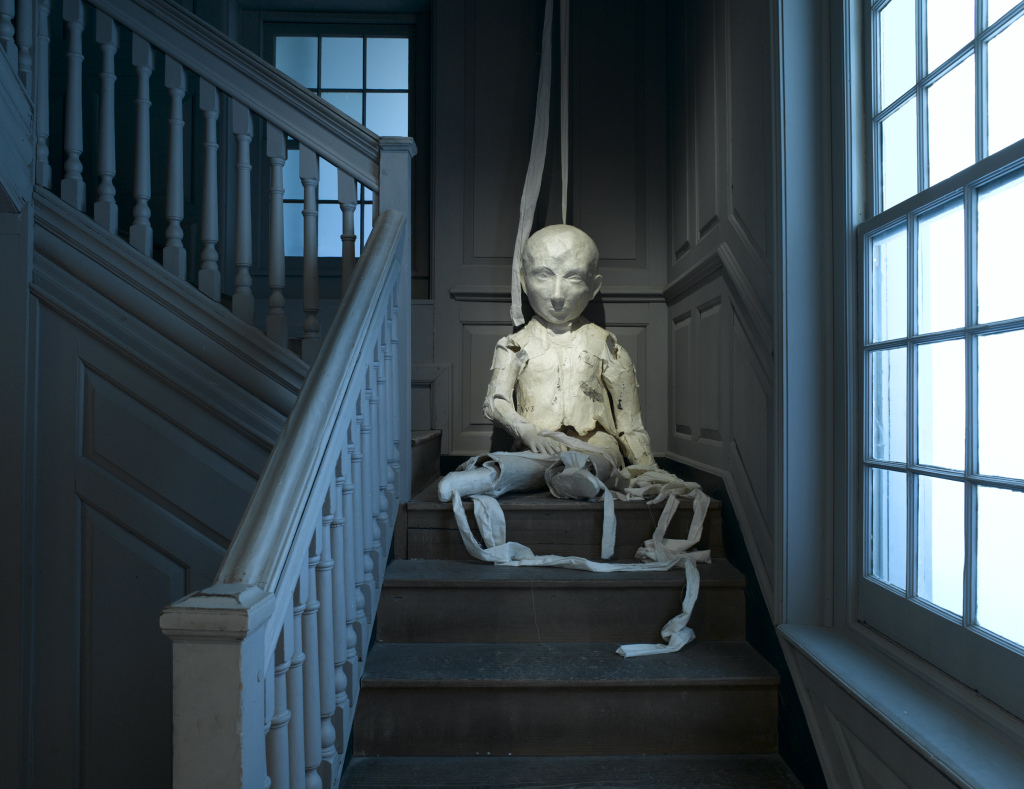 On February 11th ArtObserved was on-site at the media preview of Kiki Smith’s latest lofty installation based on her thoughts on the passage of one’s life and artistic development. ‘Kiki Smith: Sojourn’ is on view at the Elizabeth A. Sackler Center for Feminist Art, The Brooklyn Museum, through September 12, 2010, marking the fourth site-specific installation as part of a grand, long-term project. Other venues included Museum Haus Esters, Krefeld, Germany (March 16–August 24, 2008) and traveled to Kunsthalle Nürnberg (September 18–November 16, 2008) and Fundació Joan Miró, Barcelona (February 19–May 24, 2009). 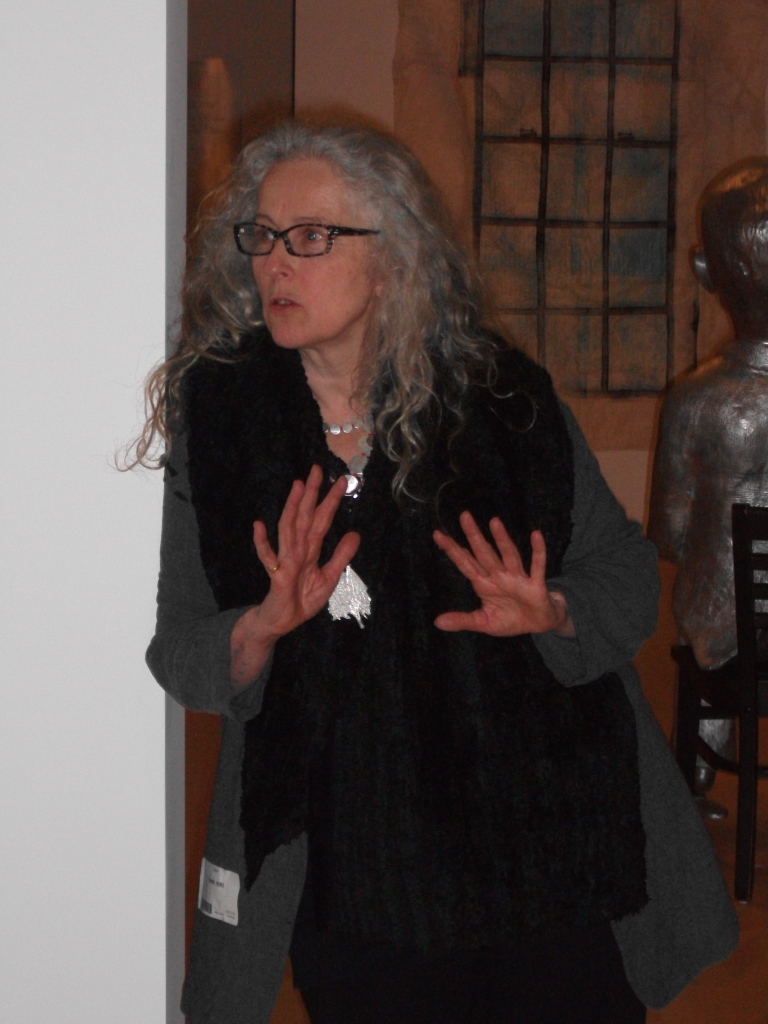 ArtObserved in conversation with Kiki Smith at the opening of “Kiki Smith: Sojourn”, The Brooklyn Museum 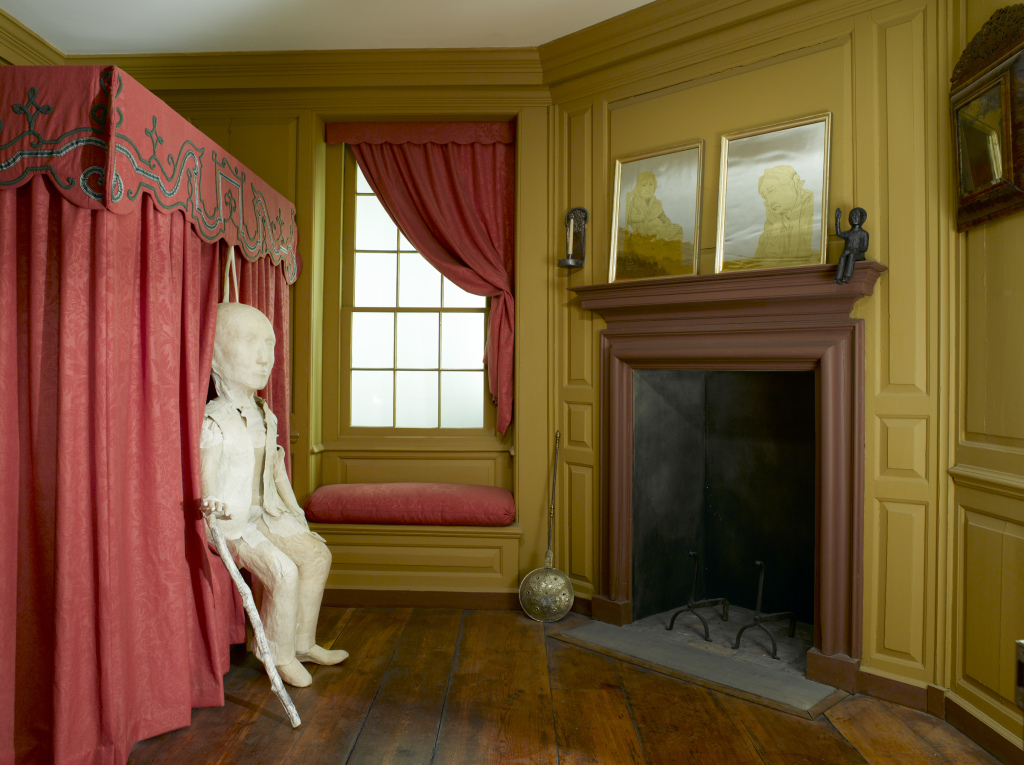 The genesis of this exploration was a chance encounter with a highly unique eighteenth-century New England needlework, Prudence Punderson’s The First, Second and Last Scenes of Mortality (Connecticut Historical Society, Hartford). This work is exceptional in its portrayal of a woman’s creative life; instead of the acknowledged rites of passage for women, including marriage and childbearing, Punderson has depicted a woman in the act of creating. Kiki Smith, taking this piece as a starting point, has extended her focus across a variety of universally applicable experiences, stretching from the obvious: birth and death, to the minutia of daily life: domestic chores. Within this context she conflates an artist’s creative journey with stages of one’s life. Birth becomes a creative awakening; youth represents an artistic exploration, maturity is the creative acme, which is followed by old age and finally death. 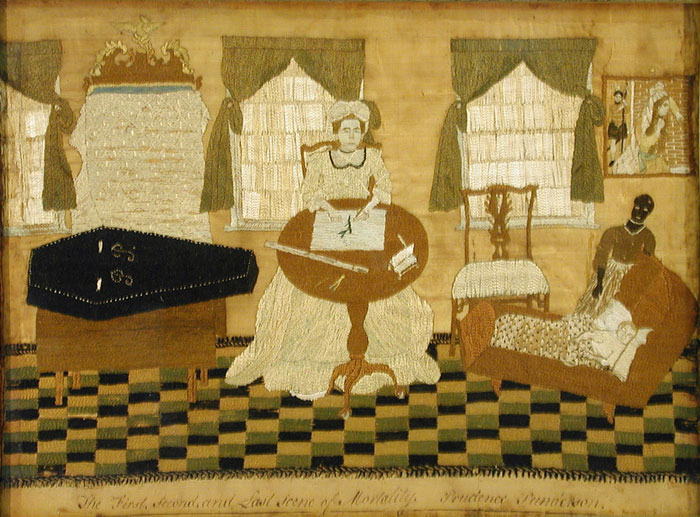 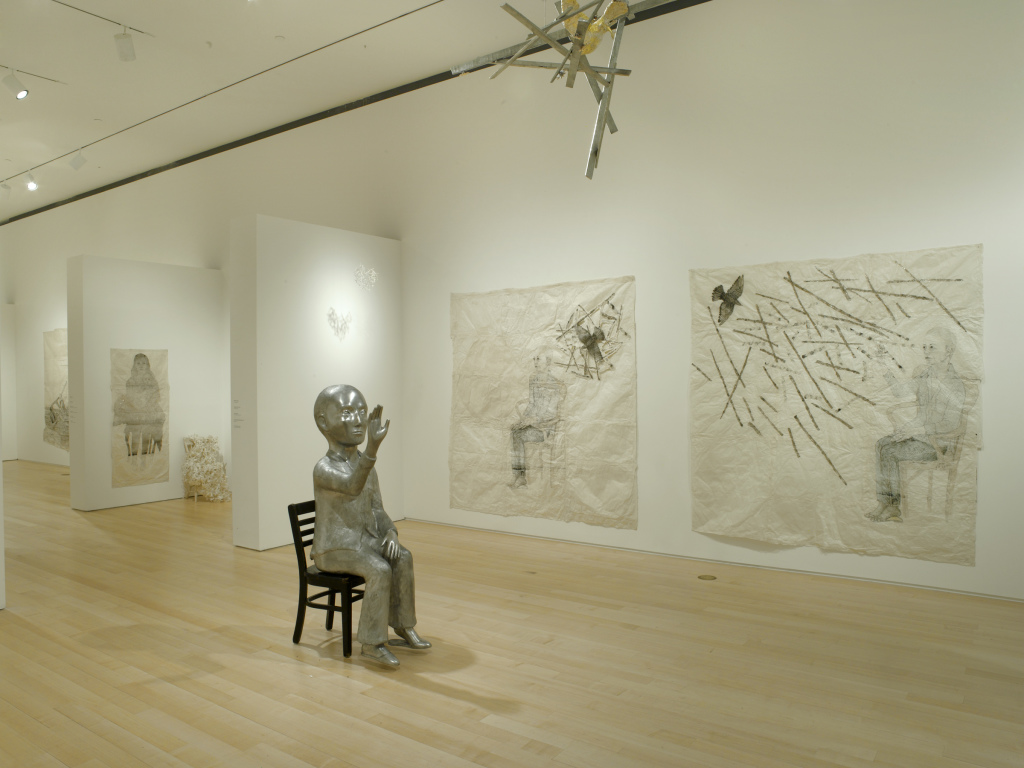 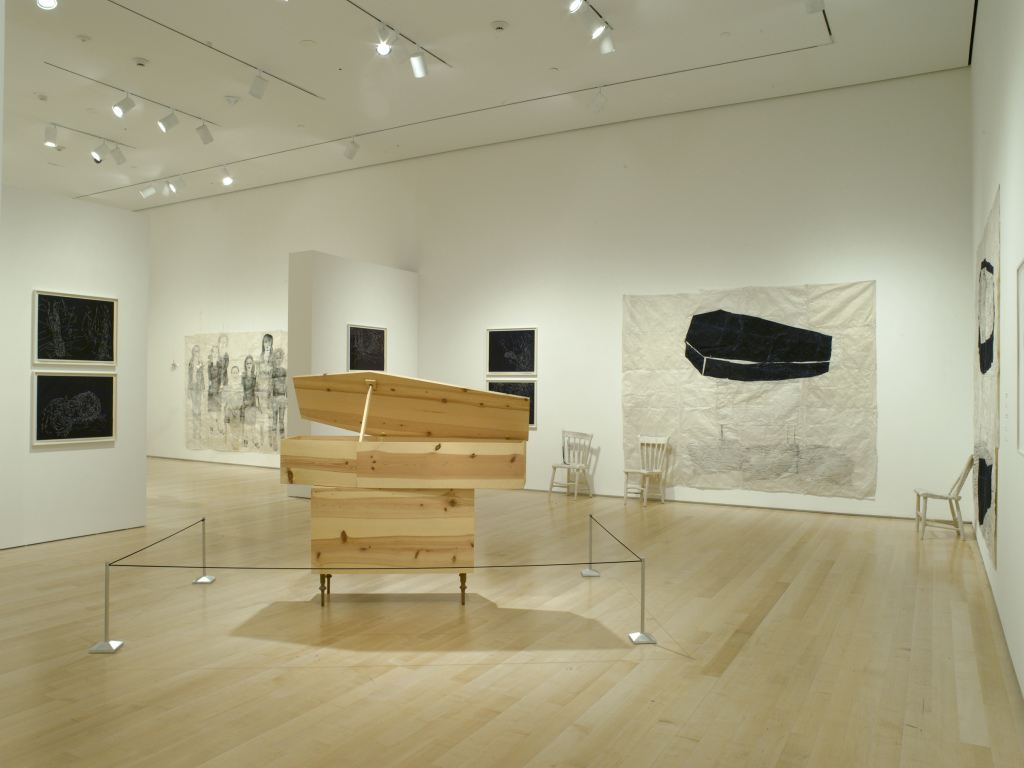 This large exhibition extends over several segmented galleries and two of the museum’s eighteenth-century period rooms in the nearby Decorative Arts galleries. The period rooms, which visitors are encouraged to view first as a kind of visual prologue, are possibly the most successful in the entire exhibition as the transportation into another person’s life is total. The enclosed, interior space and dim lighting create an intense viewing experience. Catherine J. Morris, organizer of the exhibition and curator at the museum, said of the use of space: “The notion of space has a particular resonance for women artist’s throughout history. Their artistic impulses have long been constrained… In the British author Virginia Woolf’s 1929 essay “A Room of One’s Own,” she asserts that privacy and personal liberty are vital to the success of creative pursuits. Space, therefore, is the key to artistic inspiration.” Thus we are encouraged to understand the private domestic interiors as an important space for women artists to negotiate as part of their creative pursuits.

The moment of creative inspiration, rendered as the annunciation (a key passage in the Virgin Mary’s life cycle), in the main gallery is an attempt to link, as Morris describes it, “artistic vision and spiritual experience”. Yet, in actuality it is a grand allusion, not just to spirituality but also to religion, which potentially sits uncomfortably with our contemporary conception of the artist. Prominent twentieth-century artists, most prolifically Duchamp and Warhol, actively sought to destroy romantic (or Romantic) notions of the artist; and now the authority and autonomy of the artist is generally diminished. What is more, the conflation between the moment of inspiration and the annunciation within the specific context of a woman’s life also feels problematic. The annunciation strikes one as a religious experience that is enforced and out of the woman’s control. Morris explains, “Ultimately, Sojourn, suggests the creative potential of women limited by obligations and propriety as it explores Smith’s own ideas of how inspiration reveals itself in women’s literal and metaphorical space.” 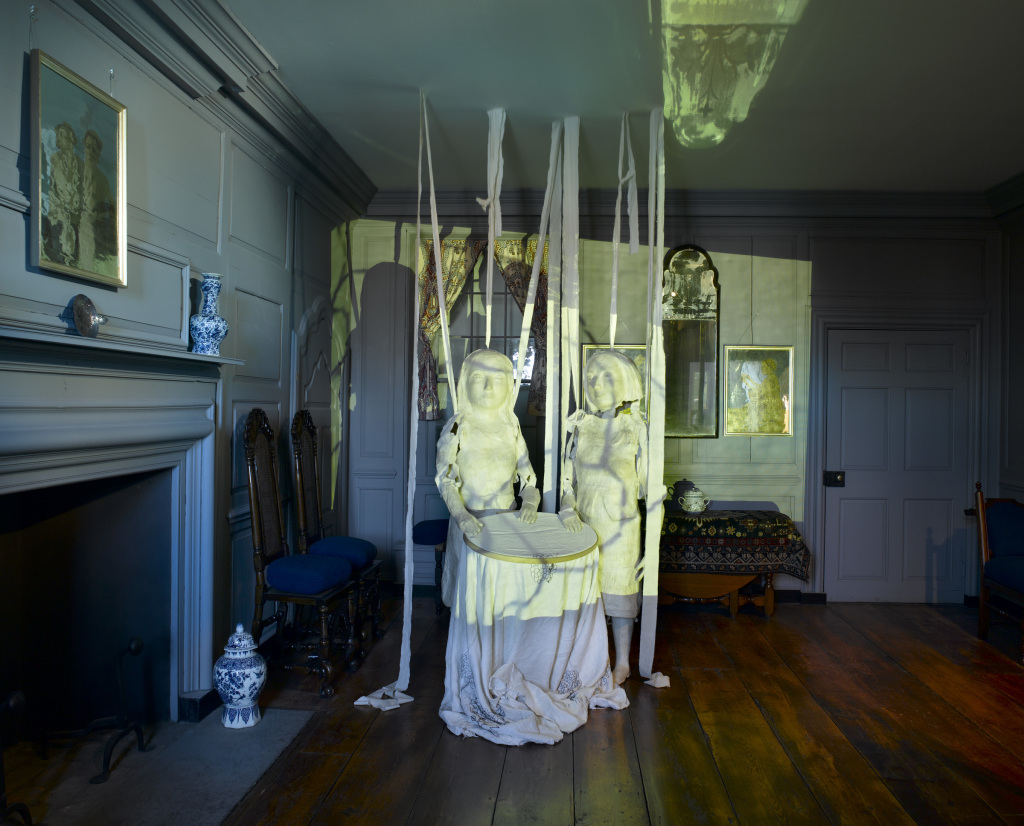 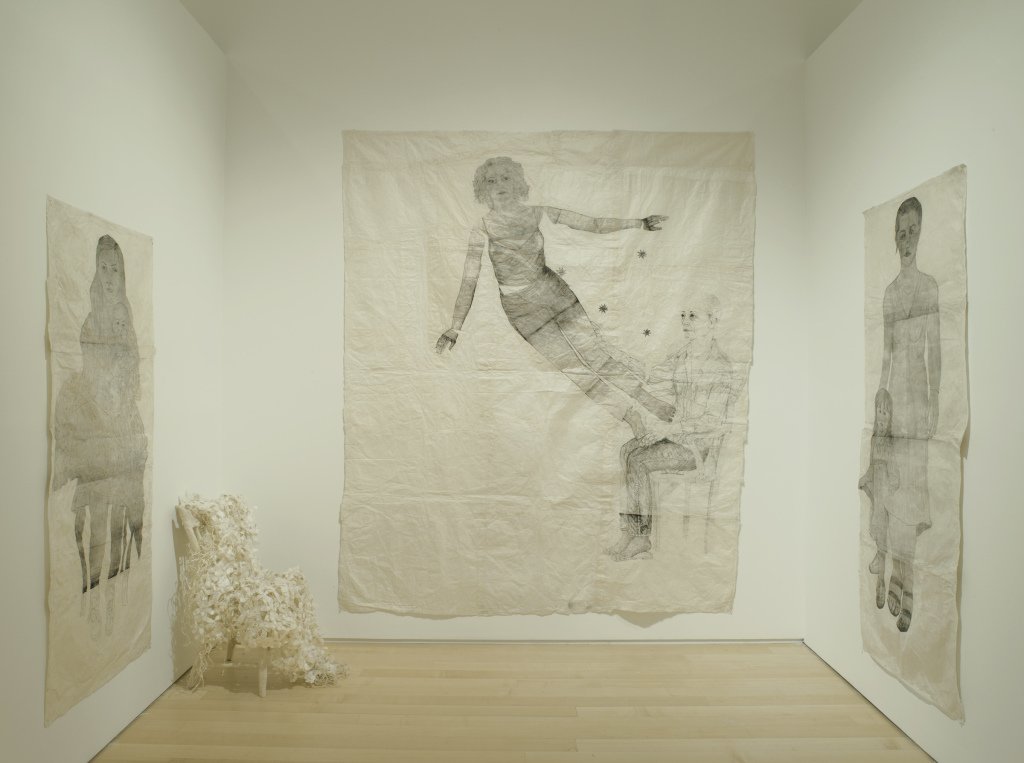 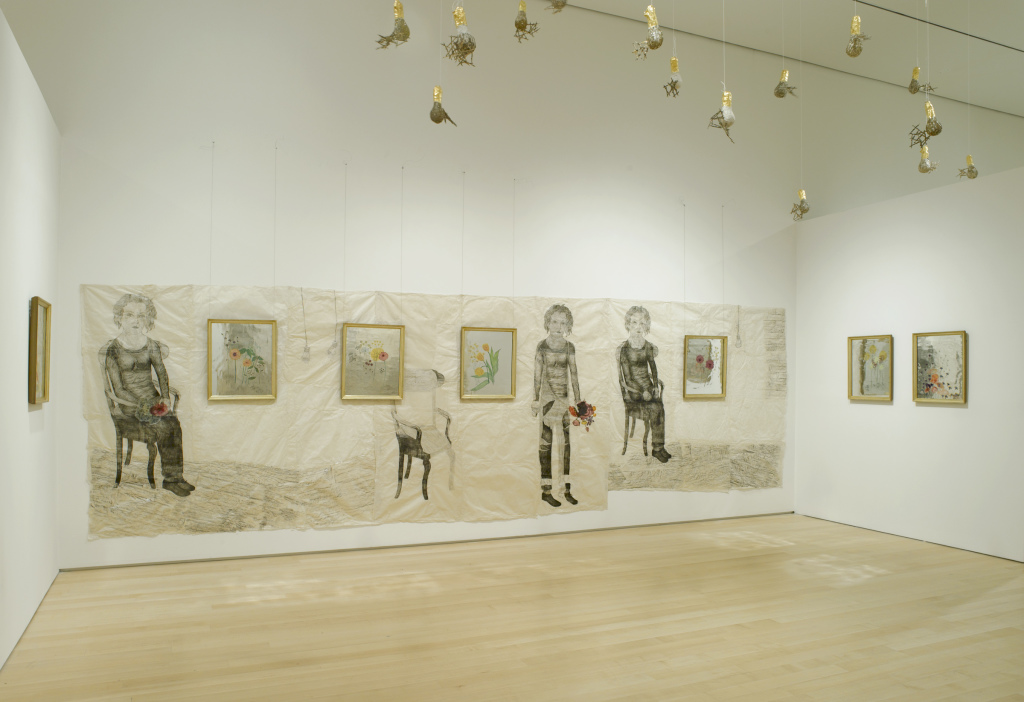 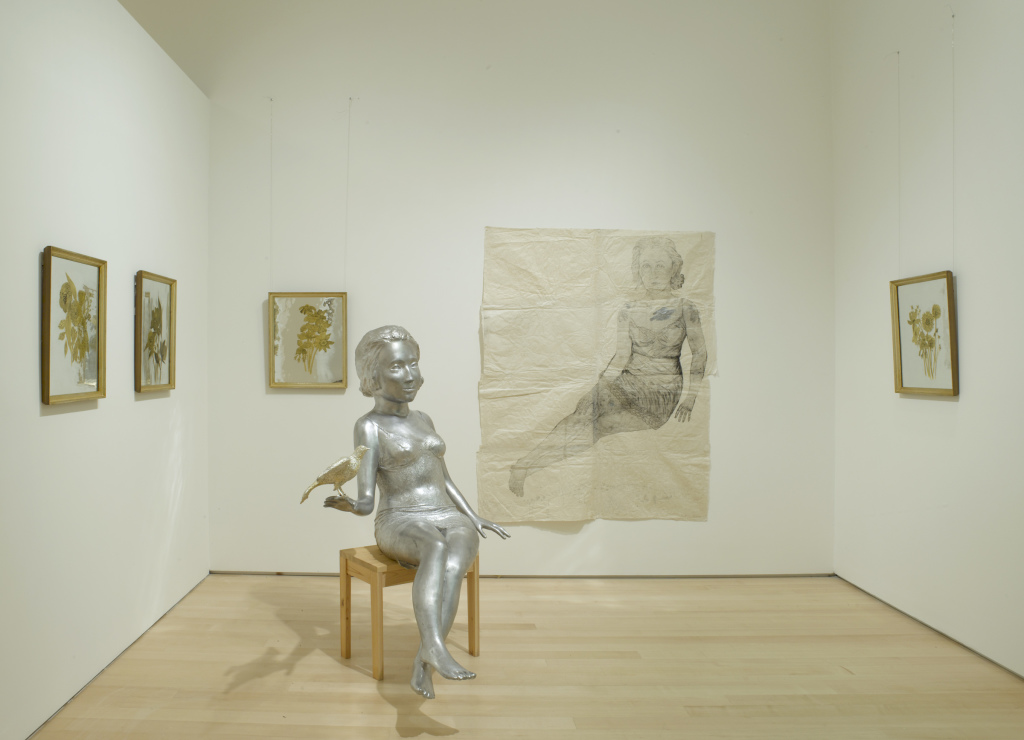 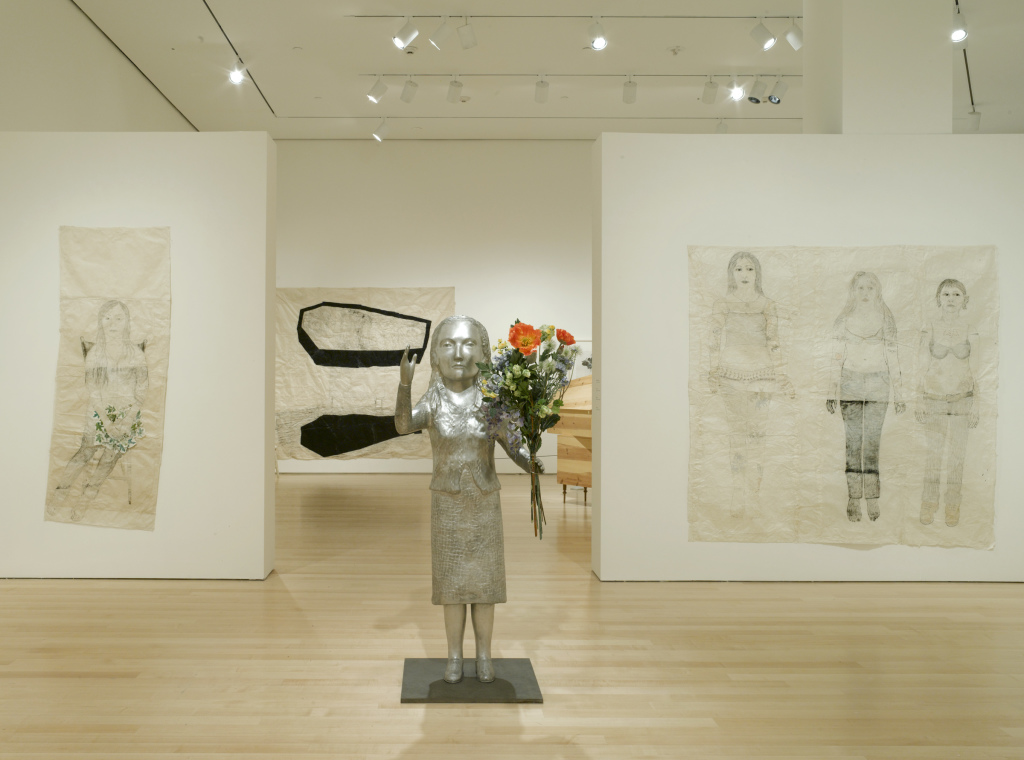 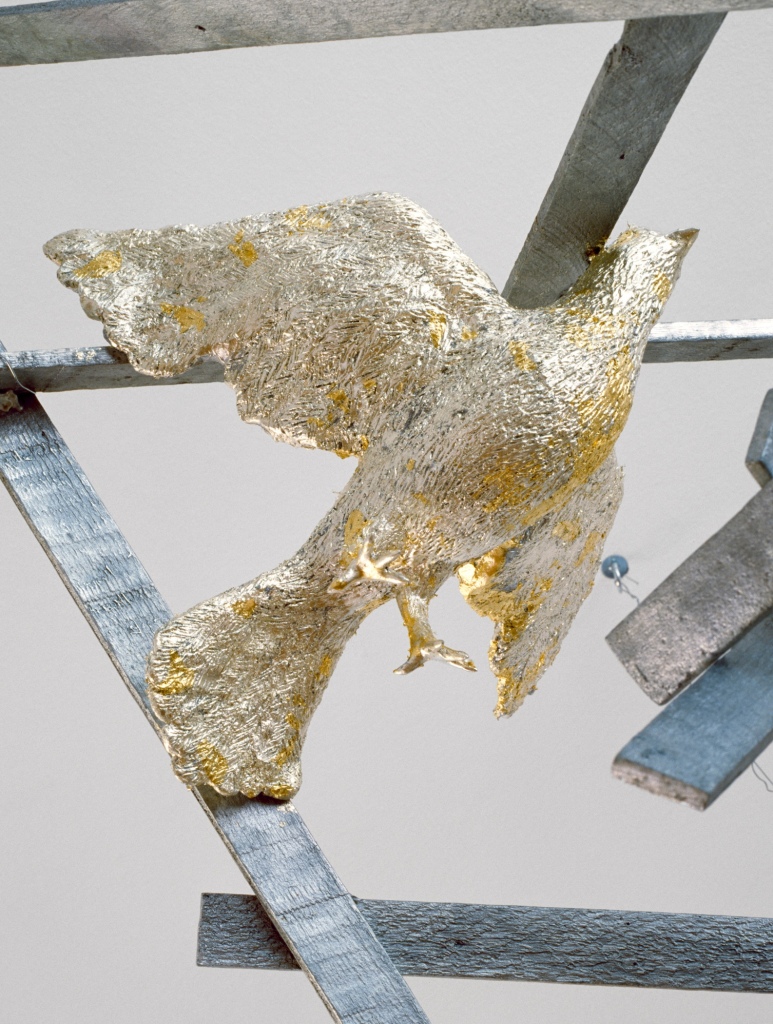 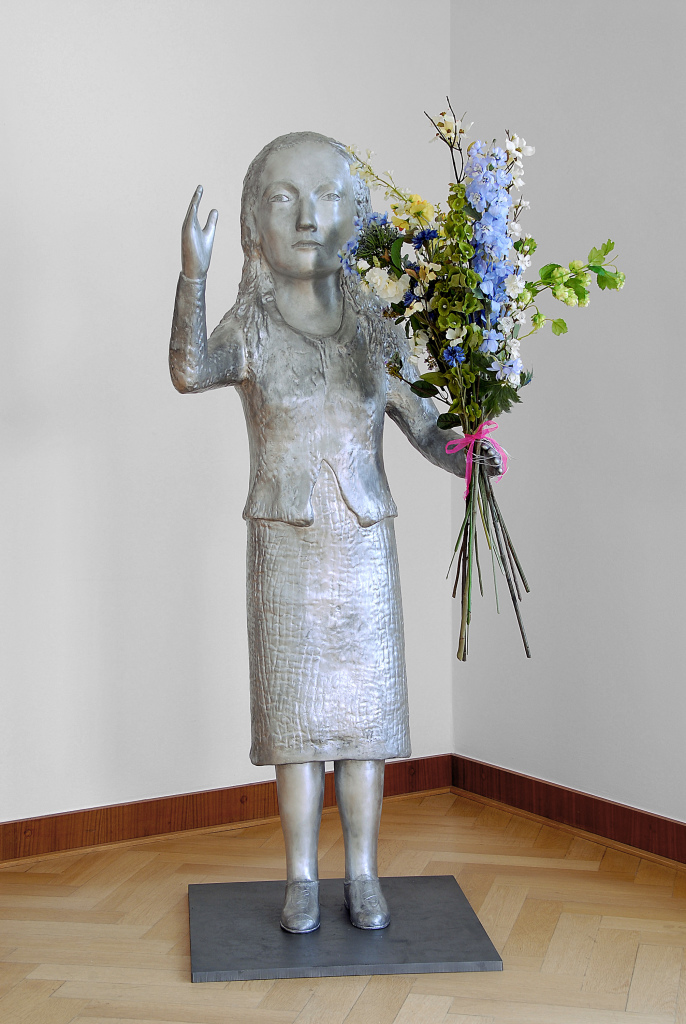 Considering that the context for this exhibition is within the Elizabeth A. Sackler Centre for Feminist Art, do you believe that the creative process, or journey, is gender specific?

Well I think that 99.9 per cent of your life is not gender specific. However, it is still true that women have much less creative representation than men. America is better than elsewhere in the world but it is nonetheless true.

In my work I am interested in the experience of women, and the works are also convolutedly self-reflective; thus the works tend to feature the experience of middle class, white women. But in terms of practicing art, no, I do not think that is dictated by one’s gender. People, regardless of gender, choose to be dedicated to their practice.

On the other hand, I am compelled by stereotypically gendered art forms, for instance handicrafts like tapestry or other art forms that historically spring from domestic life, needlework, etc. Nevertheless, those decorative bulbs hanging behind you [part of the installation as a whole] are made using techniques I learnt in nursery school – just pasting and covering in glitter. I like the majority of my works to be accessible in terms of how they are made. I do not believe in inherent [artistic] ability.

Going back to you talking about the poor representation of women creatively, would you say this installation is making amends historically or canonically. I feel like there is a historical resonance to the exhibit – that it is a comment on women’s creative identity within history.

Well I always like to return to my old joke that historically most women represented in art are reclining, naked and eating fruit. Because of that I think there is an enormous space in art that has not been covered. All materials and subjects should be equal in art, therefore we should investigate women’s experiences or craft-based materials – there shouldn’t be a hierarchy in art. This is what I think we learned from the 1960s and 70s.

I also, almost more than historically referencing, like to make cross-cultural references. For instance, with the annunciation that was partly borne of my own experiences being brought up as a Catholic; I really like the related cultural symbolism, as well as, the decorative quality of the resultant artworks. At the same time I looked at androgyny in Chinese art – so I made my figures quite androgynous.

So finally what is the significance of the title ‘Sojourn’, which seems comparatively short compared to the length of a lifetime?

I’ve always liked Sojourner Truth’s name not only because it’s a terrific name, but because she chose it, she made it. For a woman to choose her own name seems to me an incredible thing. It’s a radical and a spiritual name. And I like the fact she’s complex – I like complicated people. It is certainly one of the most beautiful names I’ve ever heard. I have titled a lot of things Sojourn after her.

Also we are, after all, just visitors in life. A sojourn can refer to all or any aspect of that, for instance walking a gallery or movement through a landscape. 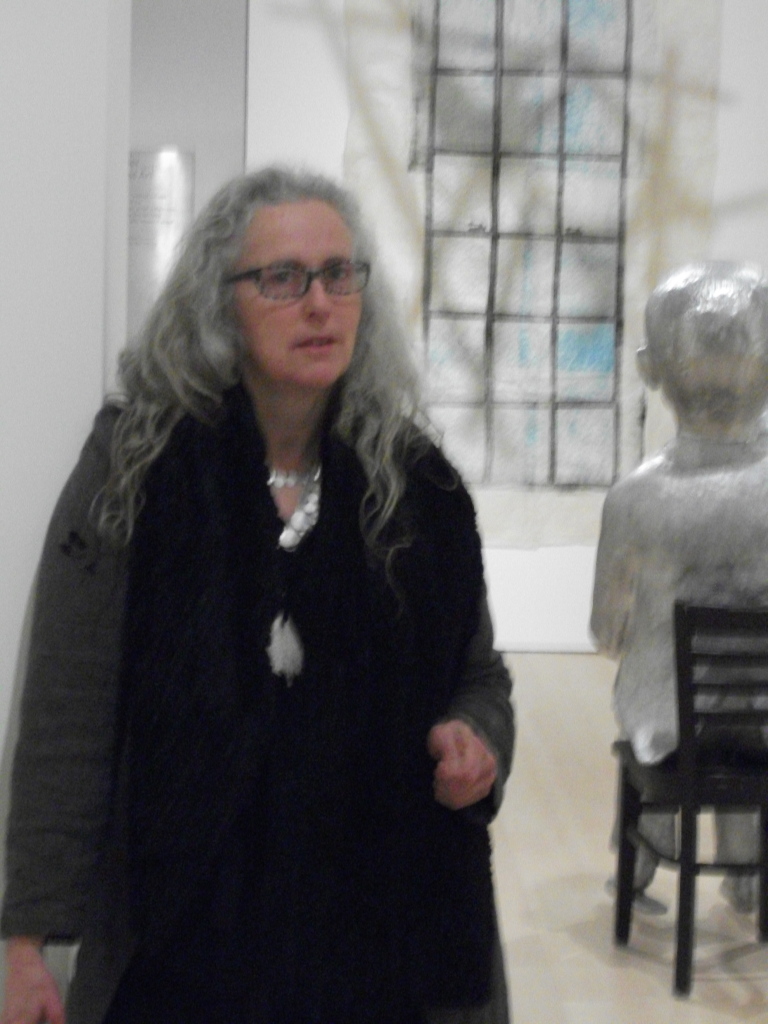 ArtObserved in conversation with Kiki Smith at the opening of “Kiki Smith: Sojourn”, The Brooklyn Museum

This entry was posted on Monday, February 22nd, 2010 at 4:36 pm and is filed under AO On Site. You can follow any responses to this entry through the RSS 2.0 feed. You can leave a response, or trackback from your own site.