Currently on view at the Museum Ludwig in Cologne is Auto-Theatre – the first major European retrospective of Franz West. For this exhibition, West himself grouped over 40 works in themed constellations allowing the visitor to experience the sheer complexity and singularity of his oeuvre. The title Autotheater (Auto-Theatre) points to the performative, interactive dimension of his work and included are the West’s earliest Adaptives (Passstücke) and collages from the 1970s, papier-mâché sculptures, furniture and site-specific installations, his picture walls from the Eighties and his latest sculptures for public spaces.

More text, images, links and video after the jump….

In 1974 West began to develop his famous portable sculptures called Adaptives (Passstücke). In Biology, adaption is a structure or form modified to fit a changing environment and in the 1970s, West attempted to bring this to his art works. The outcome of these experiments were small, portable sculptures called Adaptives (Passstücke) that were only completed as artworks when the viewer picked them up and carried them around, or performed some other action with them. This new, interactive approach left a lasting mark on the younger generations and new tendencies in the nineties, such as “Design Art” and “Relational Aesthetics”. 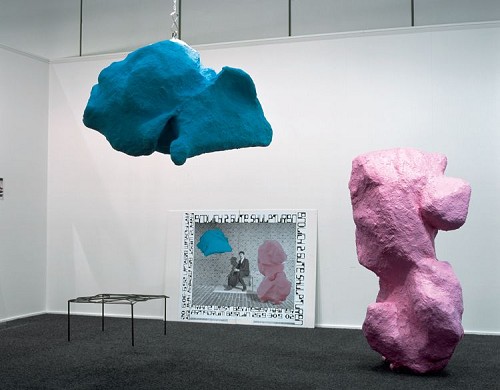 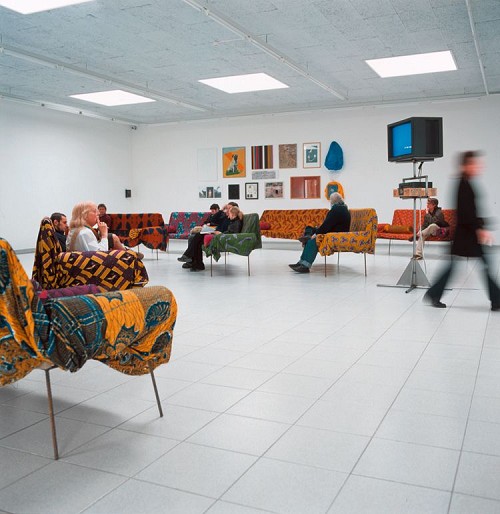 West has also extended this dialogue with the viewer to include his furniture sculptures, which he has produced since the mid-eighties. His colorful and comfortable furniture has transformed exhibition spaces in its invitation to visitors to use it and render the space habitable and sociable. In Ordinary Language, for example, visitors are invited to relax in the comfortable armchairs.

Since the nineties he has worked increasingly with others artists, such as for instance Michelangelo Pistoletto (Spiegel in Kabine mit Passstücken = Mirror in Cubicle with Adaptives) and Heimo Zobernig (Auto Sex). 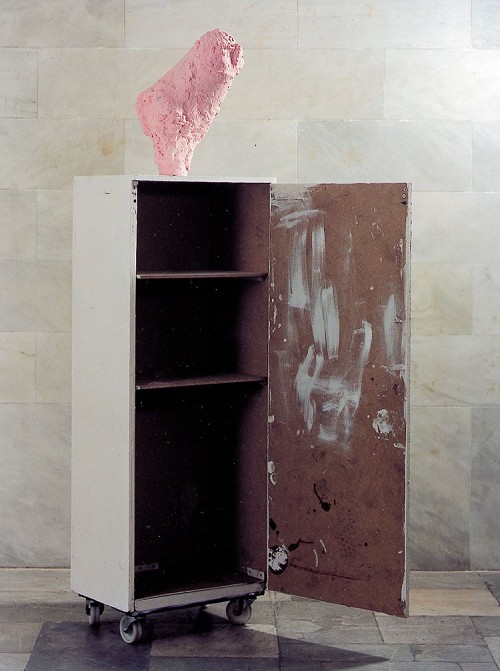 The exhibition will move on in May 2010 to Madre in Naples and in September 2010 to Kunsthaus Graz.

The scene outside the West Side campus housing four schools is repeated throughout Chicago, where fast-food restaurants are clustered within easy walking distance of elementary and high schools, according to a study by Harvard’s School of Public Health. The researchers say the pattern probably exists in urban areas nationwide and is likely contributing to the nation’s obesity epidemic.

“It can be very hard for children and teens to eat in healthy ways when they’re inundated with this,” said lead author Bryn Austin, a researcher at Harvard and Children’s Hospital Boston.

Previous studies have shown that on a typical day, almost one-third of U.S. youngsters eat fast food, and that when they do, they consume more calories, fats and sugars and fewer fruits and vegetables than on days when they don’t eat fast food, the researchers said.

The findings beg the question of whether fast-food purveyors intentionally locate their restaurants near schools to make them easily accessible to young people, some of their key customers, Austin said. site fast food restaurants

“We know that a great deal of thought and planning goes into fast-food restaurant site location,” and that children and teens “are very important to the market,” Austin said.

McDonald’s Corp. spokesman Walt Riker said the fast-food giant locates its restaurants “in high traffic areas like every other business, to serve customers. It has nothing to do with schools.” He called the study assumptions speculative since the researchers didn’t assess whether proximity of fast food affected students’ eating habits.

The study was released Tuesday in the September issue of the American Journal of Public Health.

The researchers compiled 2002 data on 613 fast food restaurants and 1,292 public and private schools in Chicago. Sources included Technomic Inc., a food industry market research company that publishes a list of leading fast-food chains. Restaurants and schools for which addresses could not be found were excluded, but the researchers said the report includes at least 90 percent of both.

An estimated 16 percent or more than 9 million U.S. children aged 6 to 19 are seriously overweight or obese, numbers that have tripled since 1980.

Children in Chicago are more than twice as likely to be overweight when they enter kindergarten than children elsewhere, so the study is especially troubling, said Dr. Matt Longjohn, executive director of the Consortium to Lower Obesity in Chicago Children.

Chicago’s public schools are among districts that have eliminated junk-food and soft drinks from campus vending machines in an effort to tackle the problem, but the researchers said the clustering of fast-food restaurants near schools may be undermining those efforts.

“We can’t really tell our students not to go to fast-food restaurants; all we can do is to educate them about what healthy food choices are,” said Mike Vaughn, a spokesman for Chicago’s public schools.

“When you have a generation of parents who were raised on fast foods, they don’t see any problem with that,” Rosenberg said.

This entry was posted on Thursday, March 11th, 2010 at 6:22 pm and is filed under Go See. You can follow any responses to this entry through the RSS 2.0 feed. You can leave a response, or trackback from your own site.