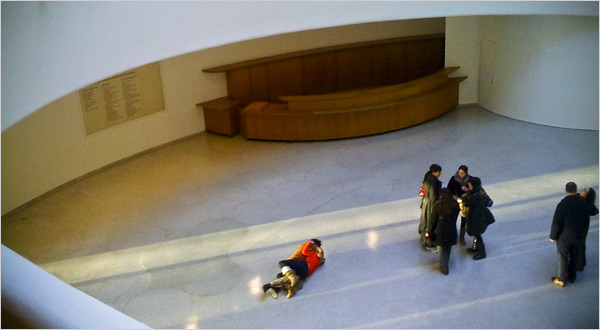 A photo taken with a mobile phone, although picture-taking was prohibited during the exhibition via NY Times

When Tino Sehgal‘s work took over the Guggenheim Museum in New York on January 29th it was a quiet experience. There were no opening parties, no fuss and none of that Art World glitter to make one jump from exuberant excitement.  The walls of Frank Lloyd Wright’s majestic rotunda were stripped bare and seem to have newly acquired a long lost naïveté.  The lobby still brimmed with crowds of people clustered around the impenetrable center. The Kiss unfolded, rolled and scattered itself in a graceful poise of a feline. The subtly choreographed sequence of animated poses referenced erotic works from Rodin, to Courbet, to Jeff Koons. Occasionally, a couple or a small group of visitors would creep closer for a brief encounter or settle in contemplative thought on the floor of the proposed stage. 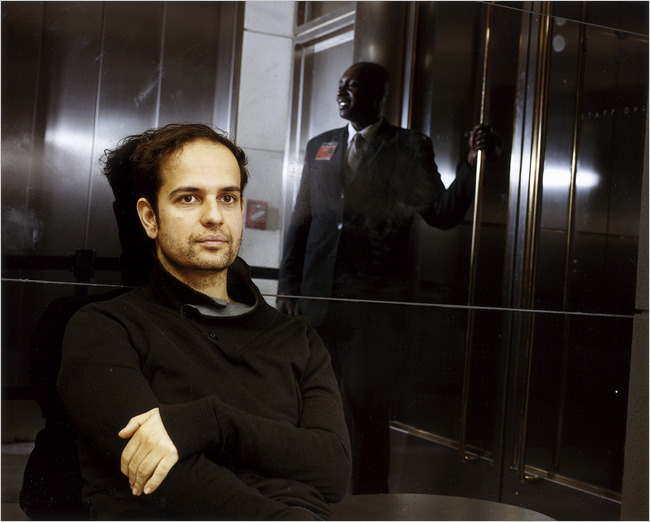 Beyond the softly lit and sensually charged area awaited a vastly different sort of work. It was also alive and moved according to the carefully mediated framework that Tino Sehgal had previously transmitted, but the experience of contemplation, apprehension, and interaction with it was broken into two polarities. This Progress is imbued with the possibilities of being utterly ignored or unexpectedly discovered via experiential and transformative gesture of sequenced conversation and perambulatory ritual.

The “constructed situation” as Tino Sehgal tends to describe this genre of his work, is a series of encounters. You step on the ramp and a child, of about 10 years old, greets you with a frank expression: “This is a piece by Tino Sehgal.” And so the situation begins to propel itself into existence. When beckoned to follow, your curiosity pushes you on. When asked “What is progress?” you are caught unaware and respond in a manner of conversation, expounding and formulating ideas as they come to mind. Further up the ramp, you stumble upon a teenager, whose mission is to continue the existing paraphrased conversation. The child casually departs. Now the situation morphs itself into another framework of transferring ideas, of shifting generational approach, of expounding, questioning oneself, questioning the other – after all talking about progress in itself is a highly speculative task. And thus arrives a middle-aged and, later, older gentleman.  The topics slightly change, so does one’s matter of speaking and before long the constructed journey through time and mind is over. This end is punctuated with a brief and poignant title, which marks the revolution of a thought: “This Progress.” The end is a beginning.

Tino Sehgal’s exhibition introduces a new wave of aesthetic dematerialization of an object, a movement which began in the 1960’s and has reverberated through Performance and Conceptual art, and recently challenged sculptural forms. The artist, who is 34 years young, has become the darling of the art circles and is intent on reevaluating the relationship artists developed with various cultural institutions and the exhibitionality of the work within the public space. Sehgal initially studied political economy at Humboldt University in Berlin before discovering dance practice as a transformative force in his practice. And dance he did, with some of the most experimental French choreographers – Jérôme Bel and Xavier Le Roy. Having worked for some time as a choreographer himself, Sehgal decided to make a transition into art where “the political ideas behind his work would be considered with more gravitas.” Thus the “constructed situations,” whether interactively challenging or kinetically perplexing, provide a fresh and dynamic experience of cultural environment.

While Tino Sehgal may resist the object and the material permanence of consumerist society, he does not by any means protest or avoid the existence of market society. In fact, he is very much a part of it: selling the rights to re-enact his situations under his (or apprentice’s) strict supervision. “The Kiss” on view at the Guggenheim is, in fact, owned by the Museum of Modern Art and is on loan for the duration of no less than 6 weeks (a period specified by Sehgal in the contract). All sale transactions of Sehgal’s work are conducted verbally, in presence of a notary. According to MoMA’s director, Glenn Lowry, the purchase of “The Kiss” “was one of the most elaborate and difficult acquisitions” the museum has ever attempted. No documentation, written or recorded, remains or is otherwise avoided to the best of Sehgal’s ability. Photographs or video recording of the Guggenheim show are also prohibited.

However, Sehgal’s show is one of those that will not need any visual remnants to carry out its impact. It is an experience that will rouse one out of his complacency and re-introduce the space of a museum as an arena for questioning, learning, admiring and discovering. A feeling or a thought no photograph will capture, Sehgal’s interpreters will draw out and release into the world. An afterthought will be yours to situate.

Related links
Tino Sehgal at the Guggenheim Homepage
“How I made an artwork cry” by Jerry Saltz [NY Magazine]
You Can’t Hold It, but You Can Own it [NY Times]
In the Named Museum: Talking, Thinking, Encountering [NY Times]
Making Art Out of an Encounter [T Magazine]
Tino Sehgal [W Magazine]

This entry was posted on Friday, March 5th, 2010 at 4:34 pm and is filed under Go See. You can follow any responses to this entry through the RSS 2.0 feed. You can leave a response, or trackback from your own site.