On show at the Galleria Patricia Armocida, Milan, is the much anticipated “Nos Braços de um Anjo” (In the Arms of an Angel), the second exhibition of works by Brazlian twins Os Gemeos (Otavio and Gustavo Pandolfo). This exhibition presents a series of entirely new, and previously unseen, works that include large canvases, musical sculpture-objects, mechanical and interactive site-specific installations actually created inside the gallery walls.

O Devoto, 2010
More images and text after the jump…

Born out of the Brazilian graffiti scene they have, more recently, gained equal notoriety in the contemporary museum and gallery worlds. After meeting and befriending Barry McGee in Sao Paulo the twins were encouraged to transport their pieces from urban sites onto canvas, as well as producing sculptural, graphic and photographic works. The twins have enjoyed a number of major successes in New York over the past few years, including an exhibition at Deitch Projects, entitled “Too Far Too Close”, in 2008 and most recently the monumental mural on East Houston and Bowery, the wall made famous by Keith Haring’s 1982 mural. 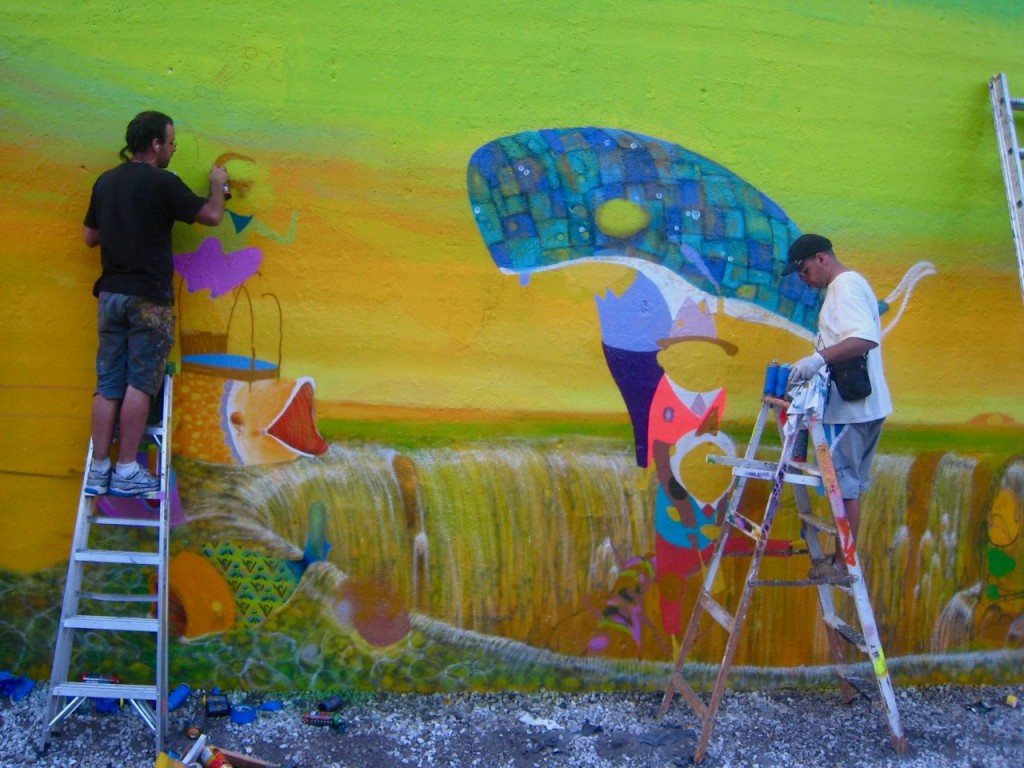 Os Gemeos at work on their mural in at E. Houston and Bowery

Their gallery works retain the much-loved urban zest that one might recognize of Basquiat or Chris Ofili; yet their visual vernacular is specifically of Sao Paulo. Since the 1980s the twins have been intimately involved in the Brazil hip-hop, street scene – embracing break dancers and the like – their love affair with this element of their culture is very apparent in their paintings. Yet, simultaneously the imagery is infused with cultural and musical folklore from the Northeast of the country, which imbues the works with their emotive and magical element.

Their naively constructed characters are ostensibly of the children’s storybook ilk, and have once been described as jaundiced Edward Gorey illustrations [Constance Wyndham, Art in America, 2005]. Their yellowed skin, flat-faces and wide set eyes have become a visual autograph for the twins; it is these figures that are the epicenter of the Os Gemeos universe. This is most evident in this particular exhibition where the figures appear largely to hover in strange landscapes of vivid color and pattern, evoking textile design.

In one corner of the gallery a purpose built bedroom-like interior space that could be the home of the young boy depicted on the wall. Here their very purposefully graphic, two-dimensional figures appear to occupy three-dimensional, real space. Throughout the exhibition the characters alternate between canvas, wall and sculptural form.

Overall the outcome is a lyrical and lively exhibition that is oddly surreal yet also hyper-real. In the artists’ words: “we only report scenes from a magic, love, hate, and real place that live inside us, a real dream, the scene of our own universe, a place called “Tritrez.”

This entry was posted on Tuesday, March 9th, 2010 at 12:39 pm and is filed under Go See. You can follow any responses to this entry through the RSS 2.0 feed. You can leave a response, or trackback from your own site.