January 17th, 2022
REFERENCE LIBRARY
Home » AO On Site – Picasso’s Paris in Philadelphia and New York: “Picasso and the Avant-Garde in Paris” at the Philadelphia Museum of Art through April 25, 2010, and at the Guggenheim “Paris and the avant-garde: Modern Masters from the Guggenheim Collection” through May 12, 2010

AO On Site – Picasso’s Paris in Philadelphia and New York: “Picasso and the Avant-Garde in Paris” at the Philadelphia Museum of Art through April 25, 2010, and at the Guggenheim “Paris and the avant-garde: Modern Masters from the Guggenheim Collection” through May 12, 2010 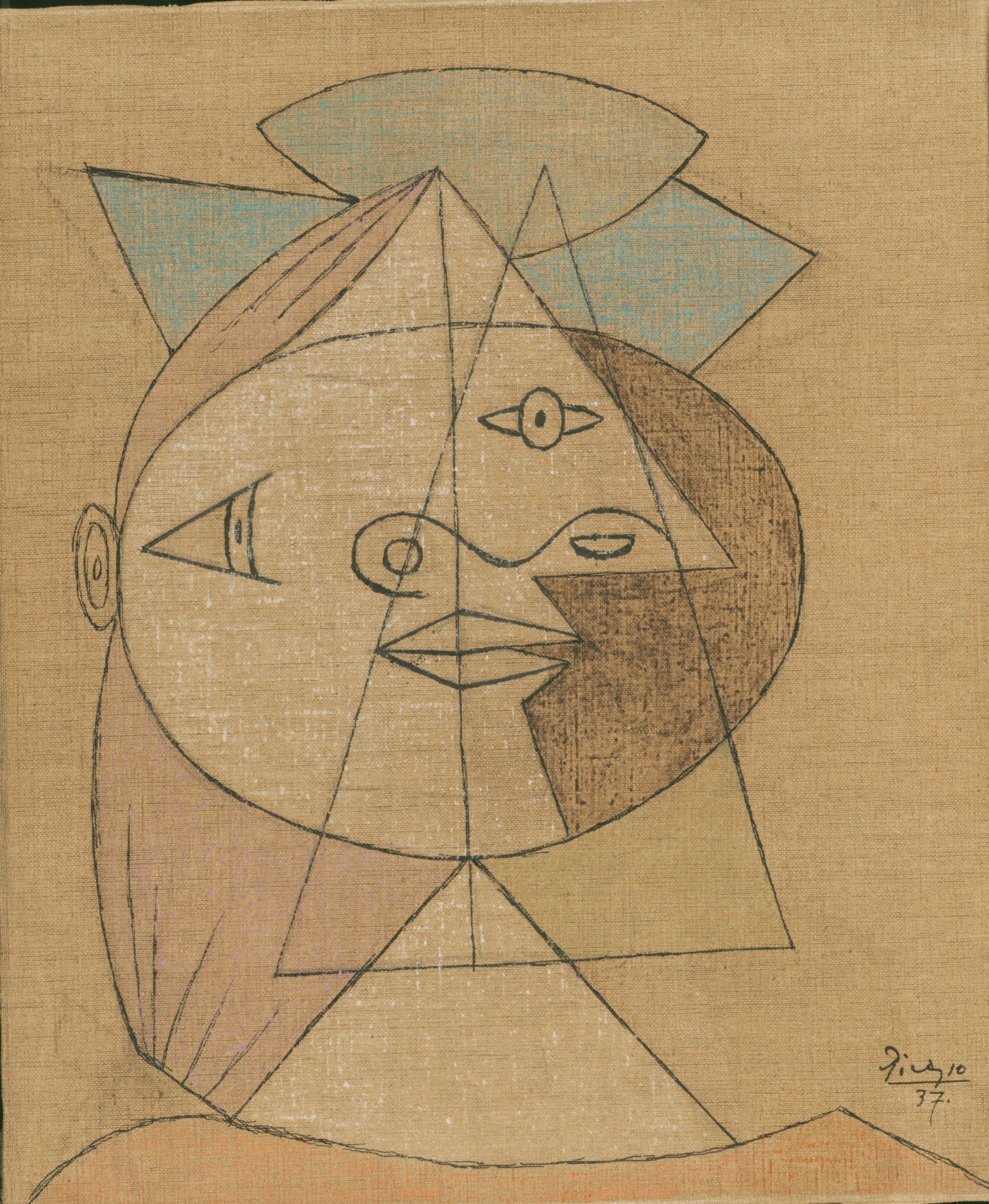 AO visited the Philadelphia Museum of Art and the Solomon R. Guggenheim Museum in New York, which are both showing survey exhibitions of the avant-garde in Paris in the early twentieth century. “Picasso and the Avant-Garde in Paris,” at PMA, is an exhaustive display of thirty years of Picasso, from 1905 to 1945, following him through the development of Cubism and artist communities in Paris. The Guggenheim’s show is smaller and less concentrated on Picasso; it includes thirty works by Picasso, Léger, Chagall, Braque, and more, where the PMA’s 200-strong exhibition includes works by Picasso collaborators and contemporaries as they interact with his own. 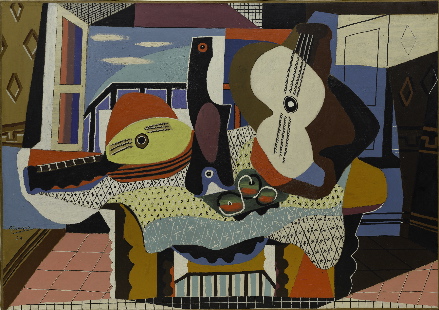 The exhibition at PMA, says its curator Michael Taylor (also the curator of PMA’s recent Duchamp exhibition), is “every curator’s dream to execute.” Drawn almost exclusively from the PMA’s vast repository of Picasso works, the show seeks to celebrate Philadelphia’s love of Picasso, so that Picasso’s famous portrait of Gertrude Stein, a mainstay of the Metropolitan Museum of Art’s collection, does not appear among the mentions. The inclusion of Stein, poetry’s Cubist, figures with this exhibition that follows the movement’s development, as Picasso and others worked to re-order and construct multiple realities/imagings. The show is in sections: the first, beginning with 1904, displays Picasso alongside Georges Braque, his close friend and fellow Cubist; the second further underscores their interchange, with works like Braque’s “Still Life (Violin)” and Picasso’s “Man with a Guitar,” both 1912. Synthetic Cubism, and its spearheads Juan Gris and Fernand Léger, are in the next gallery, which is followed by the most welcoming room in a museum that I have ever had the good fortune to see. This is a recreation of Baudelaire’s salon, in which paintings and sculptures are interspersed, and a giant poof for the patron’s seating pleasure in the center. Included after this are displays on the Americans in Paris and Picasso’s circle, including Stein, F. Scott Fitzgerald, and Josephine Baker. Aside from a brief post-WWI period where Picasso returned from Cubism back to figuration, the show continues to detail Picasso’s and Cubism’s development, through a final, heart-breaking gallery on his art during WWII, that focused on sacrifice, religion, and redemption. 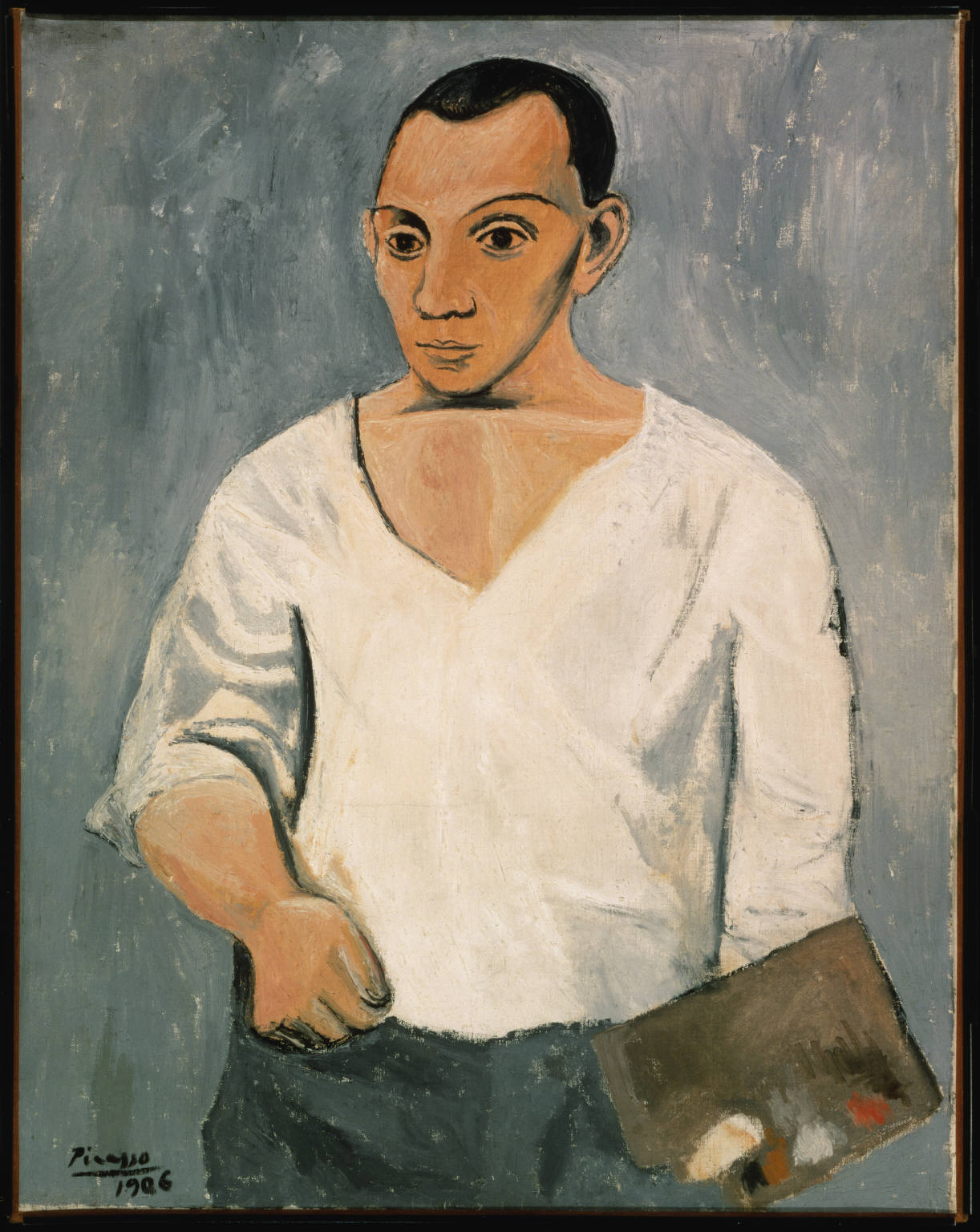 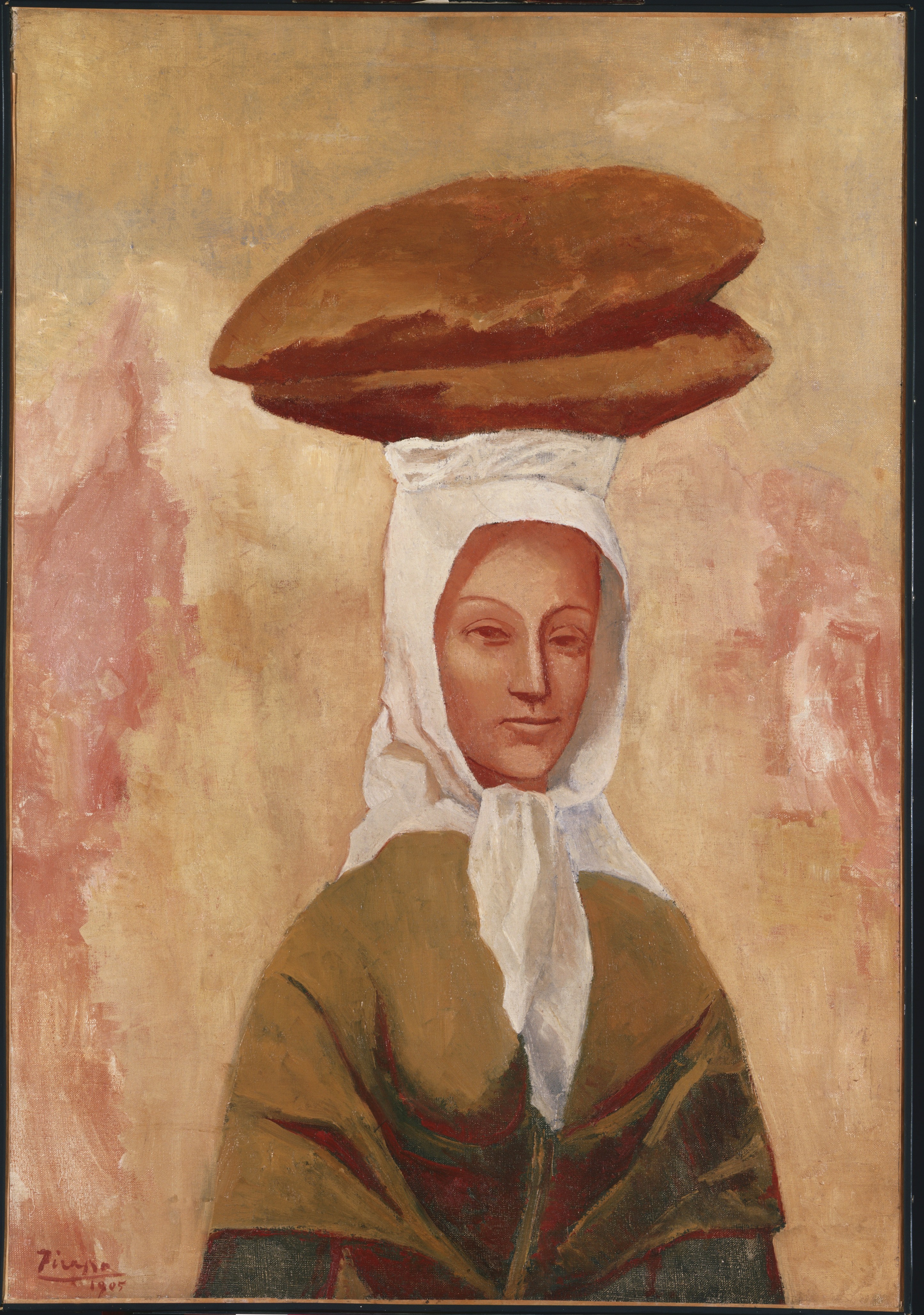 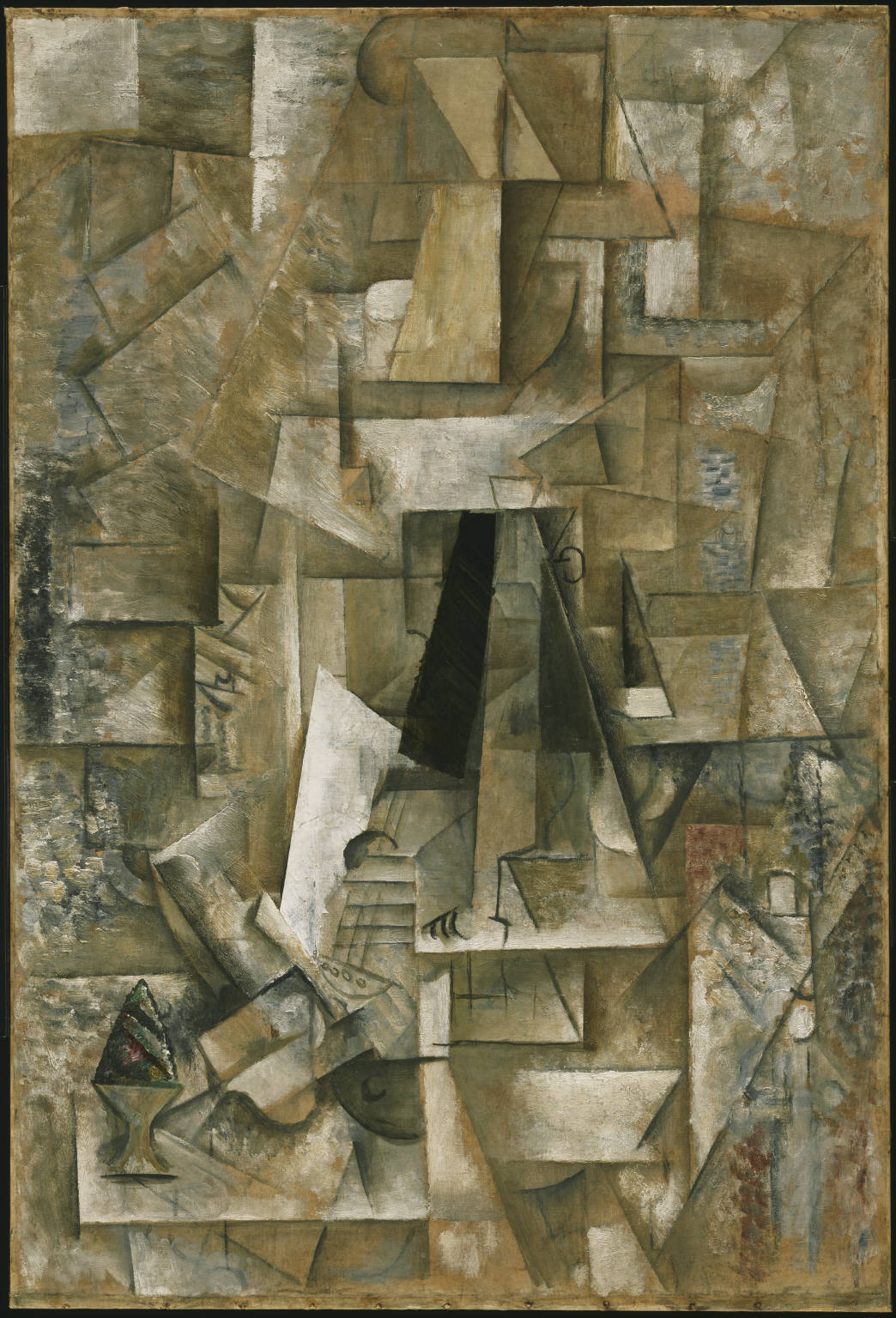 At PMA, “Man with a Guitar” (1912). Pablo Picasso Oil on canvas – Philadelphia Museum of Art, The Louise and Walter Arensberg Collection, 1950. 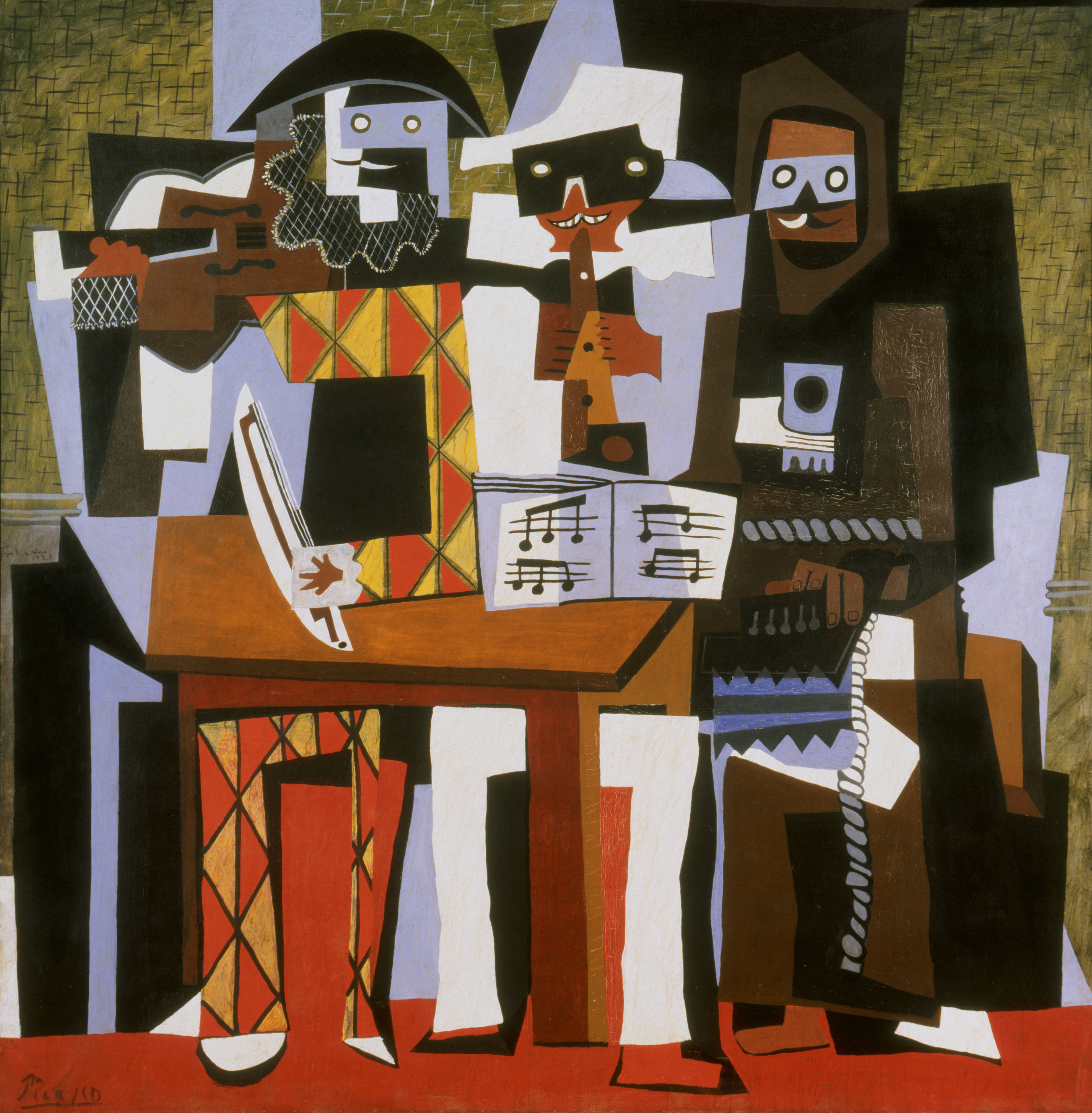 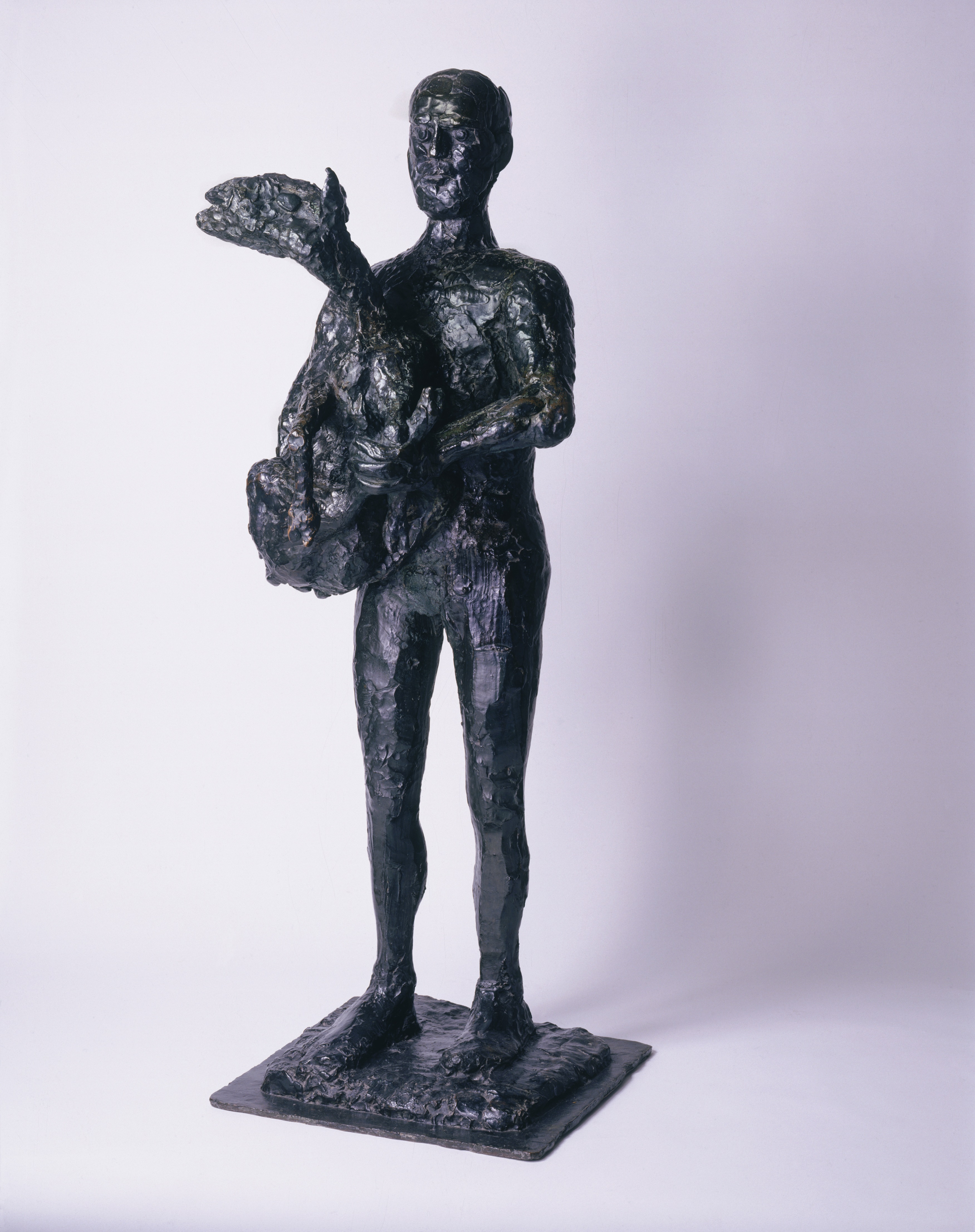 The Guggenheim also celebrates the “School of Paris.” It presents 34 works by 18 artists, including Cubists Picasso and Braque; Cézanne, their predecessor and a major influence on the movement; Surrealists like Fernand Léger and Joan Miró; and even sculptors such as Constantin Brancusi and Alexander Calder.  These and other artists dealt with representation and misapprehension, in dream landscapes and the unconscious, linear forms and flattened planes. 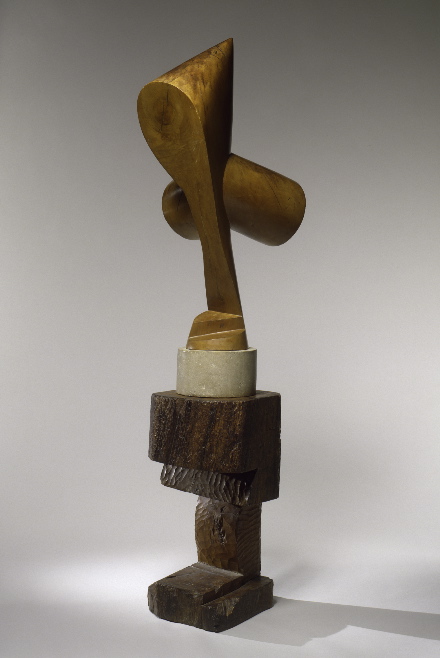 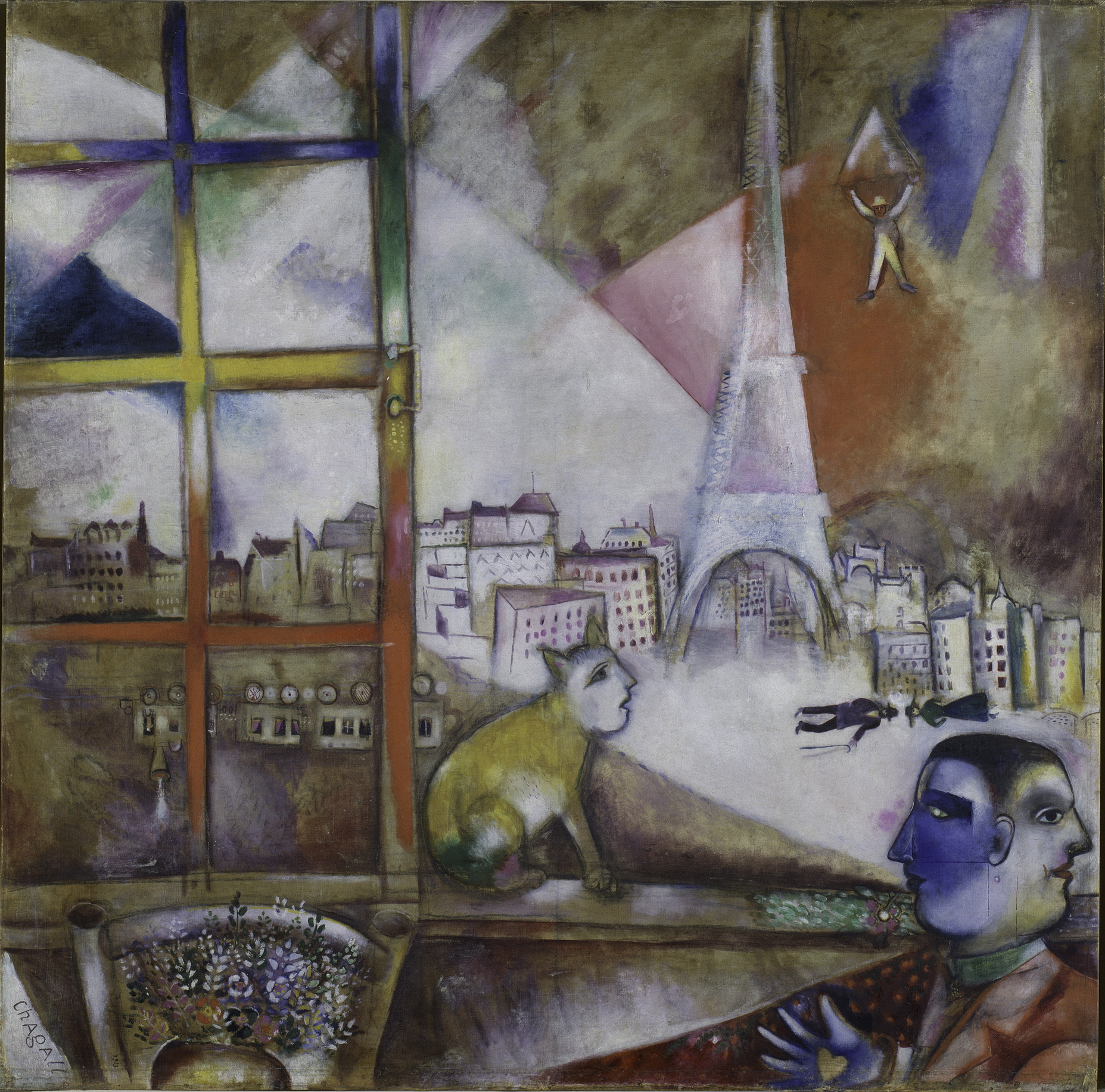 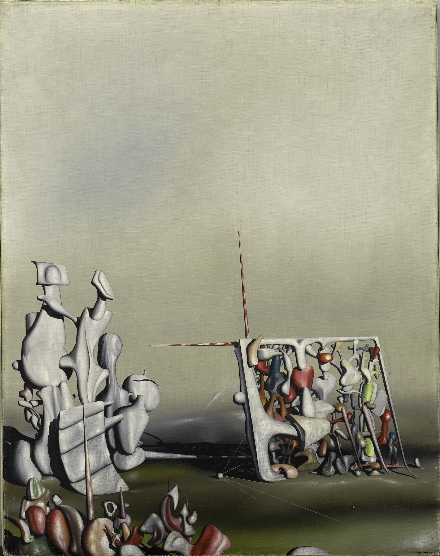 This entry was posted on Saturday, April 10th, 2010 at 6:35 pm and is filed under Go See. You can follow any responses to this entry through the RSS 2.0 feed. You can leave a response, or trackback from your own site.