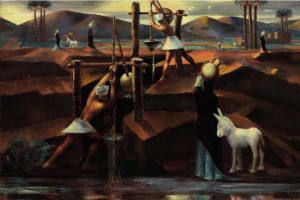 This past Wednesday Dubai’s art connoisseurs gathered together for a sale of Modern and Contemporary Middle Eastern art.  A highlight of the sale were 25 masterpieces from the collection of Dr. Mohamed Said Farsi featuring Egyptian modern painters.  The auction concluded in a total of $15.2 Million outdoing its pre-sale total of $4.3 million.

Les Chadoufs (1934) by Egyptian painter Mahmoud Said was the great sale of the evening bringing in a record $2.42 million, reportedly the most expensive work made by an Arab artist ever to be auctioned at Christie’s Dubai.  The work is from the collection of Dr. Farsi and had a pre-sale estimate of $150,000-$200,000. It depicts a desert landscape with men workers wearing turbans and veiled women carrying jars above their heads envisioning Egypt’s Pharonic and Islamic past. 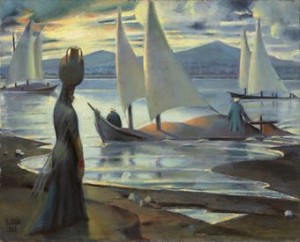 The collection of Dr. Farsi is undoubtedly one of the most important collections of Egyptian modern art.  He collected his work over decades and had a special love for Egypt and spent much time in Alexandria.  He was Mayor of the Sea Port City of Jeddah, Saudi Arabia from 1972 to 1986 and installed many sculptures by internationally acclaimed artists such as Joan Miro and Henry Moore throughout the city. 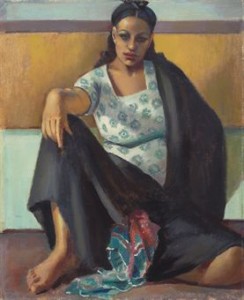 A Girl Sitting on the Floor (1950) by Mahmoud Said, via Christie’s

Christie’s sale of international modern and contemporary art was considered somewhat of a  landmark for the Middle Eastern art market of late.  Such results point to the potential of the region for the international art market even during trying times as well as the quality and artistic refinement of collectors such as Dr. Mohamed Said Farsi. 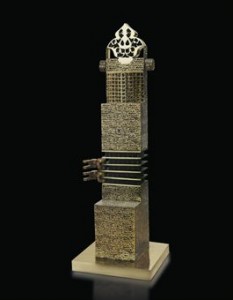 Poet and Cage (2008) by Parviz Tanavoli, via Christie’s

This entry was posted on Thursday, April 29th, 2010 at 5:19 pm and is filed under AO On Site. You can follow any responses to this entry through the RSS 2.0 feed. You can leave a response, or trackback from your own site.