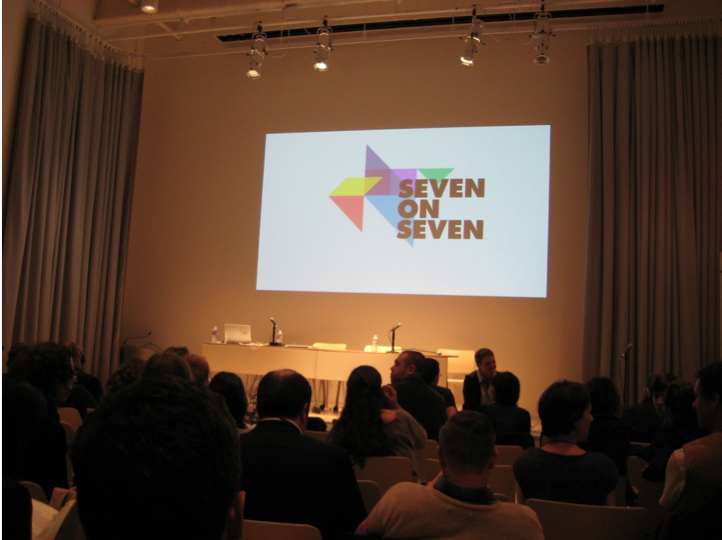 All images and text by Eric Forman for ArtObserved

Last Saturday at the New Museum, new media arts organization Rhizome presented Seven on Seven, a day-long conference showcasing seven collaborations between one artist and one “technologist.”  Each pair had only 24 hours to conceive an idea and whip up a prototype.  The event referenced “9 Evenings,” a famous 1966 collaboration between artists and engineers organized by Robert Rauschenberg and Billy Klüver.  That group had 10 months and came up with many influential technological “firsts.” Seven on Seven had more modest aims, and the results, though uneven, were varied and entertaining, most straddling the line between functional social experiment and pop-up work of art. Rhizome executive director Lauren Cornell curated the pairings and many of the participators gushed about the fun they had brainstorming together.  The audience, a packed house of well-heeled digerati who paid what some said were “exclusionary” amounts for tickets, seemed to enjoy the proceedings, not least the cocktail reception in the New Museum’s sleek Sky Room. Some grumblers asserted that networking was the true raison d’être of the event, although there was widespread admiration for what the participators pulled off in such a short time.

More images, related links and a full report of the proceedings after the jump…. 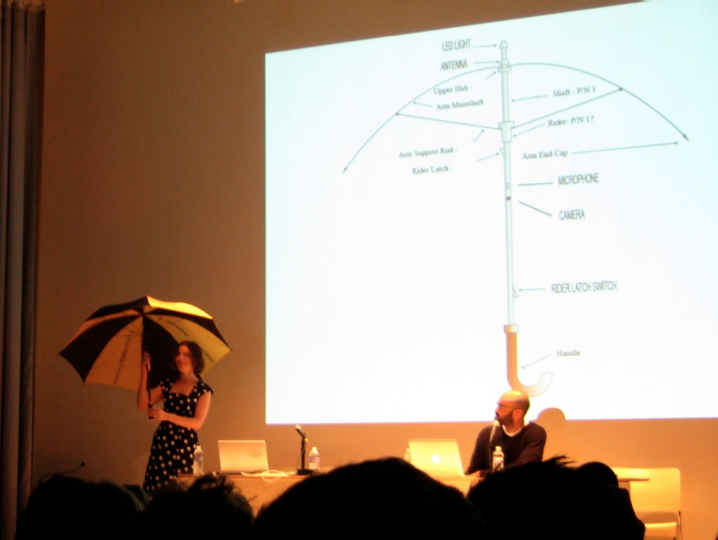 After a short intro by Pete Rojas, the first presenters were Hilary Mason and Marc Andre Robinson. Mason is a computer scientist with a sharp, dry wit and Robinson works with sculpture, drawing, video, and interactive public projects.  Their project aimed to end the disposable model of cheap umbrellas by turning them into tech-enabled community property.  Each umbrella would track location with GPS, record stories and pictures, and be left free for other users like collective bikes in a European city. A mockup site showed how individual umbrellas’ journeys could be documented. Left unsaid was the cost of the tech in each umbrella, the surveillance and privacy concerns, and who would be willing to talk into their umbrella handle while walking alone in the rain. 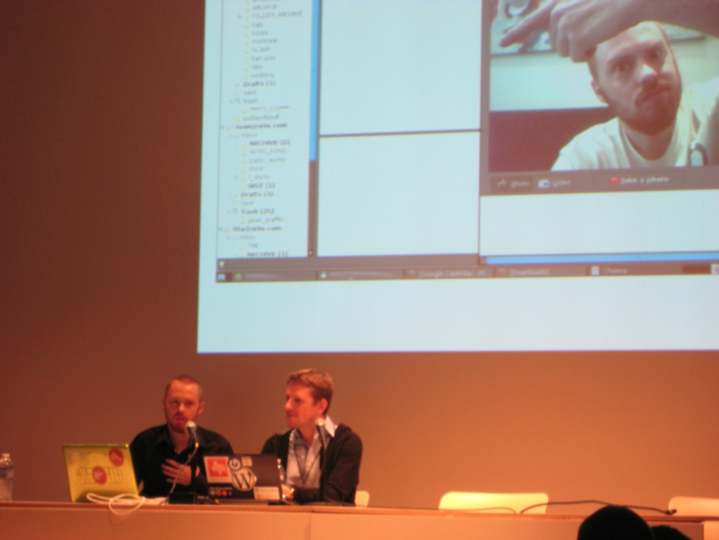 Next, Matt Mullenweg, founding developer of WordPress, and Evan Roth of Graffiti Research Lab fame teamed up to add some warmth to the often solitary act of blogging. One experiment called “Humanized Stats” translated sterile viewer numbers into towns (or cities) with similar populations. A second piece was a new “Surprise Me” feature for WordPress that rewarded blog posters with random celebratory video clips. Here artist Roth got to enjoy the power of putting an art piece in front of an audience of millions overnight. Roth and Mullenweg admitted clips of cheering crowds might not be appropriate for more sober content, and that it could reward quantity over quality, but wanted to give bloggers a congratulatory “slap on the butt.” 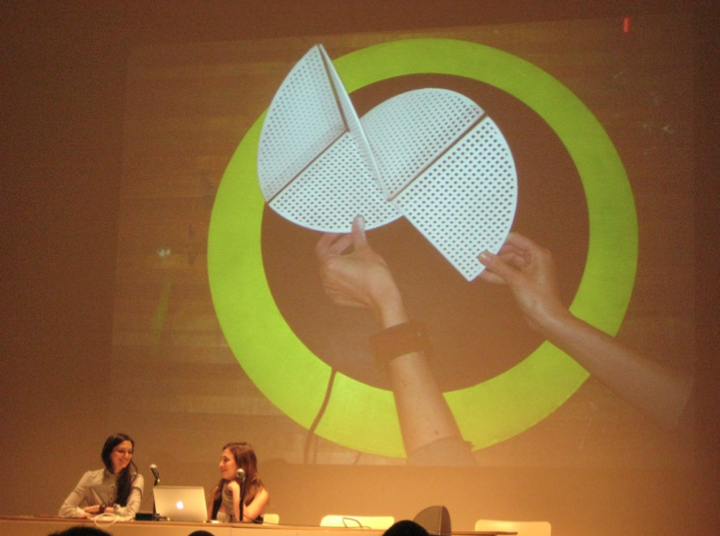 Next up were Tauba Auerbach, an artist inspired by math, physics, and logic, and Aya Bdeir, an engineer, interaction designer, and artist. They created a kinetic sculpture with perforated patterns and motorized joints that randomly folded into different shapes. The goal of their piece, called “Renegade Sculpture,” was to subvert the usual associations with technology and instead embrace mischief, unpredictability, and fluidity. In theory, the sculpture reconfigures itself only when viewers are not present, and changes its geometry, producing moiré patterns from the overlapping perforations. The prototype they showed did not quite live up their musings, but it was beautifully made and did actually move. 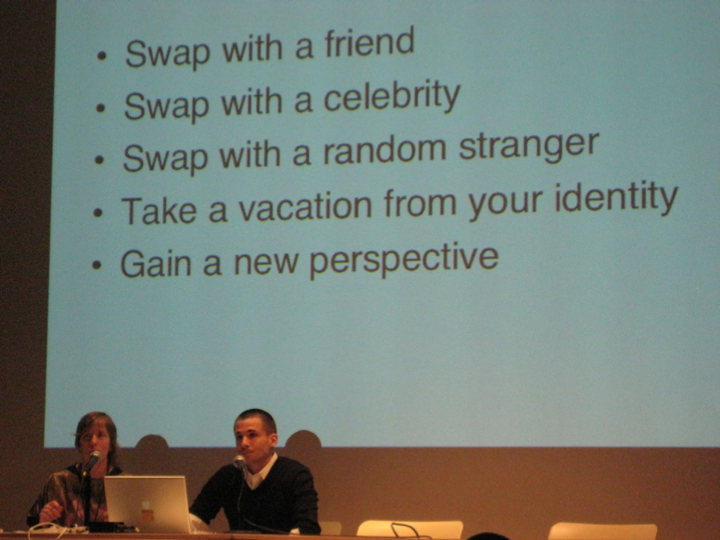 The fourth team was Kristin Lucas, an artist working with the social implications of technology and identity performance, and Andrew Kortina, a web developer with a philosophy background.  They proposed an “Identity Swap” application built for Twitter, a kind of game allowing users to become someone else or give permission to others to become them.  The impersonation would occur only in the form of tweets attempting to sound like the actual person, and subject to auditions and grading from other users who question the authenticity of the voice.  One could use this as a respite from the fatigue with maintaining your own identity, or as a career strategy – for a journalist, say – to impress people with your ubiquity. Lucas and Kortina pointed out the seriousness of the game, as you would be responsible for the tweets of whoever you authorized to “be you.” There could potentially be an economy of impersonation for busy or bored people – although this is already happening with celebrities employing people to “ghost tweet” for them. 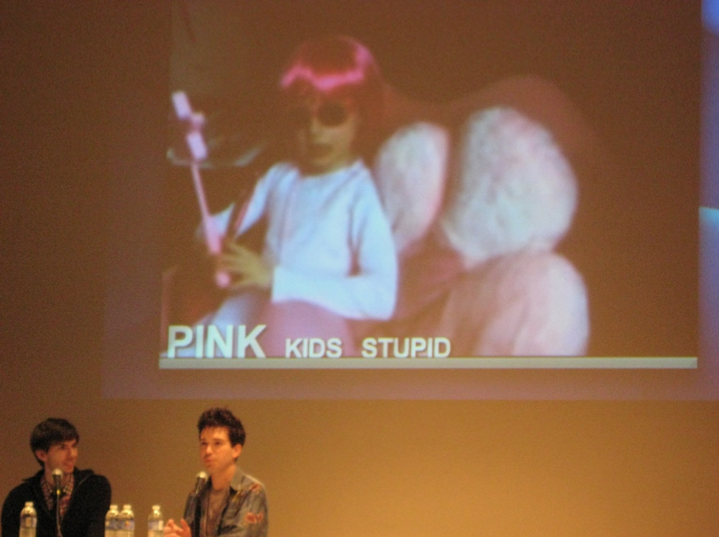 After a short break, the second half of the conference started with video artist Ryan Trecartin and Tumblr founder David Karp. They proposed a public video sharing site called Ten, built for the era of near- random associations and tiny attention spans. 10-second clips show one after the other linked only by content tags, and viewers can jump into the stream or branch off by clicking associated tags. The end result has the random immediacy of chatroulette or its early predecessor PhotoSwap, but despite the artistsʼ intentions, without the realtime intimacy. The endless succession of short video can still be hypnotic, a (buggy) prototype is viewable at www.davidville.com/ten. 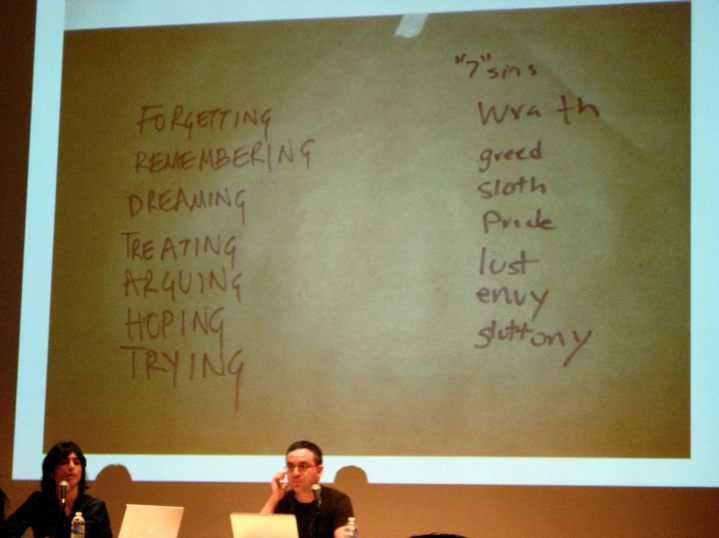 Team 6 was the unlikely pairing of Delicious founder and Google software engineer Joshua Schachter with art-world insider Monica Narula, cofounder of Raqs Media Collective. They presented perhaps the most provocative project of the event, an “Absolution Exchange” offering guilty participators a quantified price for their sins. Narula referred to the last centuryʼs Freudian preoccupation with guilt while Schachter described his use of Amazonʼs Mechanical Turk to determine the absolution economy. Sins were grouped in categories like personal, global, and liminal, and Turk employees were paid pennies to assign a dollar value of charity that would offset the harm done.  Some humor inevitably resulted; the sin of “wondering if there is no point to life” apparently should cost $37. The Catholic Church, of course, implicitly did the same thing with paid indulgences, at least until the 16th century. 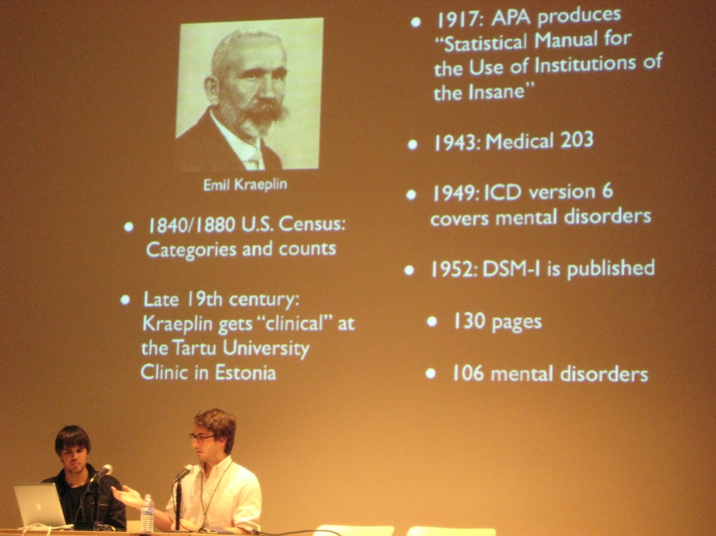 Last up were statistician and entrepreneur Jeff Hammerbacher and data visualization artist Aaron Koblin. Their project was an ambitious reworking of the DSM, the enormous compendium of mental disorders published by the American Psychiatric Association. The scope of such a project was obviously outside of an event like this, but the aims were admirable – revealing the hidden biases in the language of the text, destigmatizing mental illness, and revealing economic motivations behind classifications. Hammerbacher referred to a fascinating 1973 experiment into the validity of psychiatric diagnosis known as “On being sane in insane places,” in which healthy “pseudopatients” were not let out of hospitals for months because staff believed they exhibited real symptoms of mental illness. Despite the depth of the subject matter, artist Koblin did not seem to have had a chance to do much, and the presentation was mostly dense statistics. If ever completed, it could have fascinating results.

This entry was posted on Thursday, April 22nd, 2010 at 1:29 pm and is filed under AO On Site. You can follow any responses to this entry through the RSS 2.0 feed. You can leave a response, or trackback from your own site.