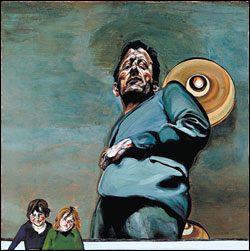 Reflection with Two Children (Self-Portait) (1965) by Lucian Freud, via FT

“I want to paint to work as flesh. As far as I am concerned the paint is the person.” -Lucian Freud

Currently on view at the Centre Pompidou in Paris is a major retrospective of work by Lucian Freud. Now 88 years old, Freud is among one of the world’s greatest living artists. His work was last shown at the Pompidou Centre in 1987 during his last retrospective at the museum. The exhibition presents a great selection of Freud’s work including around fifty large format paintings mostly from private collections together with various prints and drawings as well as photographs from the artist’s studio. The theme of the exhibit is the artist’s studio, the place which is most important to Freud and the creation of his art. 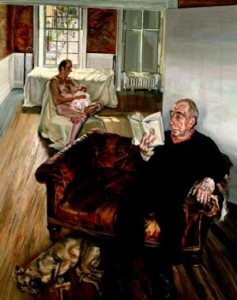 Large Interior, Notting Hill (1965) by Lucian Freud, via The Independent

Freud’s distinct style is due in great part to his constant commitment to the craft of painting. He relentlessly uses paint to depict his self-portraits and nudes almost as if it were an obsession. The end result is an incredible representation of flesh, texture, and character. As the artist states, “I want paint to work as flesh. As far as I am concerned, the paint is the person.” 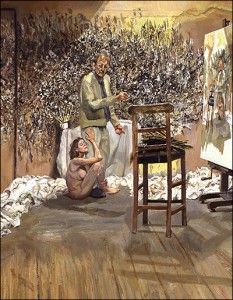 The artist observes his subjects in his studio. He sets his models within  a particular set of displays; he includes objects that surround the space, the furniture, flower pots, and old sofa, and often walls spattered in paint. His studio is his world and the subjects that he brings within it transform it forever on canvas. 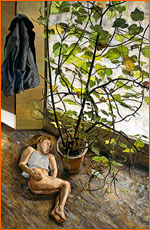 The exhibition includes a few landscapes mostly of London houses, factories, backyards and gardens–views primarily seen from the artist’s studio.

Organized into four sections: Interior/ Exterior, Reflections, Re-readings, and As Flesh, the retrospective at the Pompidou is a comprehensive journey through Freud’s work and practice. The exhibition closes with two films: Tim Meara’s “Small Gestures in Bare Rooms” (2010), a slow and silent view of Freud’s Holland Park Studio, and a five minute film of the artist in his studio by Freud’s assistant David Dawson.

This entry was posted on Sunday, April 25th, 2010 at 1:49 pm and is filed under Go See. You can follow any responses to this entry through the RSS 2.0 feed. You can leave a response, or trackback from your own site.