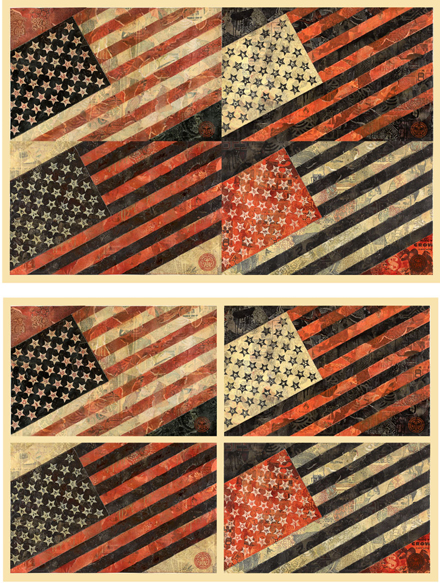 ‘May Day’, the final exhibition before Deitch Projects closes it’s doors, exhibits significant new works by Shepard Fairey executed in his familiar palette of reds, black, and white. The show opens in conjunction with four other mural works by Fairey; a mural covering an 80 foot wall surrounding the Ace Hotel, one on Houston and Bowery, one for the Cooper Square Hotel, and a mural for the Music Hall of Williamsburg.  Both public and private murals, highlight Fairey’s play on constructed binaries–primarily between fine art and design, street art and galleries–as a means of stimulating curiosity about the surrounding visual culture.

Opening Night for May Day, Saturday May 1st at Deitch Projects

The multiple manifestations of Fairey’s works throughout the city over the next month (including a pop-up shop of his clothing line) exposes how viewers are manipulated by stylistic approaches and contexts. The imagery used in his mural on Houston and Bowery and at the Ace Hotel forms a collage of political and social issues such as self-empowerment, activism, and free speech. The stark use of colors and graphic style in combination with areas that mimic the layering of posters that occurs on real billboards, exploits the stylistic approach of advertising, but as an ad for an absent product. The ‘product’ is transferred into a message that makes the viewer aware of public space as a psychological playground for marketing and propaganda, thereby sensitizing us to accumulated visual cues. While Fairey may have his own political message, the work is meant as a way to produce dialogue and thought in the day to day.

Shepard Fairey’s mural at Houston and Bowery in New York 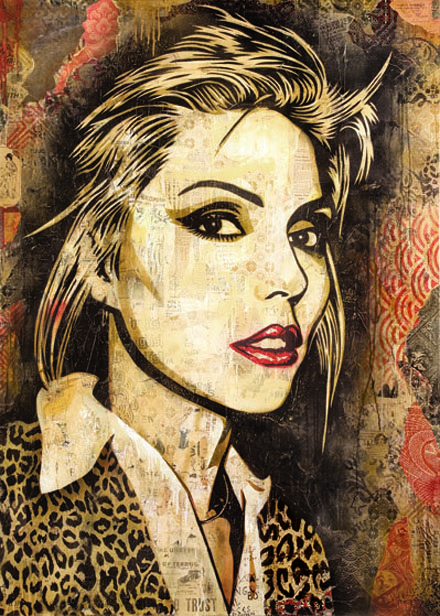 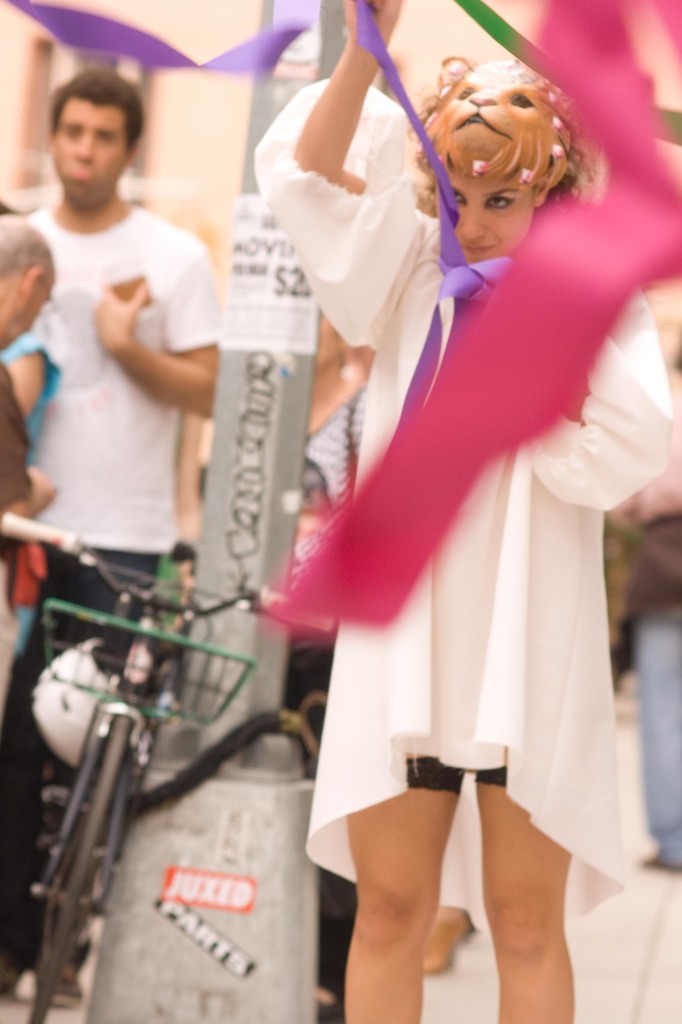 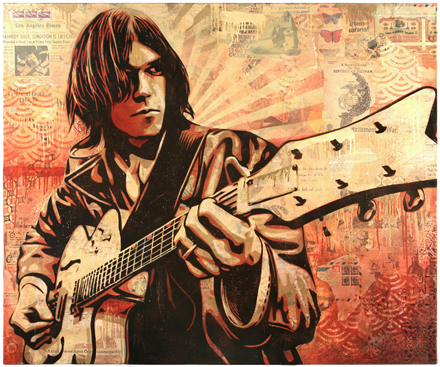 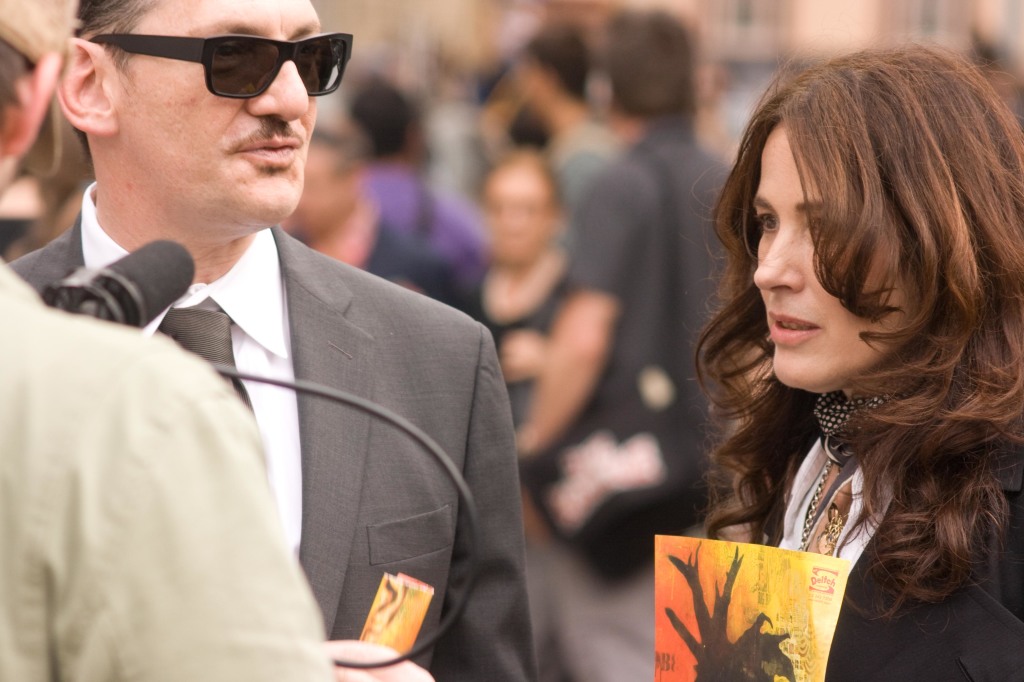 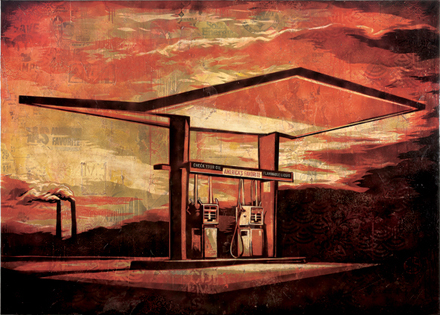 The murals also form a dialogue with the works currently on view at Deitch Projects. Among the paintings are portraits of musicians and artists that Fairey finds to be inspirational, and also more explicitly political works. The paintings have a reciprocal relationship to the murals, and isolate and re-use certain vignettes on the murals on canvas.

For instance, the portrait of Jasper Johns includes his iconic target, and the painting mimics Johns’ use of newspaper in the background. Alongside this portrait is a repeated image of an American flag, which also references Johns’ works, as well as a myriad of political messages. The flag can also be seen in the mural works, thus intertwining the art of Johns with Fairey’s political questions about America, and implicating the art historical dialogue about Johns’ political message (or lack there of). 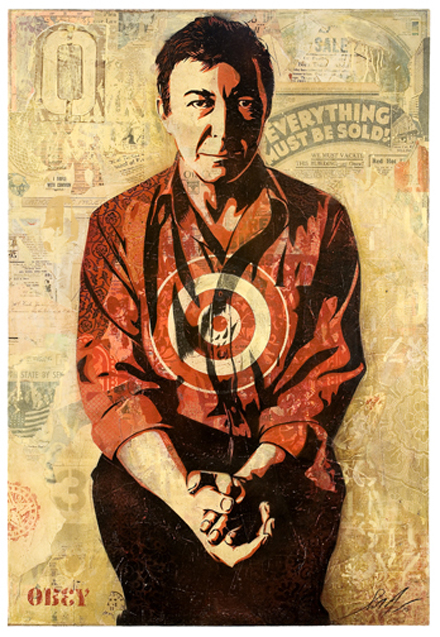 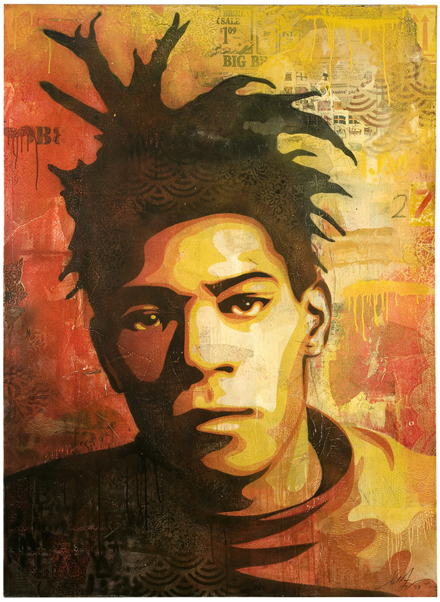 Fairey forms a culture around his artworks that includes the skate punk community, graffiti artists, musicians, art historians, graphic designers, and those who supported Obama in the 2008 election. Fairey mixes the fine art world and the street culture world, and in true street art fashion, even undermines the uniqueness of his paintings at Deitch Projects by selling hand silk-screened copies of the works. 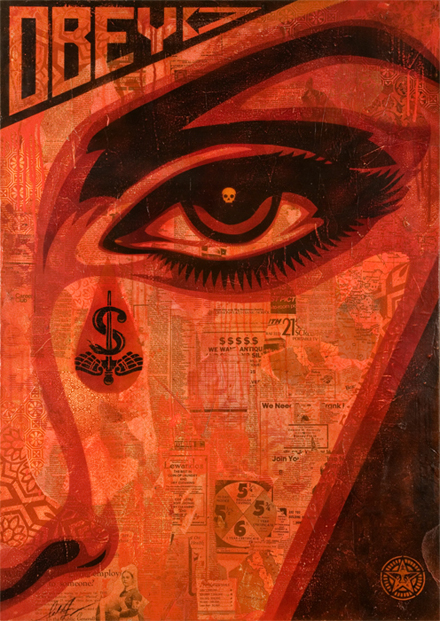 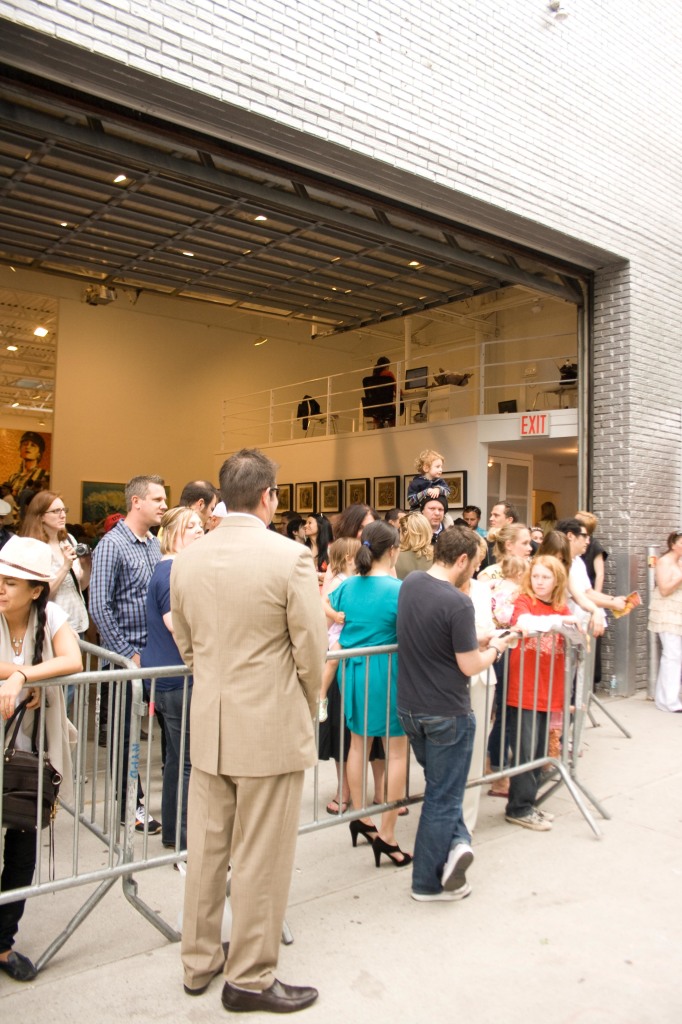 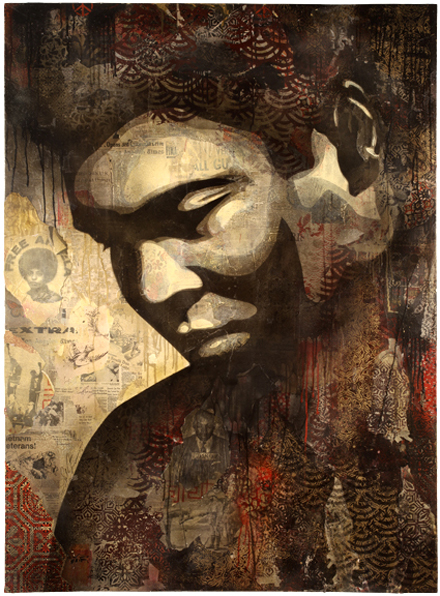 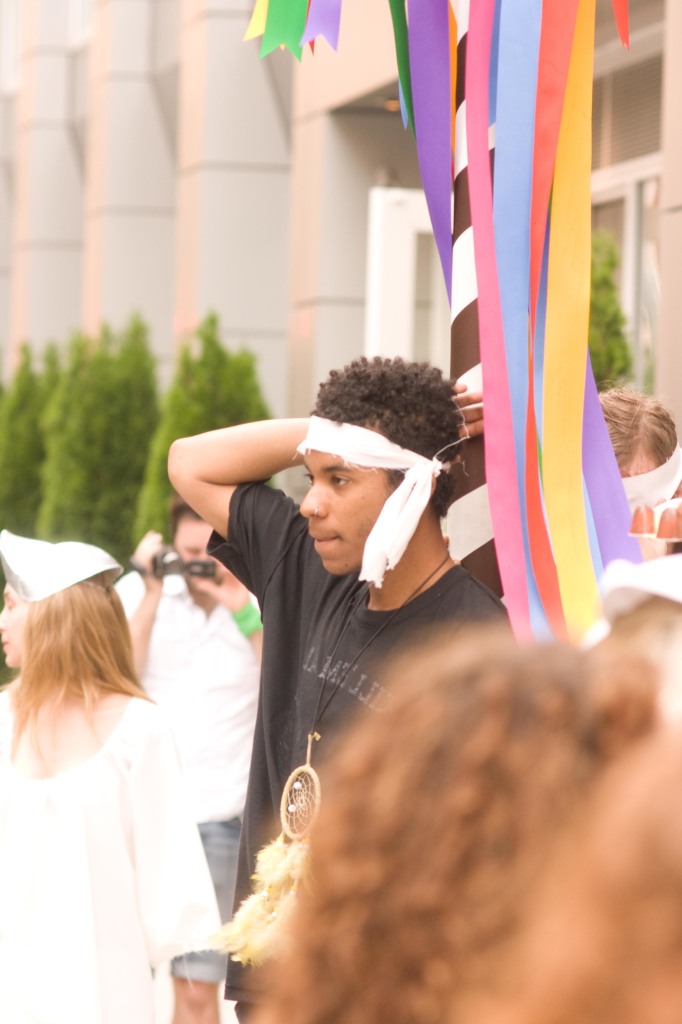 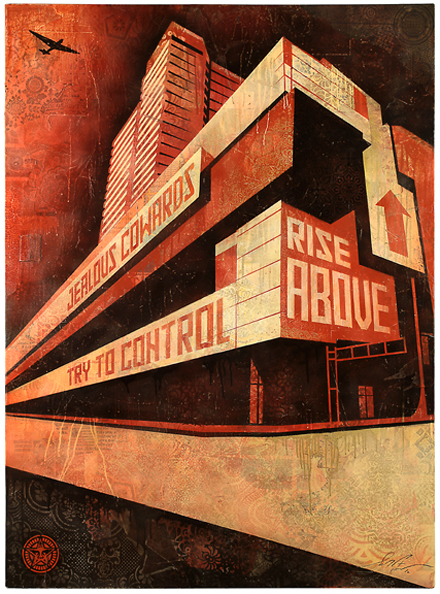 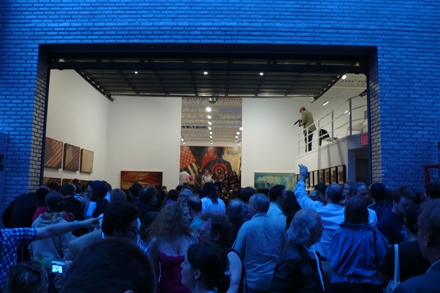 The crowds outside the opening on Saturday night 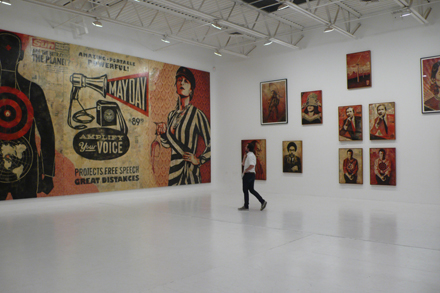 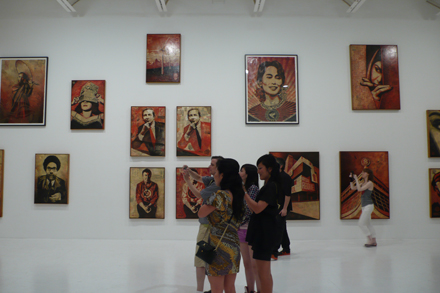 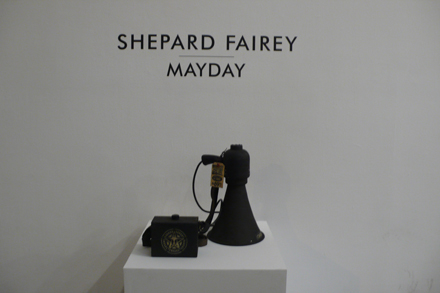 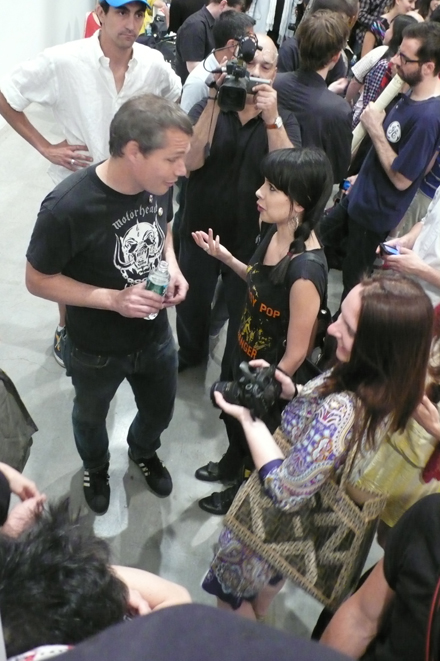 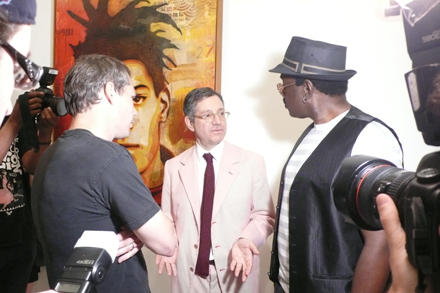 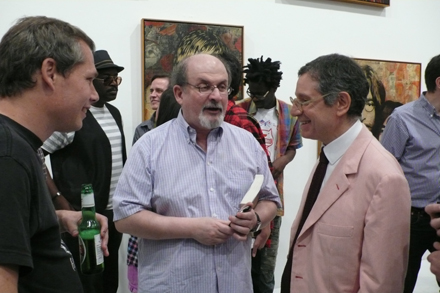 Shepard Fairey, Salman Rushdie, and Jeffrey Deitch at the May Day opening 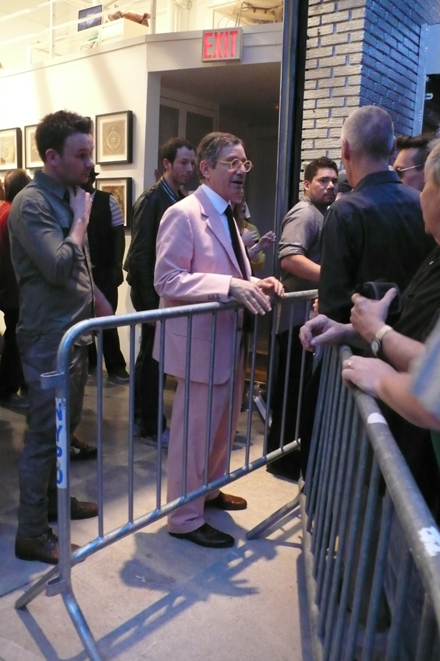 This entry was posted on Monday, May 3rd, 2010 at 1:42 am and is filed under AO On Site. You can follow any responses to this entry through the RSS 2.0 feed. You can leave a response, or trackback from your own site.