The art market received another, enormous boost of confidence last night at Christie’s Impressionist and Modern evening sale, as Picasso’s Nude, Green Leaves and Bust (1932) sold to anonymous telephone bidder for a record-breaking $106,482,500. The staggering price comes hot on the heels of Sotheby’s historic sale of Alberto Giacometti’s iconic bronze, L’Homme Qui Marche I (1961), for $104,327,00 in February this year. The Picasso helped drive the sale’s overall total to $335,548,000, making it the third biggest sale ever witnessed at Christie’s in New York.  Of the 69 lots offered, 56 sold with over 30 lots exceeding $1 million, and of those, 9 exceeded the $10 million mark. Nude, Green Leaves and Bust was part of a 27-lot single-owner sale from the collection of Mrs. Sidney F. Brody, a noted Los Angeles collector.  The Brody group was 100% sold by lot and value and realized $224,177,500 making it the biggest single-owner sale offered at Christie’s New York, surpassing the landmark sale of the Collection of Victor and Sally Ganz sale in 1997, and coming second only to the mammoth Yves Saint Laurent/Pierre Berge sale that made $443 million at Christie’s, Paris in February 2009.

More images, a detailed report and related links after the jump…. 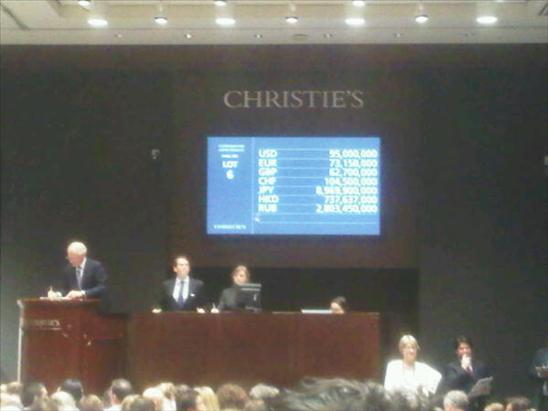 The hammer falls at the $95 million mark after nine minutes of furious contest for Picasso’s Nude, Green Leaves and Bust

Modern sculpture was an important facet of the Brody Collection, and the continuing appeal of Giacometti was made clear by the sale of two bronzes by the artist.  Giacometti’s lean, 1955 lifetime cast Le chat sold for $20,802,500 while Grande tête mince realized $53,282,500 making it the second most expensive Giacometti to sell at auction. La Main, another Giacometti bronze, fetched $25.8 million making it the third most expensive sale of the evening.

The Picasso was not the only work from the Brody collection to achieve a record-breaking price, a world auction record for a work by Braque was achieved with the sale of La treille, a large-format scene of a terrace garden, that sold for $10,162,500, crushing its pre-sale estimate of $3 – 5 million. 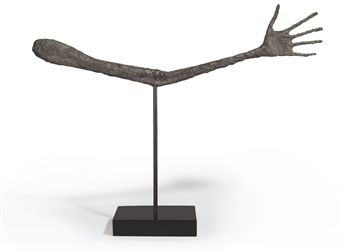 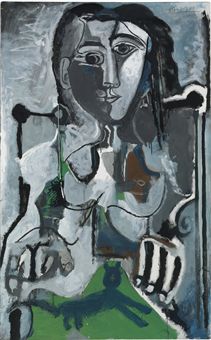 The Various Owners portion of the sale yielded four prices above the $10 million mark for works by Giacometti, Picasso, and Renoir, as well as a new world auction record for Raffaelli.  The rare-to-market Raffaelli, Les buveurs d’absinthe (Les Déclassés), came from the Collection of the late Philadelphia philanthropists Raymond and Miriam Klein.  The work was acquired by The Fine Arts Museum of San Francisco for $2,994,500 against an estimate of $400-600,000.  Two further works by Pablo Picasso sold above expectations as Femme au chat assise dans un fauteuil, 1964, realized $18,002,500 and another work of the same year, Le peintre et son modèle, sold for $10,722,500.

The staggering price and excitement surround the Picasso sale fell in deep contrast to the silence that fell over the room as Edvard Munch’s, Fertility, which had been estimated at $25-35 million, failed to attract a single bid.  The big question remains whether the stellar performance can be repeated this evening as Christie’s arch rival, Sotheby’s, offer more stellar works in their Impressionist and Modern evening sale.

This entry was posted on Wednesday, May 5th, 2010 at 2:35 pm and is filed under AO On Site, Art News, Auction Results. You can follow any responses to this entry through the RSS 2.0 feed. You can leave a response, or trackback from your own site.