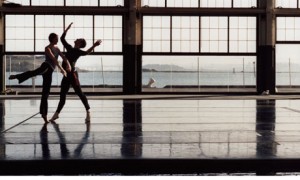 Currently on view at London’s Frith Street Gallery is “Craneway Event” by Tacita Dean, a one hour and forty-eight minute film featuring legendary modern dance choreographer Merce Cunningham (1919-2009) and his dancers rehearsing for an event in a former Ford Assembly plant in Richmond, California. It became Cunningham’s last performance captured on film. He died just a few months later after premiering his last work “Nearly Ninety” on his 90th birthday.

While the dancers move, the light shifts creating shadows on the wall. The viewer catches glimpses of passing birds and ship traffic outside of the facility expressing the daily life  beyond the performance. Such random intervention was often employed by Cunningham and Dean. Cunningham often re-staged these “events” in non-traditional dance spaces such as the Ford Assembly plant or at the Tate Modern’s Turbine Hall in 2003. The music for such an event would often be composed by his long-term partner John Cage and would only be heard by the dancers for the first time on the day of the performance. 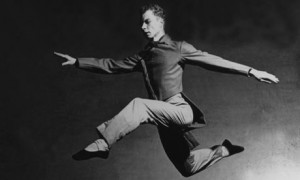 Merce Cunningham Dancing (1949) by Philippe Halsan, via The Guardian

For this last collaboration, Dean decided to film Cunningham’s rehearsal. It was a way for her to better capture the choreographer as well as observe the dance without music. Craneway Event is about Merce Cunningham interacting with his dancers over three afternoons in the studio. Tacita Dean documents the legendary choreographer at work and artistically conveys the importance and allure of this last dance. 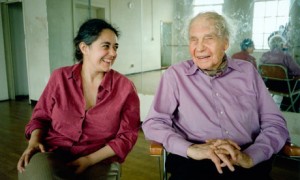 Tacita Dean and Merce Cunningham, via The Guardian

This entry was posted on Saturday, May 15th, 2010 at 4:56 pm and is filed under Uncategorized. You can follow any responses to this entry through the RSS 2.0 feed. You can leave a response, or trackback from your own site.