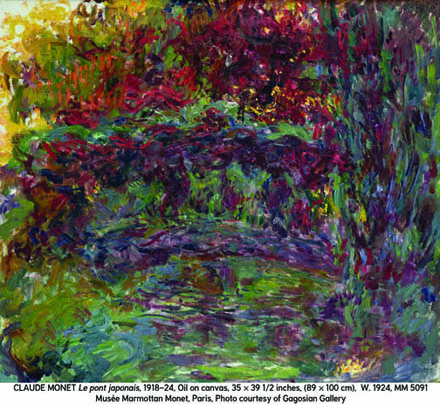 Erase from your mind what you knew about waterlilies. Currently on view at Gagosian Gallery’s location on 522 West 21st Street is Claude Monet: Late Works. Straying from the artist’s better-known pastel-infused palette, the exhibition brings together 27 late canvasses with bold hues and scintillating color combinations. Many of these paintings were never exhibited in the artist’s lifetime, and some remained hidden as recently as the 1950s. Beautifully curated by Monet scholar Paul Hayes Tucker, this exhibition follows in the line of museum-quality shows the Gagosian has mounted in recent years. The gallery’s walls, transformed into elegant lavenders and greys, serve as the perfect backdrop for these exquisitely raw landscapes. 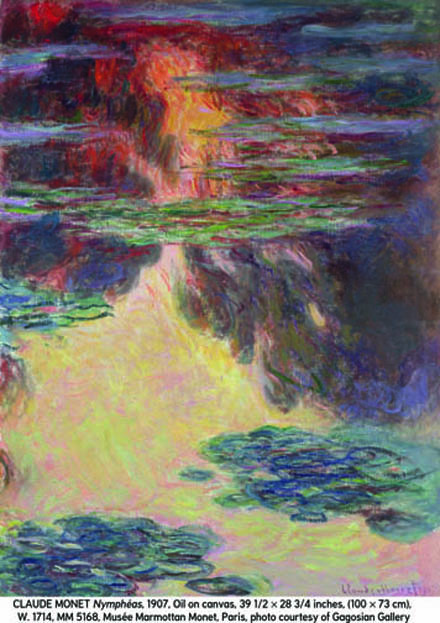 The exhibition begins with waterlilies, or Nympheas, from the first few years of the 1900s. These idyllic bridge and pond scenes from the artist’s garden in Giverny serve as a foil for the shock of the bolder canvasses to come. Peaceful and naturalistic, this is the French master we recognize. These were the pieces first shown in 1909 at the Galerie Durand-Ruel, and they were welcomed with great critical acclaim. We must remember, however, that just a few years after these pieces were created, Impressionism was already outmoded, replaced in fashionable Paris by Fauvism and the beginnings of Cubism. A 1907 canvas, however, brings to light the changes about to come: a vertical Nympheas reveals warmer hues and a tilted perspective that throws our sense of balance off. Turner-esque in its fiery saturation, this canvas is the first to truly evoke the experience of gazing into a reflecting pond in the abstract– almost every color in the spectrum is represented, every possibility of the human imagination present. 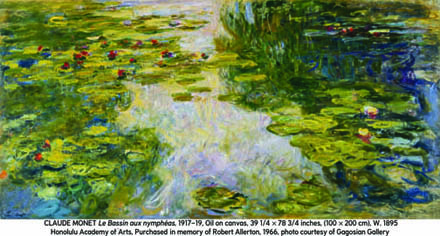 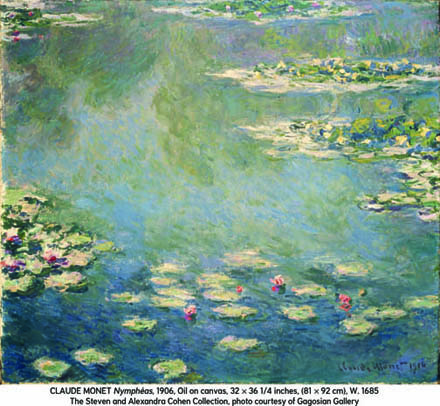 Progressing in time through the galleries, we are confronted with increasingly aggressive paintings which illustrate the rougher side of the artist. Many of the works are unfinished, and some are just suggestions of other works, but they hang alongside the others with vitality, filling in a timeline of Monet’s painterly progression. The Japanese bridge, Le Pont Japonais, and Path Under the Rose Arches (L’allée de rosiers) scenes coexist, drawn together by their buzzing brushstrokes. As critic Lance Esplund writes, “Lines writhe independently, whiplashing color into iridescent haze. Lily pads and vines firmly hold their spatial locations, as they also appear to pulse, to move forward or dart back in space.” In these late works, the subject becomes irrelevant — each painting is a study in the ecstatic rapture Monet felt in his painting. There is no limit to the artist’s color palette; even though the strokes are wild, the pigments are cohesive, and a pond scintillates as easily as a haystack in mid-afternoon sun. Jerry Salz writes, “‘The Water Lilies’ give you a jittery, amorphous sense of a world seen at the speed of light. Monet’s amazing multiple touches—flickering, fast, satiny—make sky and water flip-flop, mist and willows merge; horizon lines and logical perspective vanish; things become unmoored and seem to double and reflect themselves in this proliferating miasma of centerless space.” 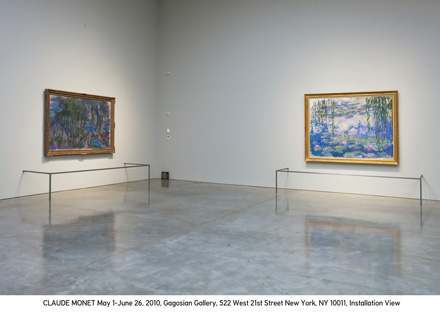 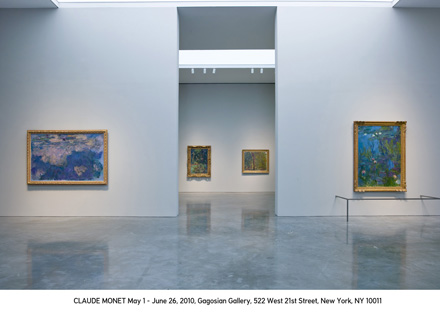 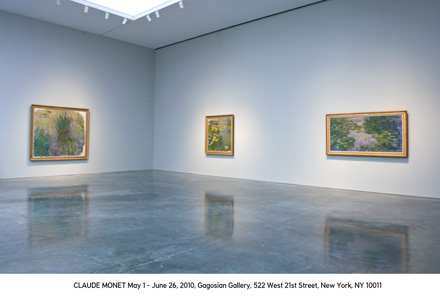 Oscar Claude Monet was born in Paris in 1840. Over the course of his prolific career, he produced more than 2,000 paintings. By end of the 1890s he was well established and hailed as France’s leading landscape painter. In the remaining years of his life, he staged only four exhibitions, all in Paris, each to great critical acclaim.Recent exhibitions of his work include “Monet in the 20th Century,” Museum of Fine Arts, Boston (1998, traveled to the Royal Academy of Arts, London in 1999); “Monet, le cycle des Nymphéas,” Musée de l’Orangerie, Paris (1999); “Claude Monet … Up to Digital Impressionism,” Fondation Beyeler (2002); “Monet’s Garden” and “Monet’s Water Lilies,” Museum of Modern Art, New York (2010). Oscar Claude Monet died at Giverny in 1926 at the age of 86.

An extensive illustrated catalogue accompanies the exhibition. It includes an essay by Paul Hayes Tucker, one of the foremost authorities on Monet and curator of the exhibition, a detailed chronology of Monet’s life and exhibitions written by leading Monet scholar Charles Stuckey, and a compendium of historical reviews compiled by Claire Durand-Ruel Snollaerts.

This exhibition, juxtaposing experimental, aggressive canvasses and poetic, tranquil works, is a testament to the modernity of Monet’s expanded vision. In case you cannot see the show in person, Gagosian has kindly included a walk-through video on their website.

This entry was posted on Thursday, May 20th, 2010 at 1:00 am and is filed under AO On Site, Art News. You can follow any responses to this entry through the RSS 2.0 feed. You can leave a response, or trackback from your own site.