On June 9, at 7 p.m. the inaugural sale of Important Russian Art at Sotheby’s, London kicked off a much anticipated series of Russian- themed sales taking place at Christie’s, Bonhams and MacDougall Auction House – a unique enterprise specializing in Russian art exclusively.  The sale at Sotheby’s brought in £10.4 million ($15 million) , nearly meeting its £11.3 million ($16.3 million) high estimate.

Between 1924 and 1925, the renowned modernist painter  took part in an expedition to the Sahara desert and Equatorial Africa organized by Andre  Citroën (Croisi-24re Noire). His African paintings were a big success and as a result the artist was awarded the Legion of Honor by the French government in 1926.

View of Al-Petri, Crimea by Sergei Vinogradov via Artinfo

An impressive result was achieved by Yuri Annenkov’s 1919 Portrait of Zinovii Grzhebin (below) which sold for £1.8 million ($2.6 million) against the estimate of £1.2 million ($1.7 million). In the catalogue, Sotheby’s declared it “undoubtedly one of the most important works by the artist ever to appear on the international market.” Zinovii Grzhebin (1877—1929) was an eminent editor who played a vital role in the intellectual life of Russia in the early-20th century.

Portrait of Zinovii Grzhebin by Yuri Annenkov, 1919 was sold to an undisclosed buyer from CIS,  via Artinfo

For the Russian Sale at Christie’s that took place on June 8, 2010 at 11 a.m., the venerated auction house offered  an impressive selection of 552 lots, among them Zinaida Serebriakova’s “Reclining Nude” (1930) (illustrated below)with the high estimate of  £ 600,000.

“Russian Man” by Boris Grigoriev (1886 -1939) was painted in 1920 (estimate: £400,000-600,000). This work is part of Grigoriev’s highly acclaimed series “Faces of Russia, represented in collections worldwide, including the State Tretyakov Gallery, the State Russian Museum, the Prague National Gallery and the Philadelphia Museum of Art. “Russian Man”  is a highly emotional tribute tribute to the artist’s homeland and to the Russian people. The lot achieved the price of £657,250 ($947,755). 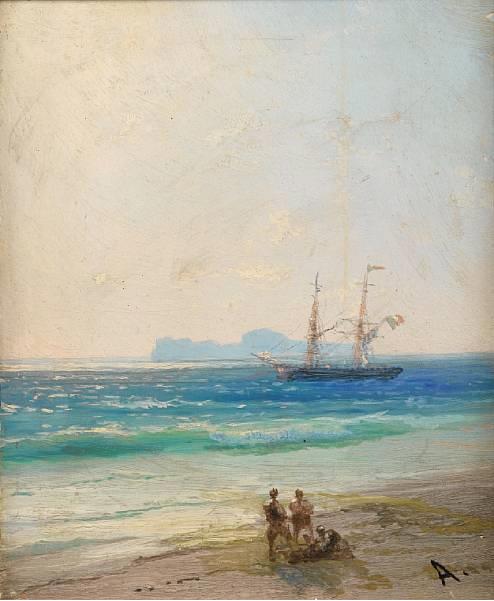 A view of Capri from the Italian mainland, with an Italian brig anchored offshore, a small yet impressive oil on panel, sold for £31,200.

Bonham’s Post-war avant-garde section included an impressive work by the emigre-artist Eric Bulatov “Portrait of Olga Andreeva” ( illustrated below) featured at the cover of the catalogue. The work sold for £150,000.

“The Black Gobi” by Nikolas Roerich via Macdougall Auction

On Thursday, July 10, the auction sale titled Russian Classic and Contemporary Art took place at MacDougall Auction House at 302 Charles II street. The highlights of the sale at this specialized auction house included a stunning tempera by Nikolas Roerich (1874-1947) “The Black Gobi”(illustrated above)  from a renowned U.S. collection, offered with the high estimate of £700,000. The painting sold for  £790,119.

Arsenal Hill at Hight by Niko Pirosmani via MacDougall Auction

The centerpiece of the Pre-war art selection at Macdougall’s this year was an extremely rare works by Georgian artist Niko Pirosmani , stemming from the collection of the French communist poet Louis Aragon, with the high estimate of £1,200,000 pounds. The work sold for  £ 1,075,369, a new record for the artist’s work.

This entry was posted on Saturday, June 12th, 2010 at 2:03 am and is filed under Auction Results. You can follow any responses to this entry through the RSS 2.0 feed. You can leave a response, or trackback from your own site.