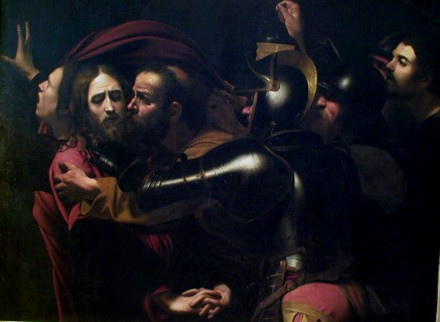 Caravaggio, The Taking of Christ (or, The Kiss of Judas) 1573-1602, which was stolen two years ago and was recovered recently by German and Ukranian authorities. Image courtesy the Odessa Museum of Western and Eastern Art.

German police announced Monday that a painting by Italian Renaissance master Caravaggio, rumored to be worth $100 million, was recovered after being nabbed from a Ukranian museum two years ago. According to the Associated Press, four suspects (three Ukranian nationals and one Russian) were arrested in Berlin as they attempted to sell the painting. Twenty additional suspects were arrested in the Ukraine in connection with the theft.

In July of 2008, thieves entered the Odessa Museum of Western and Eastern Art through a window and, without setting off a single alarm, removed a glass pane that shielded the work. 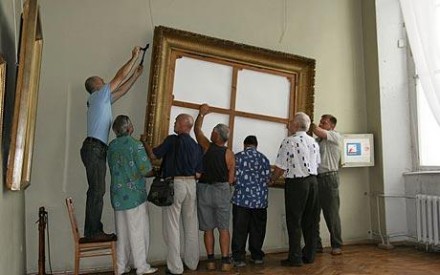 Shortly after it was discovered missing, museum staff remove the frame that originally held the painting. Image courtesy the Telegraph.

There was considerable damage incurred to the recovered painting. Due to the fact that the thieves folded, rather than rolled, the canvas once it was cut from its frame, the work showed wrinkles and lost chips of paint when it was examined by German police Monday.

The source of the work has been in doubt in the past, and experts have come forward to claim that the painting is a contemporary copy of the original 17th century artwork. Its provenance reads as such: it was bought by a Russian ambassador to France, and at the end of the 19th century it was given to Prince Vladmir Alexandrovich. After the Russian Revolution, the painting was given to an art school in Odessa, and then to the museum from which it was stolen in 2008.

Its authenticity was confirmed by Soviet art experts in the 1950s, and it underwent extensive restoration in 2006. A version of the same piece hangs in the National Gallery of Ireland in Dublin, and both were the focus of a 2005 novel by Smith College professor Jonathan Harr entitled The Lost Painting.

The artist, Michelangelo Merisi da Caravaggio, lived a turbulent life. He is known for his intense use of light, which went from light to dark with barely any intermediate value. Art historians coined this term chiaroscuro (Italian for light-dark), and later renamed it Tenebrism (from the Italian tenebrismo, or murky). Trained under Titian, the artist employed close physical observation to create a radical naturalism of figure and form. While Caravaggio never lacked a patron or commission, he was a terrible businessman, and his affairs led him to bankruptcy. Known for his bad temper, the artist killed a young man in a brawl in 1606, fled to Malta, and was dead by 1609. Although notorious when he was alive, his fame soon faded, and his work came back in vogue only in the 20th century. He is now regarded as one of the masters of Western Art.

This entry was posted on Wednesday, June 30th, 2010 at 1:37 pm and is filed under Art News. You can follow any responses to this entry through the RSS 2.0 feed. You can leave a response, or trackback from your own site.