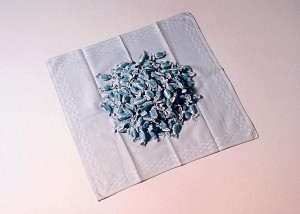 Currently on view at the Fondation Beyeler is “Specific Objects without Specific Form,” part of a traveling retrospective featuring principal works by influential Cuban-American artist Felix Gonzalez-Torres (1957-1996). Among the principal works on display are the artist’s piles of candy and paper stacks. Viewers are allowed to enact with such works by taking away a small part. Also exhibited are a group of lesser known paintings, sculptures, photographic works and public sculptures. 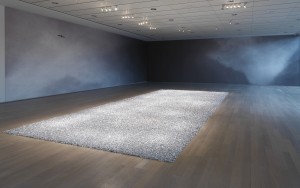 Felix Gonzalez-Torres used everyday objects in order to transform what is commonplace into something which is aesthetically pleasing as well as socially critical. Through his artistic development of the everyday object Torres questions authority, the passage of time, and the fragility of things in his artwork. The present exhibition includes important and rarely seen pieces such as Untitled (Throat) (1991) where a small pile of wrapped candies is found neatly grouped on an opened napkin; the work uses simple everyday objects to convey the great emotions of melancholy and vulnerability. Also displayed is Untitled (Golden) (1995) which is a shimmering curtain of golden beads hung across a gallery filled with references to iconic works by Giacometti and Francis Bacon, yet another way for the artist to examine the movements of the body. 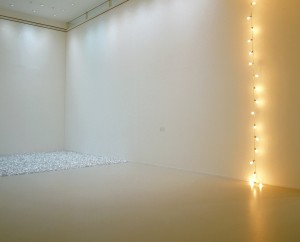 Untitled (Placebo) (1991) by Felix Gonzalez-Torres, via The Art Newspaper

The exhibition layout departs from the traditional retrospective format and includes several exhibition versions in order to emphasize the varieties of Torres’ work. Each exhibition venue, which includes the upper and lower galleries of the Fondation Beyeler as well as outdoor installations, will be open to the public until halfway through the show when it will be re-installed by a different invited artist. At the Fondation Beyeler, the artist will be Carol Bove who will re-exhibit the show from the end of July and onwards. 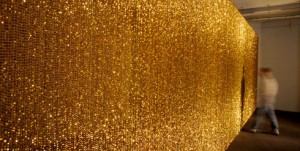 Untitled (Golden) (1995) by Felix Gonzalez-Torres, via The Guggenheim Museum

Felix Gonzalez-Torres was born in Cuba and settled in New York during the late 1970s. There he studied art and began his career before his early death in 1996 due to AIDS. His work is now shown in major galleries and museums throughout the world. 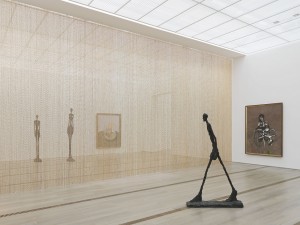 This entry was posted on Thursday, June 24th, 2010 at 1:00 am and is filed under Go See. You can follow any responses to this entry through the RSS 2.0 feed. You can leave a response, or trackback from your own site.