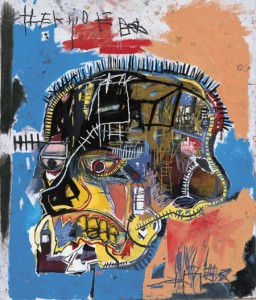 Currently on view at the Fondation Beyeler is a large retrospective devoted to the work of Jean Michel Basquiat (1960-1988)  in celebration of the museum’s fiftieth anniversary. The exhibition bring together over 100 paintings, works on paper, and pieces from renowned museums and collections throughout the world. Basquiat’s works are colorful, playful, incorporating a range of everyday objects, and poetic slogans commenting on contemporary society and social injustice. 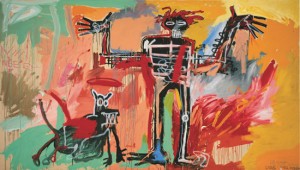 Boy and Dog in a Johnnypump (1982) by Jean-Michel Basquiat, via Fondation Beyeler.

Jean-Michel Basquiat was a graffiti artist, musician, and actor in the New York underground scene until he devoted himself entirely to his painting at the age of 19. Basquiat’s energetic style full of expression and color soon found wide admiration and caught the eye of prominent figures in the art world such as Andy Warhol. With Warhol’s support, Basquiat’s career quickly developed and he became one of the world’s most widely acclaimed artists of his time. 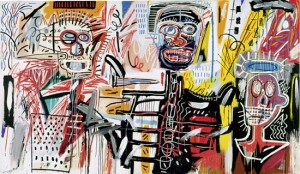 Born to a family of immigrants from the Carribean, Basquiat became the first black artist to achieve stardom. He collaborated with fellow artists such as Francesco Clemente, Keith Haring, and Debbie Harry among others. In just eight years, Basquiat created over 1000 paintings and 2000 drawings before his death at the young age of 27 from a drug overdose. 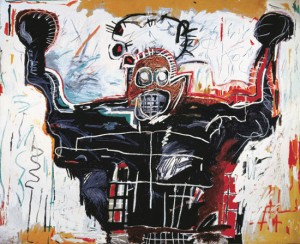 “He had to live up to being a young prodigy, which is a kind of false sainthood,” said Keith Haring, one of Basquiat’s friends and fellow artist collaborators who also rose to fame for his cartoon-like jubilant figures before his pre-mature death due of AIDS at the age of 32. Along with Madonna, with whom he even had a brief affair, Basquiat became a cult figure and symbol to New York City culture in the 1980s. 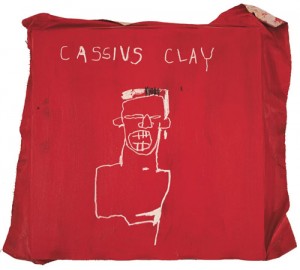 Basquiat’s art absorbed everything around him mixing words, imagery, signs and symbols to create powerful and energetic works of art. The current exhibition at the Fondation Beyeler is one of the largest retrospectives of the artist’s work ever held in a European museum. The works grouped together by period and style reveal Basquiat’s artistic development, expressive energy, and powerful imprint in the history of art. 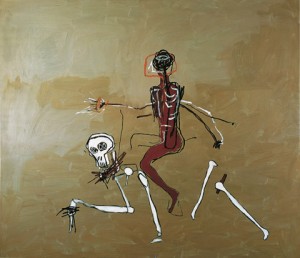 Riding with Death (1988) by Jean Michel Basquiat, via Fondation Beyeler.

This entry was posted on Tuesday, June 15th, 2010 at 1:00 am and is filed under Go See. You can follow any responses to this entry through the RSS 2.0 feed. You can leave a response, or trackback from your own site.