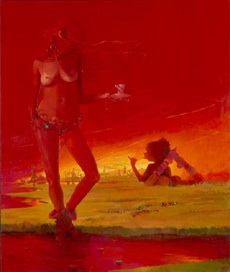 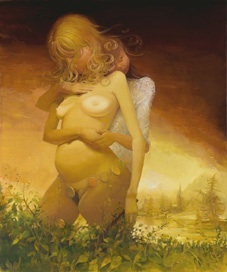 Yuskavage is best known for her intriguing depiction of the female figure. The nude woman is arguably the most popular subject throughout the history of art. Both Renaissance and Contemporary artists inspire Yuskavage, and her work clearly shows that she understands the history of the artistic depiction of the feminine figure. While she uses a traditional and sophisticated method of painting, Yuskavage arrives at an original and playful outcome and a new breed of women.

The paintings in the series being shown at Greengrassi are at first glance eye catching because of Yuskavage’s flawless technique and choice of vibrant colors, but the viewer’s attention is then held by the distorted female figure yielding voluptuous breasts and languid limbs. The women depicted portray a jarring conflation between angelic naivety and hyper sexuality. This divergence establishes both humor and irrationality in Yuskavage’s body of work. 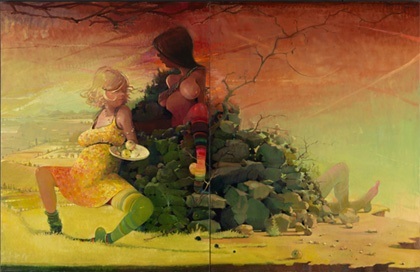 The paintings in this series range significantly in size. The largest work is Wilderness, a three-meter wide diptych, and the two smallest are both twenty-five centimeter square vignettes titled Safety Orange and Ditch. While the size and palette of each work varies, Yuskavage’s static portrayal of ageless illusory women builds a tension throughout the series that reflects the intricate psychological conflicts present in each of the works. The figures’ playful accessories, such as striped knee-high socks and large beaded necklaces, only add to the fantastical ambiance that Yuskavage has created. Caught between the erotic and bizarre, Yuskavage’s paintings bring forth a stimulating fantasyland populated by peculiar women. 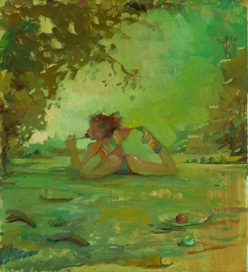 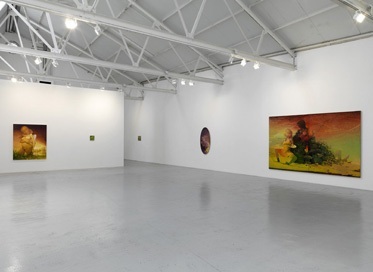 Lisa Yuskavage was born in Philadelphia in 1962. She began to gain wide notice for her work in the late nineties, at which point she was nicknamed the “premier bad girl painter.” Some of her most significant solo exhibitions include a show in 2000 at the Institute of Contemporary Art, University of Pennsylvania and The Galleries Show at The Royal Academy of Arts, London in 2002. Among the group exhibitions that Yuskavage has participated in are The Whitney Biennial (2000), The 46th Biennial Exhibition: Media/Metaphor at The Corcoran (2000), the 5th International Biennial: Disparities and Deformations, Our Grotesque at SITE Santa Fe (2004), and Bad Painting Good Art at the Museum Moderner Kunst Stiftung Ludwig Wien. Her work is part of the permanent collection at The Museum of Modern Art, New York and she is currently represented by Greengrassi Gallery, London and David Zwirner Gallery, New York. Lisa Yuskavage lives and works in New York City.

This entry was posted on Thursday, June 10th, 2010 at 1:00 am and is filed under Go See. You can follow any responses to this entry through the RSS 2.0 feed. You can leave a response, or trackback from your own site.