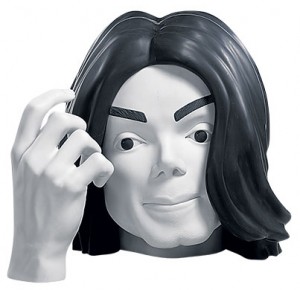 Currently on view at White Cube Hoxton Square is “Allanah, Buck, Catman, Chelsea, Michael, Pamela, and Thomas,” a new body of work by British artist Marc Quinn. The exhibit brings together new sculptures by the artist which depict individuals after having gone through extreme amounts of plastic surgery including hormone therapy, piercings, implants and transplants. The works emphasize Quinn’s continual interest in society’s obsession with the body and how it can be transformed. 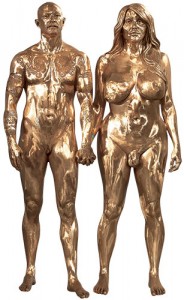 Buck and Allanah (2009) by Marc Quinn via The Guardian.

These bodies go beyond the norm even if they were modeled from real life subjects. They appear to be almost trans-gender and consequently throw the meaning of human physical identity into question. The sculpture of Buck and Allanah is a seemingly recreated version of Adam and Eve yet reconfigured with altered human genitalia. They stride forth as if leading the modern human race into a new cycle of physical transfiguration.

Chelsea Charms (2009) by Marc Quinn, via The Guardian.

Quinn has also created sculptures of celebrities. Pamela Anderson is made of polish bronze with her identical double adjoining her at the shoulder in the same position. There are also two heads of Michael Jackson; one is carved out of white marble and the other out of black marble depicting the Pop star before and after his plastic surgery. The exhibition also features a new series of the artist’s flower paintings as well as two large orchid sculptures in white painted bronze. 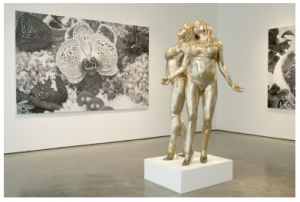 Quinn’s current exhibition is all about the human body, its ability to be reconfigured, and the effects of such bodily change on individual identity. The artist has always been fascinated by bodily mutilation all the way back to when he established himself at Charles Saatchi’s Sensation show with “Self,” a frozen bust of his head made from 10 pints of his own blood. The show engages the viewer with questions pertaining to physical transformation and ultimately, how our body reflects who we are in the public eye.

Marc Quinn (1964) has exhibited his works at major galleries and museums throughout the world.

This entry was posted on Thursday, June 17th, 2010 at 1:00 am and is filed under Go See. You can follow any responses to this entry through the RSS 2.0 feed. You can leave a response, or trackback from your own site.