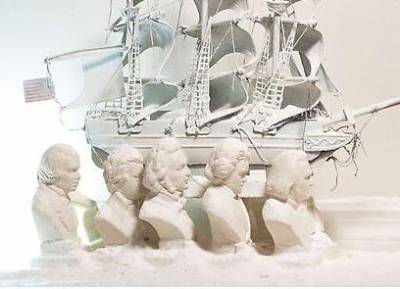 The Story of Edward Holmes (2008) (video still) by Tommy Hartung, via Lehmann Maupin 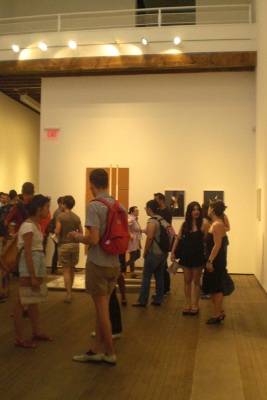 These exhibitions are a group of group shows at galleries of various sizes and varying levels of prominence, which, of course, all but guarantees that the results will be a mixed bag.  That being said, the experience of walking into each of the galleries, be it the luxuriously vaulted heights of Lehmann Maupin or the tiny, stuffy converted storage room that comprises Y Gallery,  was very similar.  In each white space hung or stood works in several media, chattering away to each other, talking at cross purposes, buzzing distractingly.  And in each space one or two works pull you immediately, silently in. 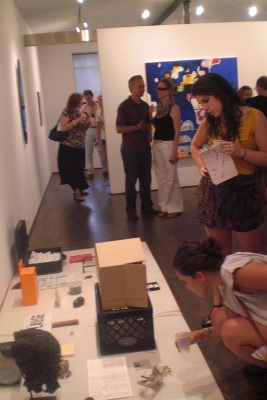 At Sue Scott Gallery, “Chapter One: Whistle,” David Kramer’s (Bar) Unfinished Business (2010) features a hastily thrown-up plywood bar flanked by framed witticisms.  The work ties directly to the experiences of one of the central characters of Lush Life, Eric Cash, who manages the fictional, hip LES bar-restaurant, Berkmann’s, and deftly communicates what all veteran imbibers know: we are never as clever and as attractive as when we are under the influence. 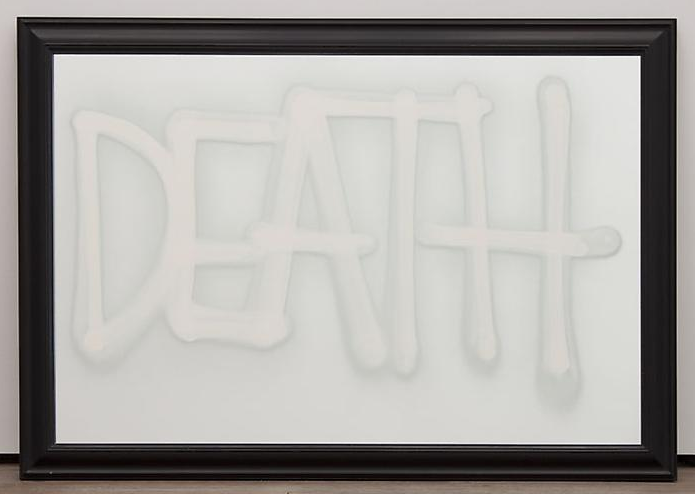 Lehmann Maupin’s exhibition, “Chapter Four: Let it Die,” yielded the best pickings. The most affecting works in the exhibition correspond directly to the pulsing dread and madness that envelop the character of Billy Marcus, who obsessively wanders the LES alternately looking for his dead son and his son’s killers.  Rashid Johnson’s large, framed mirror spray-painted with the word “DEATH” is both a crass declaration and a more subtle suggestion of a momento mori.  Nina Lola Bachhuber’s series of 16 pen and ink drawings of capering, skeleton-headed creatures, Untitled (2009), also recalls Medieval momento mori.  However, Bachhuber’s creatures often cavort too sweetly to serve as a sobering reminder of our mortality.   Amy Logenecker-Brown’s small canvases (10 x 8 inches), Bedroom (2009) and Bathroom (2009), yield maximum horror per square inch: a figure seeming to spontaneously combust in a dingy apartment, an ominous white cloud erupting from a battered toilet stall.  The woozy fright of Bedroom is intensified by the work hung to its right, Dani Leventhal’s deer-blood painting, Untitled (2008), which looks like nothing so much as huge scorch mark. 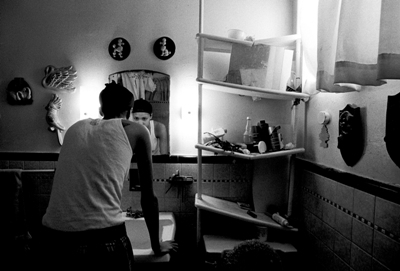 Self Portrait (2010) by Ruby Frazier, via Collette Blanchard

The exhibition at Collette Blanchard, “Chapter Six: The Devil You Know,” comprises mostly photographs.  Angry eyes glower out at us from LaToya Ruby Frazier’s Self-Portrait (2010).  The artist’s sex is indeterminate in the image and the mysterious figure’s placement in such an odd setting—a quirky but certainly outmoded and messy bathroom— combine with the blazing intensity of her body language makes to create a compelling image.  There is no direct relationship to the book in this photograph, but the artist, at least as attired and posed in Self-Portrait, could easily fit in with the wolves that run through the LES. 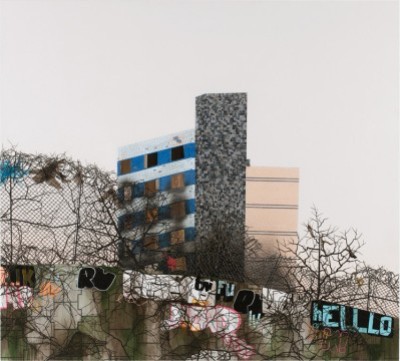 Salon 94 Freeman’s also offers rich rewards in “Chapter Seven: Wolf Tickets.” Like Frazier’s self-portrait, Patrick Lee’s portrait, Deadly Friends (Big Top) (2010), depicts a person or a character that would be at home in the streets.  The image of Big Top simultaneously attracts viewers to him and even through the mediating graphite and paper, puts them on their guard.  Part of Big Top’s appeal is his hyper-intelligent wariness; he would not be so easily caught by the novel’s Quality of Life squad.  Erik Benson’s Overgrowth (2010), is an excellent example of his unique painting style and could easily serve as a stage for the unfolding events in Lush Life.  His images are finely detailed renderings of urban ruin and waste which each feature a specific element that subtly rises off the surface of the canvas through the buildup of millimeter thick layers of paint. 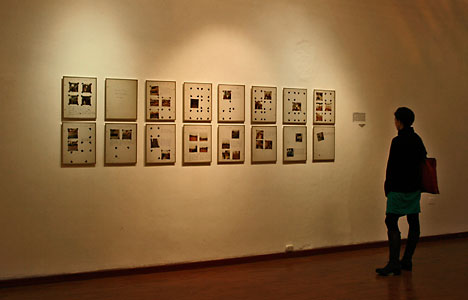 My Pictures from Ecuador (2009) by Karina Skvirsky, via Karinas

Yashua Klos contributed a rather uncharacteristic piece, 6 Page Letter from Silowae (2006), to Scaramouche’s “Chapter Eight: 17 Plus 25 Is 32.”  The printmaker explained that the work consists of correspondence between himself and a friend who was incarcerated. This is not an artwork created as an exploration of prison letters—but is instead the real deal.  The work offers an unvarnished and un-judged voice frequently absent from the safety of the gallery.  The fate of Klos’ friend mirrors that of Lush Life’s shooter.  Karina Aguilera Svirsky’s My Pictures from Ecuador (2009) is also composed of real-life artifacts turned into art: pages from a photo album that document a childhood trip, complete with naïve notations about the troubles plaguing the country.  The work allows the viewer to take the journey with the artist and also opens a dialogue about first-world observers in third world countries.  Unfortunately the piece has no connection to the novel. 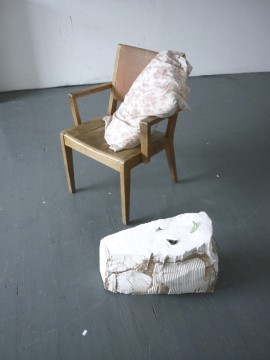 Ultimately, it is hard to find the connection between most of the works in the exhibitions and the novel, which amounts to a wasted opportunity.  However, this lack of narrative cohesion will likely only trouble those thousands of New Yorkers who have read the novel.  On the other hand, as a successful work of cross-pollination, the Lush Life exhibitions are a success.  The opening was well attended, by both art-world grandees and neighbors, and with so many works on display everyone could find something they liked.  Moreover, this kind of team-work benefits the smaller galleries and the less-well-known artists they represent who will gain cache by association.

Price’s character Eric Cash had this to say about his fellow LES artists: “They were the crest of the wave, young gifted, privileged, serious for now about making art…and not only reasonably confident in their ability to do so but also intheir god-given right to do so.”  One can’t help but make that connection between Cash’s jaded description of his compatriots and the cheerful crowds who thronged the exhibitions.  But if Price’s book has one overarching message, it is that the LES cannot go back, cannot rewind the tape to earlier decades.  Today’s LES, a hipster playground studded with galleries and boutiques, can’t be returned to it’s roots as an ethnic enclave.  The beat goes on.  And as all the galleries included in their press releases, “ ‘Lush Life’ will be the present for what will become a living ghost to the future form into which the LES will inevitably morph.” 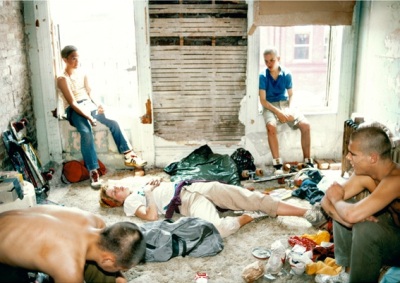 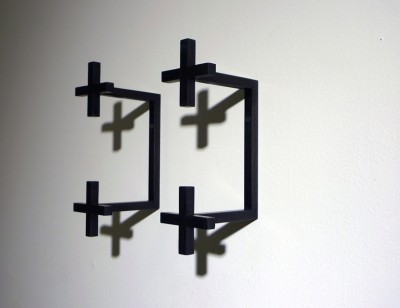 Jurassic Technology (2009) by Oliver Babin and Harold Ancart, via Salon 94 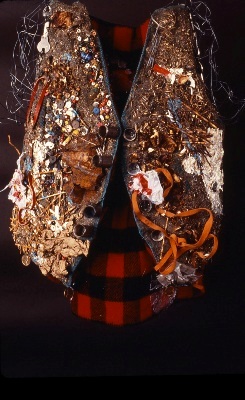 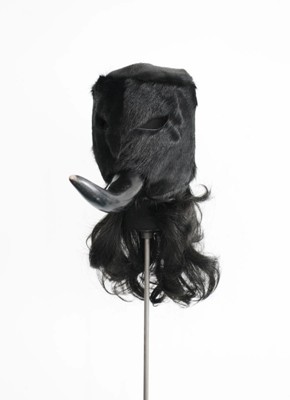 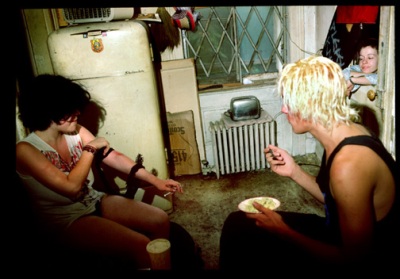 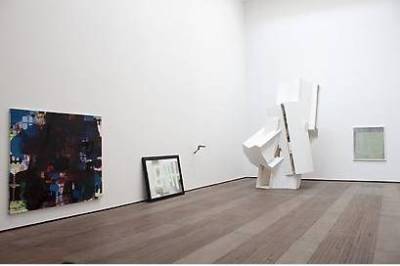 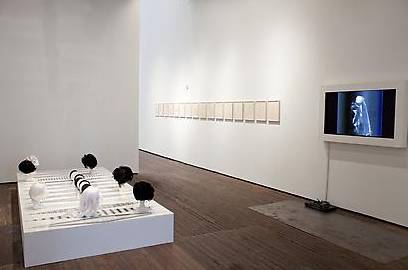 This entry was posted on Wednesday, July 14th, 2010 at 6:26 pm and is filed under AO On Site. You can follow any responses to this entry through the RSS 2.0 feed. You can leave a response, or trackback from your own site.

One Response to “AO On Site: New York: Lush Life Exhibitions on Display at 9 Lower East Side Galleries”