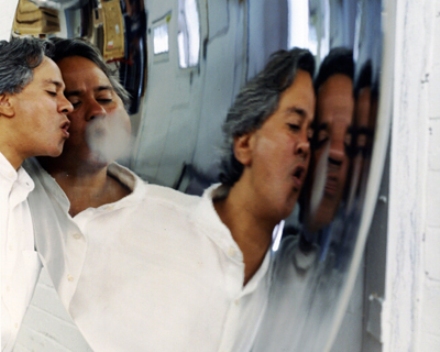 Anish Kapoor with his work, Vertigo (2008), via Guggenheim Bilbao

Currently showing at the Guggenheim Museum Bilbao in Spain is an exhibit of works by Indian sculptor Anish Kapoor. Kapoor is known for his simple, large, monochromatic pieces. His work has been shown internationally and is featured in many large cities around the world. According to the gallery’s website, this show is the first large-scale exhibition of Kapoor’s work shown in Spain. 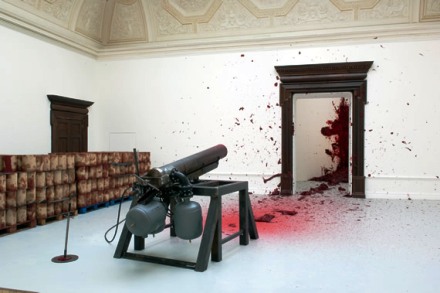 While many of Kapoor’s pieces are large sculptures, the artist has stated that these material features are only inviting the viewer to search for a deeper meaning. Visually, the works appear simplistic, but Kapoor invites the viewers to search for something more complex. This current exhibition focuses on artworks formed without much help from the artist. An example of one of these “auto-generated” pieces is a cannon projecting red wax into onto a white wall, Shooting into the Corner (2008-09), on show at the exhibit. The juxtaposition of the candy-cane colors is particularly striking. 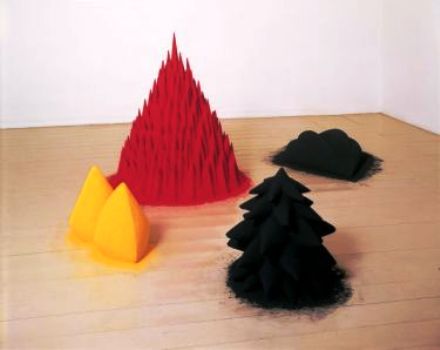 The works on display are not exclusive to Kapoor’s recent pieces. White Sand, Red Millet, Many Flowers was created in 1982 and features four small-scale elements that can be interpreted as being larger. A millet is generally a small seed; the red millet is likely the triangular structure in the center of the work. It is easy to imagine these small shapes as being larger; it’s easy to see the millet as a mountain and the “white sand” as two brightly colored rocks. This is one of Kapoor’s early pigment pieces, which are set next to later sculpture pieces in the exhibit at the Guggenheim.

1000 Names (1982) is yet another early pigment work that uses the color red, which is a significant color for Kapoor. As the curators noted, red is a contradictory color; in one sense, it is violent; in the other, “delicate and fragile.” The spikes in the piece are especially reminiscent of a violent situation, and the piece seems almost intimidating as it supports itself on the wall.

Vertigo (2008) is a stainless steel structure that, when approached, flips the viewer’s image upside down. Its circus effect should both amuse and inspire thought in visitors. The piece plays with the idea of both identification and of perception, distorting both a virtual image and the viewer’s preconceived idea of himself. 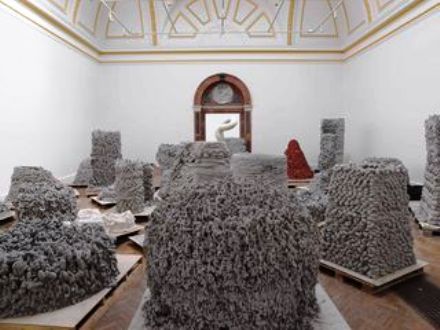 Greyman Cries, Shaman Dies, Billowing Smoke, Beauty Evolved (2008-9) is a piece by Kapoor that looks like many small sculptures clumped together, or, as the museum noted, a ruined city of sorts (Pompeii, perhaps). On the other hand, it almost resembles a child’s tediously made “drip” sand castle at the beach. The exhibition encourages visitors to think about ruins in general and to contemplate their importance to the modern world.

Kapoor’s pieces at the museum range from the complex (Greyman Cries) to the seemingly simple (100 Names, White Sand). However, in all of them, Kapoor strives to make the viewer think about the piece of art beyond its aesthetic implications. The museum’s mission is to highlight Kapoor’s versatility in the field of contemporary art. It is certainly a must-see exhibit for those who know much about the artist, and those who desire a thorough exploration of the artist’s career.

This entry was posted on Thursday, July 29th, 2010 at 1:00 am and is filed under Go See. You can follow any responses to this entry through the RSS 2.0 feed. You can leave a response, or trackback from your own site.

One Response to “Go See – Bilbao: Anish Kapoor at Guggenheim Bilbao through October 12, 2010”