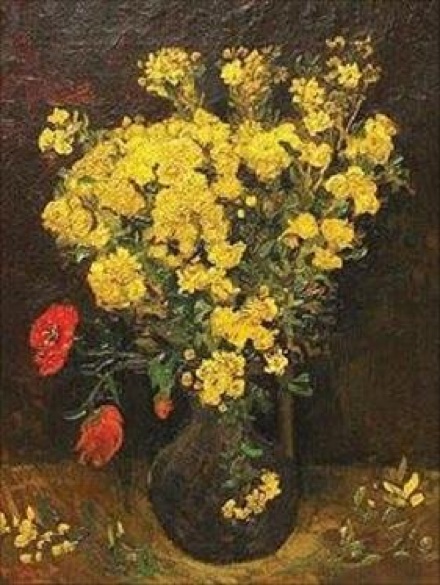 A Van Gogh painting valued at $55 million dollars was cut from its frame and taken from the Mahmoud Khalil Museum in Cairo on Saturday. Despite reports that the painting, referred to as either ‘Poppy Flowers’ or ‘Vase and Flowers,’  had been recovered from an Italian couple at the Cairo airport yesterday, Egyptian officials now confirm that the painting remains missing.

Improper security measures have been cited as a contributing factor to the painting’s theft. According to Egyptian state prosecutor Abdel-Meguid Mahmoud, only seven of the 43 security cameras in place were operational at the time of the incident, and none of the museum’s alarms were enabled. Transit centers throughout the region and Europe are currently on alert, and at least 15 Egyptian officials have been temporarily barred from leaving the country.

This is the second time the painting has been stolen from the Khalil Museum. In 1978, it went missing for two years before resurfacing at an unknown location in Kuwait. Egyptian officials have never released details regarding the identities of the individuals involved in this case, or confirmed whether or not they were tried in court.

The museum is located in the former home of Egyptian collector Mahmoud Khalil, and contains primarily European paintings and sculpture of the 19th century. The institution reportedly has very little traffic, which may partially account for the lax security measures in place.

This entry was posted on Sunday, August 22nd, 2010 at 3:37 pm and is filed under Art News. You can follow any responses to this entry through the RSS 2.0 feed. You can leave a response, or trackback from your own site.