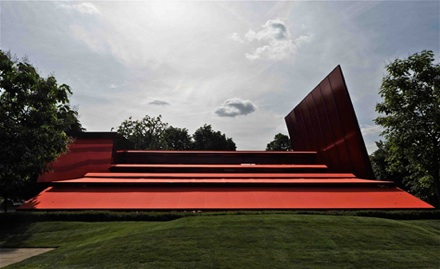 Earlier this week, Bloomberg News reported that an agreement has been reached in favor of Serpentine Gallery regarding its ongoing competition with Damien Hirst for the space formerly occupied by a munitions store, The Magazine, in Hyde Park, London. According to an “anonymous inside source,” award winning architect Zaha Hadid will oversee the transformation of the Kensington Gardens venue, which is currently being used as a kennel for stray dogs. Under the direction of Julia Peyton-Jones, the gallery will feature modern and contemporary artwork, and will be open to the public free of charge. An official public announcement of the decision is expected in the coming weeks.

Damien Hirst, the only other major bidder for the space, planned to use it to exhibit work from his personal collection, as well as some of his own, widely-recognized pieces such as “The Love of God.” Hirst is best known for his unconventional art world etiquette and bold marketing tactics. Earlier this year, he self-sponsored a show at the Wallace Collection in London, and recently completed a project in collaboration with The Oceanographic Museum of Monaco.

This entry was posted on Thursday, September 30th, 2010 at 6:45 pm and is filed under Art News. You can follow any responses to this entry through the RSS 2.0 feed. You can leave a response, or trackback from your own site.