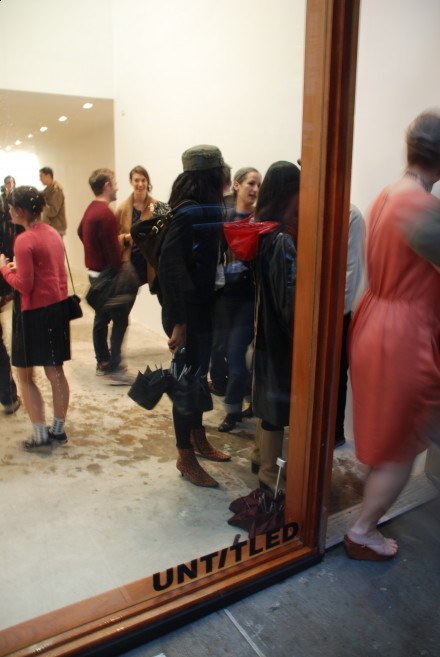 On the evening of September 12th, New York’s Lower East Side was bustling with gallery openings celebrating the onset of fall exhibition season. One of the most exciting events that night was at 30 Orchard Street, where Rental Gallery reopened its doors in a new location under the new name UNTITLED. Formerly located on the sixth floor of a building on East Broadway, UNTITLED’s sleek, recently-renovated pencil tower, designed by Andrew Ong, offers a fresh and more accessible ambiance. 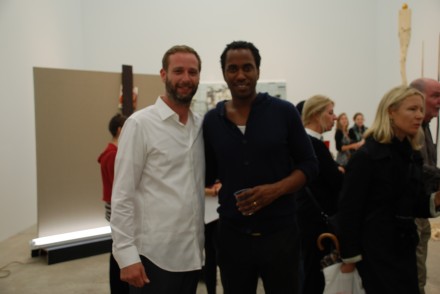 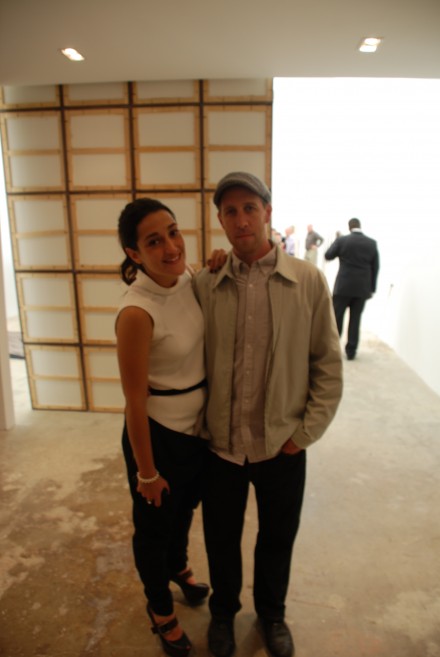 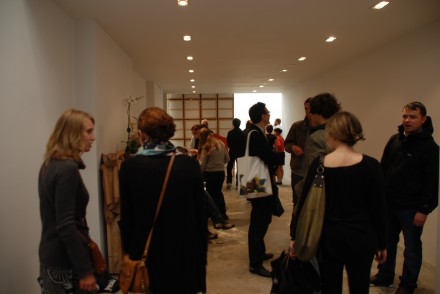 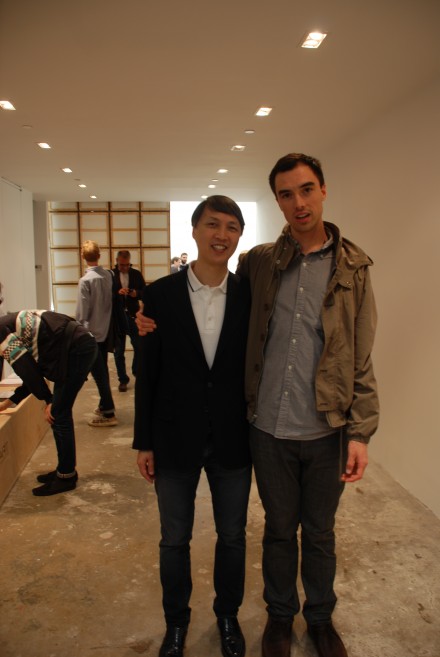 Gallery owners Joel Mesler and Carol Cohen present a skillfully-curated first show featuring large-scale installations by five emerging artists. Heather Cook, Brendan Fowler, and Phil Wagner are all currently based in Los Angeles; David Adamo works in Berlin, and Rashid Johnson in New York. Through each artist’s differing approach, the works on view reveal five discreet personal visions. Each mixed media installation purposefully reveals an individual artistic process. Mesler and Cohen strive to underplay the image of the gallery itself, in order to emphasize the artists on display.

On Thursday September 9th, Art Observed interviewed Mesler and Cohen, at the height of their preparation for UNTITLED’s opening:

AO: What are you looking forward to most in opening UNTITLED?

JM: Working with the artists and giving them a bigger space and more beautiful space to realize their genius.

CC: And having each show be better then the next.

AO: What do you hope UNTITLED will bring to the New York Art World?

JM: A change in the conversation.

CC: We want to give more stability to the Lower East Side as, not necessarily an art gallery district, but a way of seeing galleries. A place that can be professional without being in Chelsea. We want to give everyone more access to the gallery world. We are not hiding in our penthouses in Tribeca.

AO: In what ways will UNTITLED set itself apart from the rest of the New York art scene?

AO: How do you anticipate your work with Rental Gallery influencing UNTITLED?

JM: It’s a very similar spirit to Rental, but realized in a different way. We are taking all the good aspects of Rental and canceling all the quirky things.

AO: What are some of the things that you cherish about Rental that you hope to bring to life at UNTITLED?

AO: How did you choose the gallery’s name?

CC: There were a lot of people looking forward to what the name was going to be and there was so much expectation of the name, so we (ironically) chose UNTITLED.

JM: The gallery is trying to remove itself and distance itself and put the spotlight on the artists.

AO: How did you choose the artists for the opening show?

JM: The direction that these five artists took is totally unique. 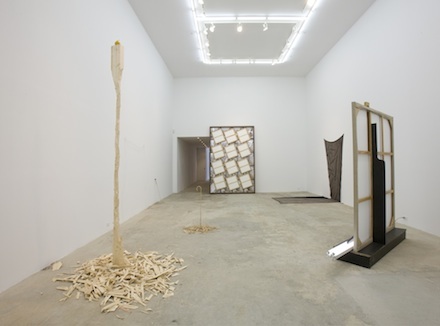 The first work encountered in the show is that of David Adamo. Adamo has created three sculptures that incorporate objects that are socially categorized as powerful and violent. He manipulates them and strips them of their identity until they become delicate and powerless. Adamo is inspired by his obsessive qualities, both personally and artistically. In addition to his visual art, Adamo has worked on many performance pieces in which he physically expresses similar themes. Adamo’s works at UNTITLED have a prop-like quality, reminiscent of the artist’s performance pieces. In one of his works, Adamo has left a pear lingering far above reach on a wood sculpture that he meticulously chipped to a thinness that questions the sculpture’s balance. A pile of wood shavings surrounds the sculpture to display the artist’s process. This year, Adamo was also featured in the 2010 Whitney Biennial. 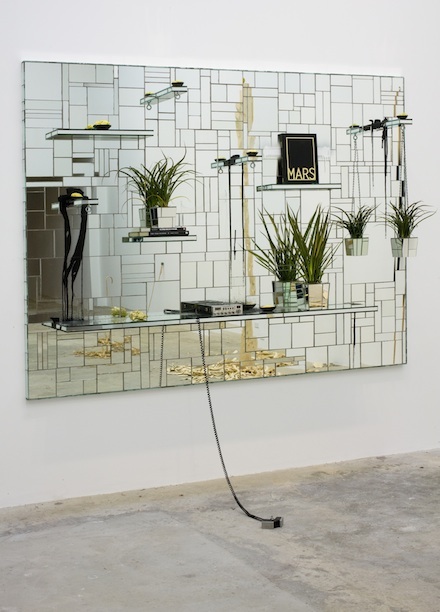 Deeper into the gallery space is Long Distance by Rashid Johnson. Johnson’s artistic goal is to redefine inaccurate notions of social history, politics and spirituality. Working with objects tied to science and black history, Johnson creates a dialogue with the complexities of contemporary culture, exploring different layers of society classified by race, identity, and sexuality. While Johnson is outwardly focusing on the strengths of African American history instead of the horrors, Long Distance incorporates mirrors so that the viewer must insert their own identity in the artist’s discussion of contemporary culture. His work suggests the beginning of a social conversation of unparalleled intimacy. 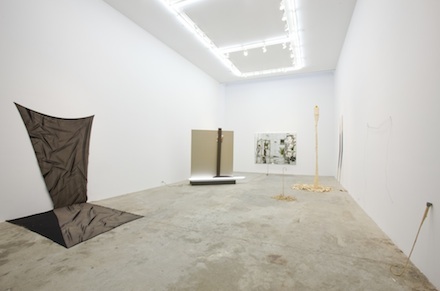 Heather Cook’s work emphasizes material experimentation, with her current focus being on cotton jersey. Her cloth paintings are an homage to the history of minimalism, while also engaging thoroughly with the material at hand. By creating marks with bleach, Cook produces a negative mark, rather than an additive mark, and thereby revealing what the cloth once was. She also displays her artistic process clearly without infringing upon the simplicity of the work. The bleach marks trick the eye; they are carefully rendered to make the fabric appear to be folded and wrinkled, but the artist has, in actuality, pulled the fabric quite taut against the wall and floor.

Phil Wagner’s mixed media work, titled i-D, has cubist properties, and also a touch of the ready-made. Wagner juxtaposes everyday objects, such as fluorescent tube lights and magazines with canvas and wood. Similarly to Adamo’s inclusion of his wood shavings, Wagner makes an effort to keep the constituent elements of the piece apparent. 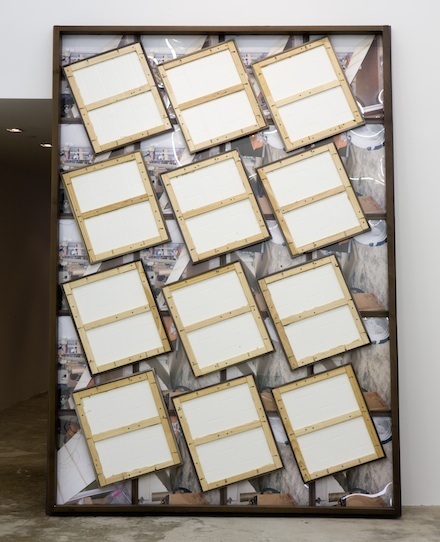 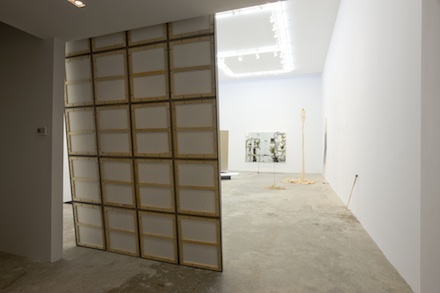 Brendan Fowler’s, Wood Fell (May 20th 2010), is the final piece in the show. Fowler is a conceptual artist who works in collage, text, and performance. He also founded the musical group BARR, which has performed with bands like Animal Collective. The artist is also the co-editor of the arts and culture publication ANP Quarterly Magazine, the Artist Network Programs. Fowler’s lifestyle is reminiscent of the pop icon Andy Warhol, in that his work expresses different aspects of his vision through different art forms. Fowler’s piece at UNTITLED is a large-scale collage made of archival inkjet, frames, and plexiglass.

This entry was posted on Sunday, September 19th, 2010 at 1:00 am and is filed under Art News. You can follow any responses to this entry through the RSS 2.0 feed. You can leave a response, or trackback from your own site.