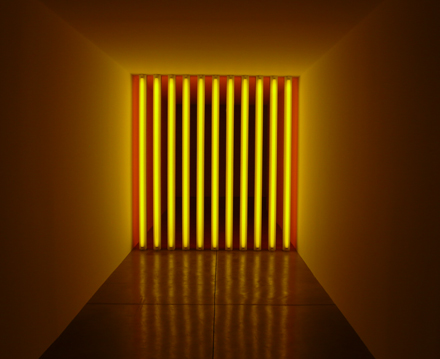 The current exhibition of early works by Dan Flavin at Paula Cooper Gallery offers a concise exploration into the artist’s experiments with the effect of colored light on architectural space. A 1960s minimalist, Flavin’s works realize the infinite possibilities inherent in the simple gesture of a florescent light in a gallery, which, despite a limited vocabulary, create varied optical and experiential situations. Flavin’s works confound the way that art is viewed by testing the limitations of opticality while stressing color as a medium in its own right. Instead of the viewer looking at a two dimensional object with painted colors, Flavin brings the color to the viewer, aggressively inserting his color combinations into the viewer’s eyes. That is, instead of the art reflecting color, it is emitting the color as light. If the purpose of art is to look, to see, to contemplate a visual object, then Flavin’s art frustrates this standard notion by making it difficult to look directly at the art object itself. This difficulty of viewing the art object directly causes the viewer to notice the effect of light and color on objects, thereby implicating the architectural space within the work. The works thereby occupy every part of the room, using the unusable spaces of a gallery–the corners and the floors, spaces incapable of displaying artworks. 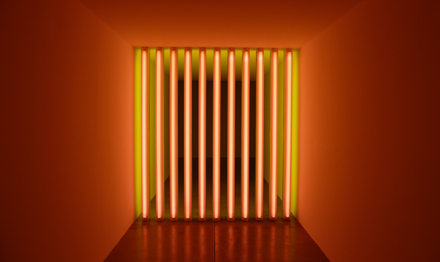 The front room of the gallery space exhibits two corner pieces– untitled (1969) and untitled (1968); both works use forward facing and backward facing light fixtures to form the composition, which creates a foreground color and a background color. Both works cannot be separated from their architectural placement. The third work in the room, untitled (to Mr. and Mrs. Thomas Inch) (1964) consists of four forward-facing, differently colored lights in a columnal shape. The effect of this piece is quite different optically than the corner pieces, for instead of utilizing a background color to create depth, this work denies both depth and spatial relations. 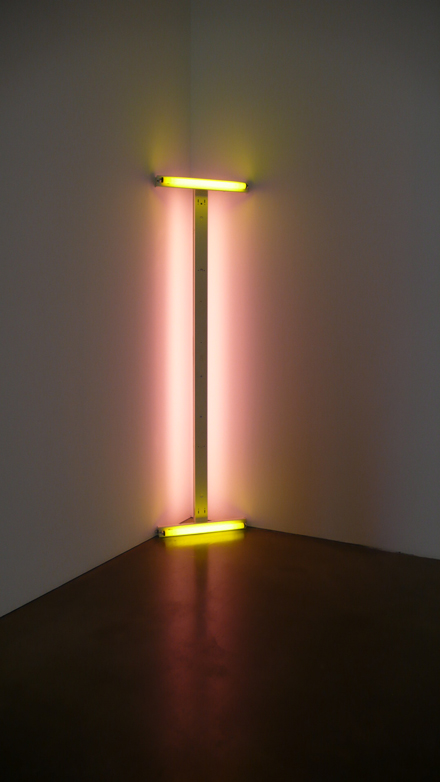 A product of sixties minimalism, Flavin’s materials remove the hand of the artist entirely, replacing it with a ready-made object. The optical nature of the works–the way that they address the eyes alone, and do not depict an object–presents the viewer with an environment that evokes artistic inquiries. The works only subject is the optical effect of color and light on a space, which is something that we experience every day. Flavin distills this experience, refining it and bringing it into focus. 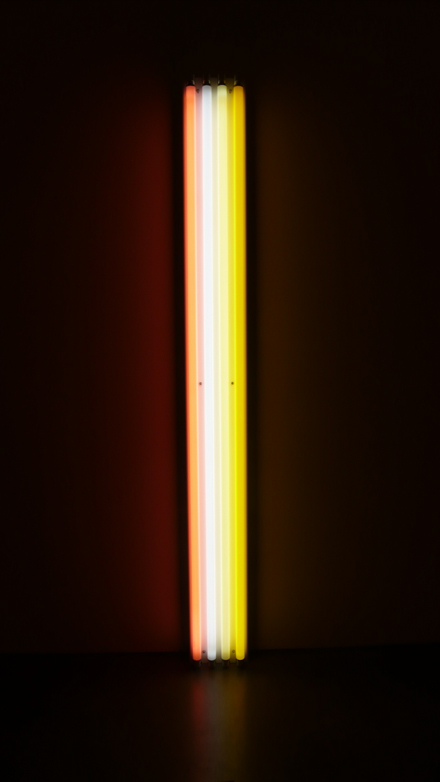 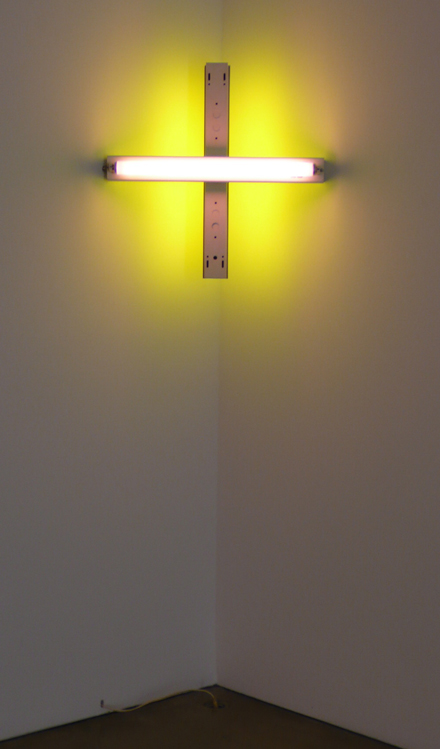 The larger room houses the work untitled (to Barry, Mike, Chuck and Leonard) (1972-1975), which is situated in a fabricated corridor. The combination of two contrasting colors examines the way that colors blend within the environment of the gallery, by using forward and backward facing lights to full effect. When viewed from one side of the corridor, the yellow color sits as a background to the pink overlay. The work denies the architectural function of a corridor, barring the passage and forcing the viewer to walk not around the work, as one would a traditional sculpture on a pedestal, but to circumvent it to the other side of the corridor. The piece also focuses on the intangibile, mysterious quality of color and light. Critics in the 1960s interpreted Flavin’s works as referencing the mystical aspects of light, and related it to Christian notions of holy light and halos, as well as the Byzantine reverence for light. The works at Paula Cooper are exhibited in darkness, which allows them to be free from the competition of other lights, providing a more dramatic setting (and one that Flavin originally used) for the art. While the works do evoke an ambient atmosphere, they also have non-monumental, non-transcendent qualities. Florescent lights have a visual trajectory of  corporate architecture, mass production, street advertisements, and the banal. The Duchampian use of non-artistic materials to evoke the essence of painting–the effect of light and illusion in our eyes–is both a challenge and an affirmation to what it means to see art. 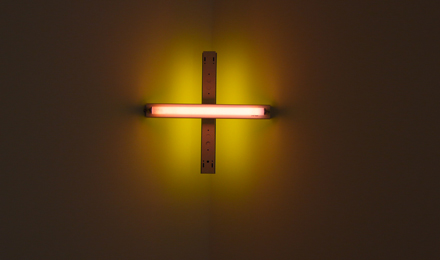 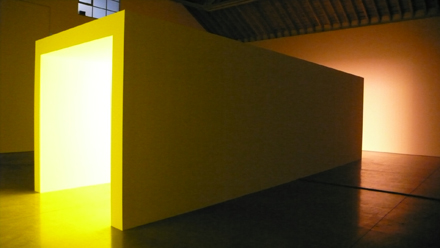 Dan Flavin was born in 1933 in Queens, and began making artwork in the late 1950s. His career began in 1961 when he worked on the icons series, which combined canvas with fluorescent lights. He later abandoned the canvas and used only lights in his exhibition at Green Gallery in 1964, which was recreated in 2008 by Zwirner and Wirth. Flavin had solo exhibitions in Basel, Baden-Baden, Frankfurt, and New York. Major permanent installations of Flavin’s work can be seen at the Chinati Foundation and Dia Beacon. The estate of Dan Flavin is currently represented by David Zwirner.

This entry was posted on Friday, September 17th, 2010 at 1:00 am and is filed under Go See. You can follow any responses to this entry through the RSS 2.0 feed. You can leave a response, or trackback from your own site.