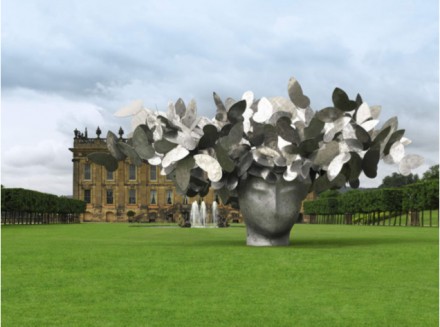 more photos, images and links after the jump…

Manolo Valdés’ (b. 1942) aluminum sculpture, Butterflies, holds a coveted position on the Duke’s private lawn, directly in front of Chatsworth House. The sculpture was created earlier this year and measures over 9 meters in width. 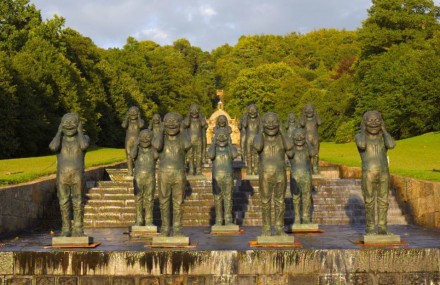 Yue Minjun (b. 1962) will show a set of bronze figures in an installation titled Contemporary Terracotta Warriors. The artist’s trademark smiling men refer to one of China’s greatest cultural treasures – the Qin dynasty terracotta warriors. While those ancient warriors number 8,000, Minjun’s army is composed of 25 figures. 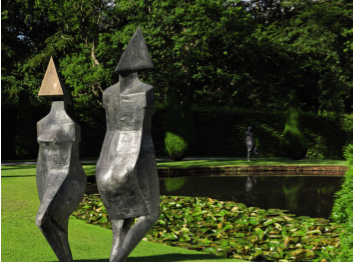 British artists figure prominently in this year’s exhibition. Four works by Lynn Chadwick (1914-2003) - Ace of Diamonds III, Stairs, High Wind IV and Three Elektras - will be on view. Stairs is the largest of a series of sculptures he produced late in his career based around the theme of two female figures ascending/descending a staircase. 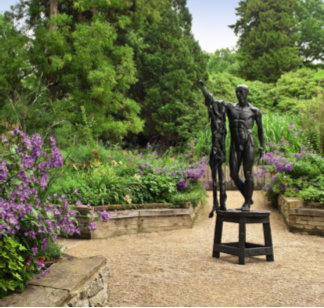 Damien Hirst’s (b. 1965) St. Bartholomew will be installed in the Sensory Garden at Chatsworth. The sculpture depicts the saint, who was skinned alive, standing on a stool with his pelt hanging from one arm. 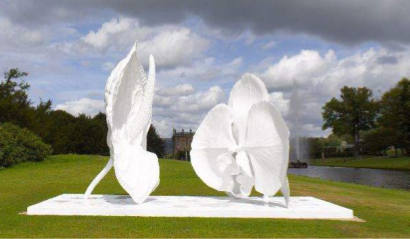 Mark Quinn, The Engine of Evolution, via Sothebys.com

In keeping with his preoccupation with biology, genetics, and flora, Mark Quinn (b. 1964) will show The Engine of Evolution. The sculpture consists of two giant flowers reduced to their reproductive elements.

While this is only the fifth year Sotheby’s has held this selling exhibition at Chatsworth, The Chatsworth House Trust and the Devonshire family have commissioned contemporary sculpture for display in the 105-acre garden since 1995. If the past is any indication, we can expect to see a sixth annual sale at this time next year.

Mefford will take over CITE July 1 after the resignation of Linda Johnson.

“Linda’s done a great job,” Mefford said. “She founded it, sustained it well — it’s really a model for the types of businesses we’re establishing in the state,” he said of the technology based economic development company.

Johnson resigned roughly a year after the unexpected death of her husband to spend more time with her son, Will, 9.

He previously worked at CITE as the director of ConnectKentucky and CITE Research, where he was responsible for managing ConnectKentucky initiatives as well as overseeing and directing the research operations at CITE.

Commerce Secretary Jim Host praised Mefford for his work in the state capital.

“For him to have this opportunity at this stage of his career is terrific,” Host said. “He is a very talented young person, highly intelligent and full of integrity, and an impeccable code of ethics. I’m only sorry about one thing — I didn’t have him long enough.” Host told the selection committee they couldn’t find a better person, and also praised the past leadership of Johnson. bowlinggreenkynow.net bowling green ky

“I think Linda Johnson has done a superior job,” Host said. “And this group is now ready for someone to bring a different perspective and who will continue the efforts she began.” Mefford said CITE is at a second genesis — the company, which has been very research focused, is now beginning to become an implementation company.

“CITE is a nationally recognized, technology-based organization,” Mefford said. Its main role is to manage and operate Gov. Ernie Fletcher’s ConnectKentucky initiative, which is designed to improve the competitiveness of Kentucky’s technology-based industry.

To do so, it brings together state government, universities, communities and the private sector to formulate and implement technology strategy, he said.

Mefford said technology is the key to the country’s economy.

“We have to make changes,” he said.

And when he talks about technology, he doesn’t want it to be limited to the idea of people sitting behind desks in front of computers.

“It’s technology that transcends industries,” Mefford said. “Technology that’s as important to agriculture as it is to homeland security.” “Drive down the road to Franklin and talk to the dozens of scientists who have located there from around the world to Sygen (International),” Mefford said of the holding company of PIC International.

The company started as a farm-based corporation, and because of its application of technology, PIC International is going to become a world leader in genetics production, Mefford said.

Part of the reason those scientists can locate in Franklin is their easy access to technology, Mefford said.

That means they don’t have to locate in Berkeley, Calif., London or Hong Kong, Mefford said.

“They can be in Franklin where housing is affordable, energy is cheap and they can raise their kids in a strong, rural Kentucky community,” he said.

That highlights some of the key issues in getting more companies to locate in southcentral Kentucky, Mefford said — the quality of life and the cost of living.

“I grew up in a family of farmers,” Mefford said. “I understand rural Kentucky and I understand the resistance some people have to using technology. But what we have to understand is that technology doesn’t have to diminish what we’re proud of as Kentuckians.

Mefford pointed out that if Kentuckians don’t do a better job of using technology in the state, Kentucky’s heritage is going to get up and leave.

“Addressing that challenge is the bottom line of ConnectKentucky,” Mefford said. “We have to determine how to best grow the jobs that are going to keep our sons and daughters home.” CITE’s efforts ConnectKentucky is pursing three goals, Mefford said, as he cited the ideas of Secretary Host.

It has to support small business and create a culture of entrepreneurship in Kentucky. To do so, it must provide adequate access to technology infrastructure, particularly in rural Kentucky, he said. There also needs to be access to capital and affordable health care.

It has to recruit the talent, individuals and companies, who have links to Kentucky. He referenced a great quote from former Kentucky Gov. A.B.

“Happy” Chandler, who said he never met a Kentuckian who wasn’t on their way home.

“Lots of Kentuckians have left the state because there haven’t been a lot of opportunities in the past,” Mefford said. “When we do that, we’ll really reverse the drain of our population and attract talented people from across the country.” ConnectKentucky has to do a better job of coordinating efforts of various economic development engines across the state, including those from universities, state government, local communities and the private sector.

“Say if a local community is interested in a technology-related project, CITE may do initial research, assess cost and then have the cadre of partners (step in) — universities, schools, state and federal,” he said. in our site bowling green ky

“For our private partners, CITE can help navigate the waters, connect the dots (through the) bureaucracy.” That includes determining if any grant money may be available for a project and resources that are available from universities.

For example, CITE is working with PIC International to help attract state and federal research dollars and potential matching dollars from other, private-sector partners.

“Universities are a critical piece of the equation — right now universities are educating the work force for competing states,” Mefford said. “In other words, we subsidize our children’s education in Kentucky. They graduate, pack their bags and work in Virginia, Alabama, Ohio, Indiana, North Carolina and Tennessee. They’re getting our kids once they graduate and giving them good jobs — we have to reverse that and we do that by better (working together) with a common agenda to provide good jobs to the citizens.” CITE also works to address a technology disparity in the state, a gap between who has broadband access in the state and who doesn’t. The gap exists primarily between urban and rural areas, Mefford said.

Those who want to start small businesses are more likely to do so in urban areas because businesses require high-speed Internet access, Mefford said.

It also means children in rural Kentucky don’t have the same access to education material that children in urban areas have.

“Much of the (education) content is broadband,” Mefford said.

Fletcher’s rural broadband bill was passed by the General Assembly in its last session.

The deregulation bill essentially leveled the playing field for various types of broadband Internet providers, Mefford said. Now all providers are regulated at the federal level.

The day the bill was signed, BellSouth stepped up to put broadband in 59 rural communities that didn’t already have it, and soon, other private sector companies will do so as well, he said.

As a result of the bill, Kentucky’s level of broadband access, 65 percent, will move up to 85 percent to 90 percent, Mefford said.

Bringing broadband to the rural areas of Kentucky will provide an incentive for people who have left Kentucky and want to move back.

“We want people to be able to return to or stay in rural Kentucky,” Mefford said. “That’s part of the equation — to let them know the small, rural town where they grew up has broadband access. They can come back and not miss a beat.” This latter point hits home for Mefford, who returned from Washington, D.C., over a year ago. He came with his wife, Allison, and their son, Owen, 3. Allison grew up in the Bowling Green area.

“We wanted to raise kids in the county,” Mefford said. And one of the first things they checked on was broadband. Because it wasn’t available, the Meffords purchased satellite broadband access.

This entry was posted on Saturday, September 11th, 2010 at 1:00 am and is filed under Go See. You can follow any responses to this entry through the RSS 2.0 feed. You can leave a response, or trackback from your own site.