AO On Site – Paris: FIAC 2010 Mid-Fair News Brief and Photo Set 1 of 2 (final photo set to follow the conclusion of the fair)

Matthew Day Jackson, The Way We Were, 2010. All photos by Tiphaine Popesco for Art Observed unless otherwise noted

While pension strikes increasingly paralyze all other aspects of life in Paris, the activities at FIAC have seemingly managed to go on unbothered. Two days into the fair, visitors have already lauded this year’s success. According to ArtInfo, a new physical layout of the venue  has dramatically improved the experience. Surly other changes, namely the headlining debuts of Gagosian and the Rosenblum Collection, as well as healthy sales at such galleries as Hauser & Wirth, Thaddeus Ropac, Blum and Poe, and David Zwirner have fueled this sentiment. Details on sales and the first in a series of two comprehensive photo sets follow the jump. 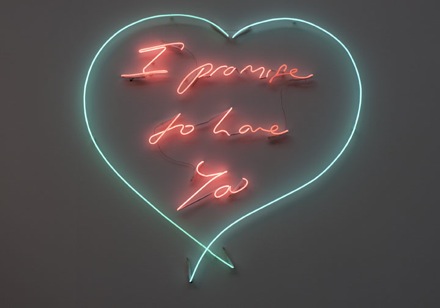 Tracey Emin, I Promise to Love You, courtesy of Lehmann Maupin Gallery

David Zwirner via (Art Info)
– Adel Abdessemed’s “Go On,” a pair of cement boxing gloves from an edition of five, sold four at $50,000 each.
– The artist’s 2010 wall-sized installation, “Silent Warriors,” comprised of approximately 200 handmade metal masks sold for $280,000 to a major Swiss collection.

Hauser & Wirth (via Art Info)
– Matthew Day Jackson’s “The Way we Were”, a series of scultped skulls done in titanium, aluminum, bronze, copper, iron, lead, and steel (photo above), a 2010 edition of three, sold for $130,000 each.
– Jacksons’s vision of the aftermath of the Hiroshima atomic-bomb attack, “August 6, 1945” in scorched, found, and painted wood sold for $125,000.
– Another of Jackson’s work which was inspired by a Life magazine cover, “August 8, 1969”, celebrating the exploits of moon-walker Neil Armstrong in gypsum plaster and found, painted, and scorched wood sold for $120,000.
– Paul McCarthy’s 2009 bronze pirate “Shit Face Fucked Up,” part of an edition of two plus one artist proof, saw two from its edition sell at $750,000 apiece.

A Selection from FIAC 2010, Photos by Tiphaine Popesco and Nathaly Stern for Art Observed

At the Grand Palais: 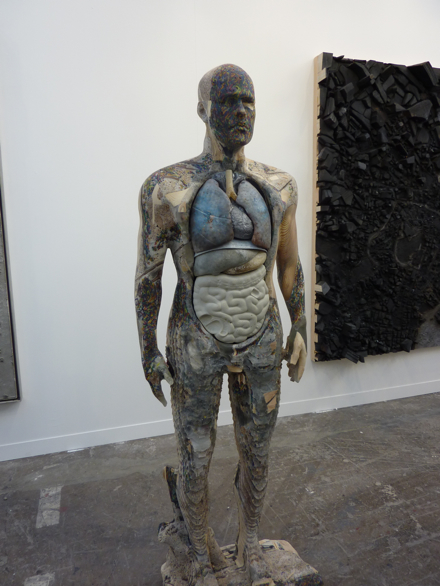 This entry was posted on Thursday, October 21st, 2010 at 10:46 pm and is filed under Art News. You can follow any responses to this entry through the RSS 2.0 feed. You can leave a response, or trackback from your own site.