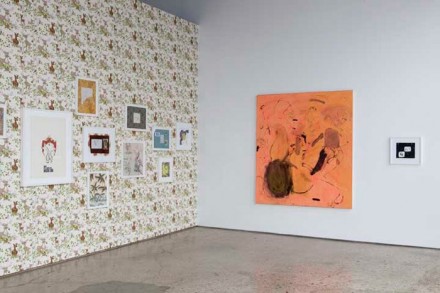 Currently on view at 303 Gallery is a retrospective of work by Sue Williams, spanning the last twenty years of the artist’s career, curated by Nate Lowman. Lowman’s curatorial objective was not to chronologically organize the objects on view, but to contextualize her experimentation with different mediums and socio-political themes within the trajectory of her stylistic development. Together, the two artists revisited Williams’ work and selected a small representative body of pieces produced between 1989 and the present, which comment and reflect upon her current practice and conceptual goals. 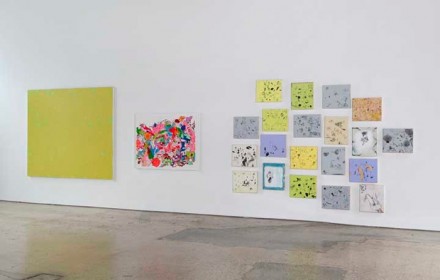 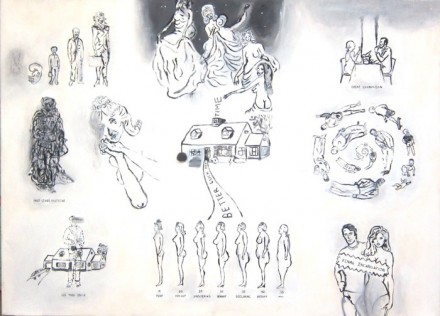 Williams’ newest work conveys an outwardly anti-war sentiment, as demonstrated in title chosen by Williams and Lowman for the show. “Al Qaeda is the CIA,” Williams’ eighth exhibition at 303 Gallery, is the most comprehensive gallery show for the artist to date. While Williams has always aimed to solicit confrontation with her work, she has historically explored many different themes and topics. Immediately following her move from Chicago to New York in 1981, she focused on her personal struggle with sexual and domestic abuse. Before meeting her husband, Williams was involved in a series of abusive relationships. As she described of this transitional moment, “coming out of it I was angry and wanting to share.” This moment coincided with a strong feminist presence in contemporary art, which Williams also addresses in her work of this period. Her ability to generate visual commentary that is both light-hearted and cynical yields an honest and personal expression of gender politics and social awareness. Her 1989 painting, Better Luck Next Time, represents the progression of the female body in a harsh and confrontational manner. 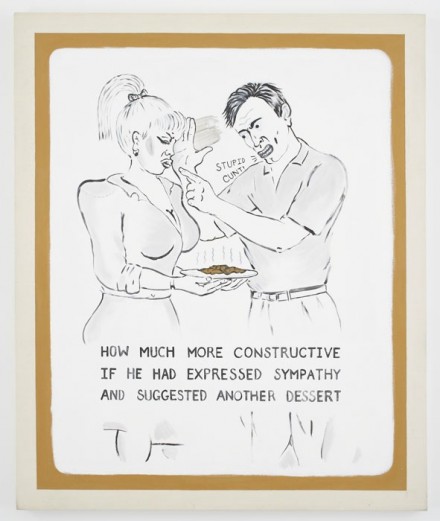 Though she went on to explore a broader range on themes in her work, Williams never fully relinquished her interest in gender politics. She initially gained recognition in the art world for integrating literary sarcasm with cartoonist figures. In her 1990 painting, Dessert, she illustrates a man slapping a woman and calling her a “cunt,” as she serves him a plate of steaming shit. The woman says “How much more constructive if he had expressed sympathy and suggested another desert.”

Williams work of this period attracted both loyal followers and staunch critics. She later took a drastic turn in the development of her style and began focusing on painting, her graduate school trade. In the mid-nineties, Williams began to explore working on a larger scale. In 1996 she created Neon Pink + Manly, an image incorporating more painterly brushwork and increasingly abstract qualities. By 2005, she began introducing the biomorphic forms of her earlier style to into abstract paintings, as in With Polka Dots of 2009. Today she is considered a sophisticated painter of formalistic abstractions. Where the artist was once more reliant on narrative content, her thematic concepts and formal practice are now fully integrated. 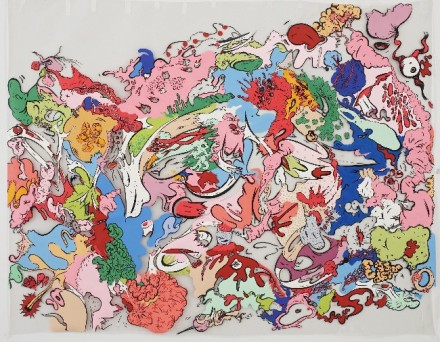 From a distance her work is bright and playful, while still containing details of the gruesome and the absurd. Inside Job and 911 Truth, both produced in 2010, are representative of Williams’ newest series. These small-scale works make a clear statement about the war, through intricate layers of propagandistic motifs and and direct-yet-nuanced visual commentary. 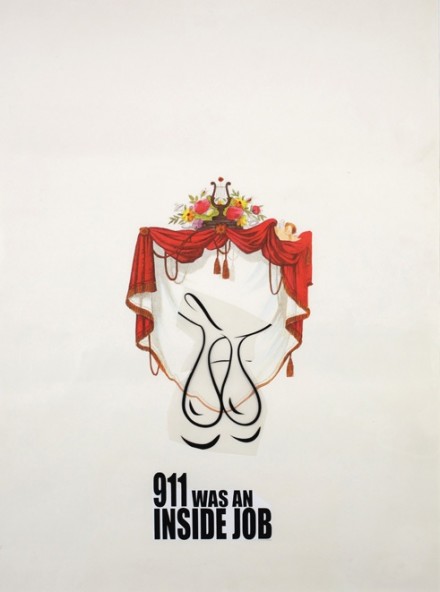 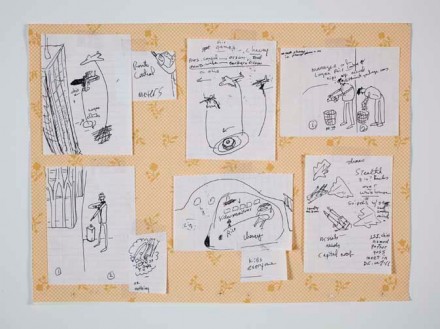 In addition to this exhibition, Williams’ work is also currently on view in “Collecting Biennials” at the Whitney. She has exhibited internationally, and held solo shows at venues including the Carpenter Center at Harvard University, the IVAM in Valencia, Spain, the Vienna Succession in Vienna, Austria and the Centre d’Art Contemporian in Geneva, Switzerland. She currently lives and works in Park Slope, Brooklyn.

Curator and artist Nate Lowman lives and works in New York . His work has been exhibited at the Astrup Fearnley Museum in Ohio, in addition to many promimant New York instuttions, such as, the MoMa, the Guggenheim, the Whitney, and P.S.1. He has curated exhibitions at Gagosian Gallery in New York with artist Adam McEwan, The Station in Miami with curator Shamim Moman, Nicole Kalgsburn Gallery in New York, and New Langton Arts in San Fransisco.

This entry was posted on Tuesday, October 12th, 2010 at 1:00 am and is filed under Art News. You can follow any responses to this entry through the RSS 2.0 feed. You can leave a response, or trackback from your own site.