March 3rd, 2021
REFERENCE LIBRARY
Home » AO On Site (With Video) – New York: Francis Cape “The Other End of the Line” at Gansevoort Plaza under the High Line

AO On Site (With Video) – New York: Francis Cape “The Other End of the Line” at Gansevoort Plaza under the High Line 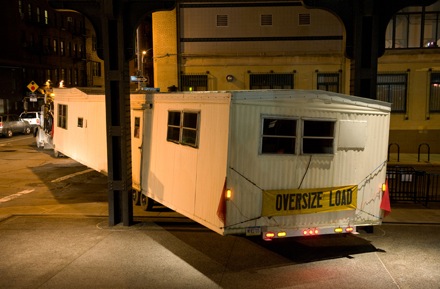 Trailer in transit. Courtesy Friends of the High Line.

Currently on display in Gansevoort Plaza, beneath the High Line, is Francis Cape’s The Other End of the Line. Friends of the High Line sponsored this first major public installation in New York City for Cape, which presents a previously residential trailer relocated to its new urban setting from Sullivan County, New York–not far from the artist’s permanent residence. In its new temporary home, Cape has transformed the trailer into an exhibition space, featuring works by other artists also from upstate New York. Art Observed attended the opening of The Other End of the Line, on the evening of October 22nd, and had the opportunity to speak with the artist afterward for a more personal discussion of the project. 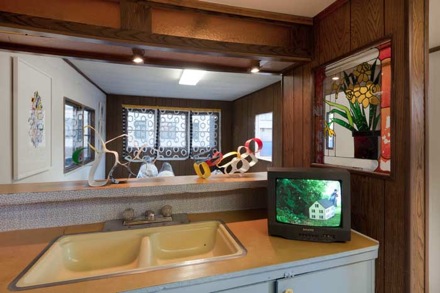 Francis Cape, The Other End of the Line, 2010. Courtesy Friends of the High Line.

Francis Cape conceived his latest project in what has been a noted change of direction in his art over the past five years. After visiting New Orleans following Hurricane Katrina in 2005, Cape dealt with the subject directly in his work a number of times, but has since adapted these themes locally to his area: “I immediately wanted to make the connection with what I see where I live in Upstate New York, the same kind of inequality of opportunity…the way that Katrina showed us what our society is really like is something that I wanted to continue to explore.” 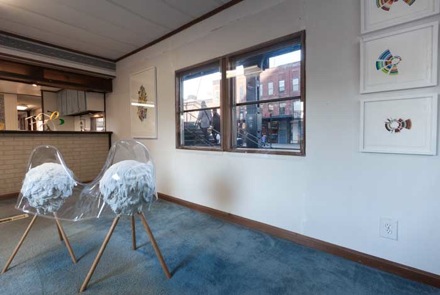 On visiting the High Line, Cape recognized the logical association that the venue shared with his work, as the park formerly served as part of a freight line delivering raw materials from the rural upstate region to fuel economic growth in lower Manhattan. The idea of using a trailer in the space recalled the contextual significance of these structures: “Famously the FEMA trailers showed up within a year of Katrina hitting, and it was a good response to homelessness, but seeing trailers as an emergency response vehicle contrasted with the mobile home park at the end of my street, which I know is not an emergency response vehicle, this is where people live permanently.”

In the installation Cape hopes to impart on viewers the concept of what he calls, “past mobility,” which his trailer shares with the High Line. While both structures are rooted in designs that imply speed and motion, neither function practically for transportation anymore. Ultimately, it is the markedly different functions that these structures currently serve that Cape hopes bring into dialogue. 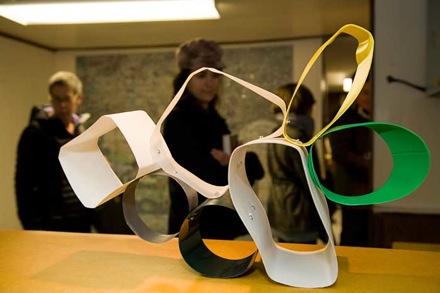 Working with Francis Cape, curators Ian Berry and Lauren Ross assembled an exhibition that utilizes virtually all of the trailer’s interior space. The thirteen upstate New York artists who participated were chosen for work that similarly addresses the socioeconomic conditions of their native area. The Other End of the Line will be open to the public from 2:00 — 8:00 PM on weekdays, and from 11:00 AM — 5:00 PM on weekends, until November 21st. 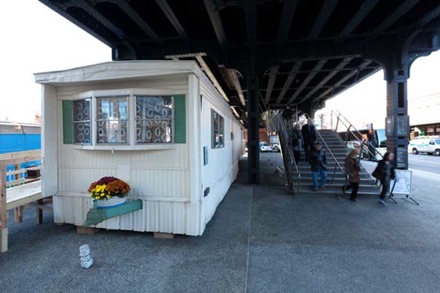 Francis Cape, The Other End of the Line, 2010. Courtesy Friends of the High Line.

This entry was posted on Thursday, November 11th, 2010 at 11:00 am and is filed under Art News. You can follow any responses to this entry through the RSS 2.0 feed. You can leave a response, or trackback from your own site.

One Response to “AO On Site (With Video) – New York: Francis Cape “The Other End of the Line” at Gansevoort Plaza under the High Line”