John Baldessari, The Overlap Series: Jogger (with Cosmic Event), 2000- 2001 Image © John BaldessariLos Angeles comes to New York with “Pure Beauty,” a survey of work by conceptual Californian artist John Baldessari. With a career spanning over five decades and a body of work composed of nearly every media, Baldessari pioneered many of the tropes associated with conceptual art today.  In “Pure Beauty,” established themes of language and seriality intersect with Baldessari’s interest in cinema, pedagogy and the culture of LA. 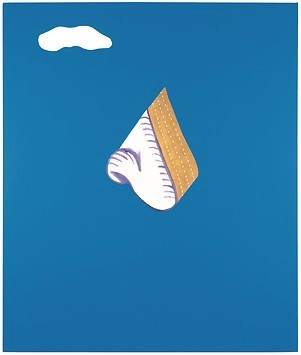 The exhibition begins with the artist’s little-known figural paintings from the early 1960s, segueing into his ambitious photo and text works from 1966-68.  This first phase features the cartoonish “God Nose” from 1965, a painting depicts a nose, amputated from the face, floating in front of an Yves Klein blue background.  Baldessari returns to this examination of noses and ears in his later work, citing little visual interest in images of eyes and mouths, which, he claims, are given “a lot of attention” in art history.

In the late 1960s the artist moved away from figural painting and worked exclusively with text, his own photographs, and found imagery.  His most famous works of the period combine snapshots of his hometown of National City, California with painted text, often from instructional books on photography.  These works were produced using photo-sensitized canvas onto which his photographs, often taken while driving, were projected.  The artist hired a sign painter to realize the text of the work, creating a series that is both visually uniform and privileges the artist’s ideas over his brushstroke. 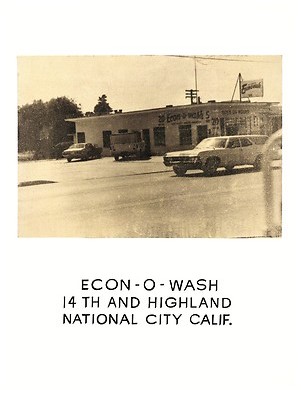 In 1970, Baldessari gathered nearly all the art he had made between his graduation from art school in 1953 and the introduction of the text paintings in 1966 and brought it to a mortuary crematorium to be incinerated.  Some of the ashes were interred into a book-shaped urn, while some were baked into cookies, suggesting a life-cycle of the work.  A paid death-notice was published in the Los Angeles Times. RIP, John Baldessari, painter.

It was after The Cremation Project that Baldessari began a move towards more conceptual “projects” documented through video and photography.  The 1971 video “I Will Not Make Any More Boring Art,” documents the artist’s hand in extreme close-up writing and rewriting the phrase “I will not make any more boring art” in pencil on a sheet of white paper.  The work was conceived through an invitation to the artist to participate in an exhibition at the Nova Scotia College of Art and Design in Halifax.  The school lacked the funds necessary to fly the artist to Canada from his Los Angeles studio, so he devised a work to be realized by the college’s students.  They were told to write the phrase on the walls of the gallery in repetition, mimicking the grade school punishment of being banished to the chalkboard after misbehaving.  The actual wall used in the 1971 exhibition was on view earlier this year at the Whitney Museum as part of their exhibition “Off the Wall: Part 1—Thirty Performative Actions.” 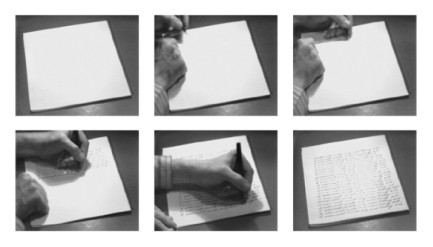 Also on view in this gallery is “Goodbye to Boats (Sailing In),” conceived between 1972 and 1973.  This project was realized after Baldessari found an old photograph of his father waving goodbye to his mother as she sailed away on a ship bound for Europe.  The artist replicates this action himself, waving to a boat filled with passengers he did not know.  Baldessari explains, “The pain and anxiety of the act is counterbalanced by repeating it endlessly, perhaps obliterating the sadness.”

Beginning in the early 1980s, Baldessari’s references to cinema came to the fore through his photo-compositions. These works were derived from film stills found in stock warehouses in Hollywood. “Kiss/ Panic” from 1984 showcases two early themes explored by the artist: guns and kisses.  Curator Leslie Jones affirms that the work recalls the rectilinear composition of Piet Mondrian, and Baldessari self- identifies as a “closet formalist.”  He explains, “I think of the images that I use as units, like words might be units, and I construct similarly to a good poet, where I’m trying to get a certain kind of syntax, a certain explosion, a meaning when these units collage, building up an architecture of meaning, so to speak.”  In his photo-compositions, Baldessari continues to examine literary techniques as he had in his earlier works, though these compositions mark a move away from text and towards a new interpretation of visual language. 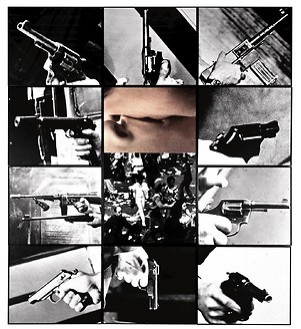 “Heel” from 1986 showcases a developing interest in anonymity of the figures featured in his found images.  Baldessari claims to have associated these figures with the power players in the art world, often dealers, who he felt were more in control of his work than he was.  By blacking out the faces of these men and women he sought to regain some of their control.  This action also suggests the indistinguishable quality of these figures, stripping them of any personal identity. 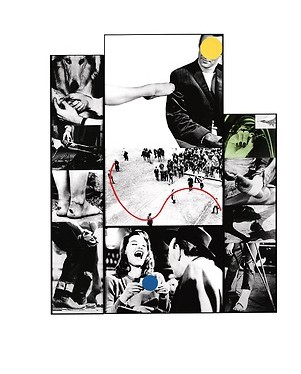 The show concludes with his irregularly shaped and over-painted works of the 1990s and 2000s, including “The Overlap Series: Jogger (with Cosmic Event),” conceived between 2000 and 2001. In this work, two disparate scenes, a black-and-white film still from a Buck Rogers movie and a color snapshot captured by the artist in Venice Beach visually intersect, alluding perhaps to the artist’s geography and divergent notions of life in Southern California.

A multimedia installation designed for the retrospective in Los Angeles was absent from the New York show, which ended with a smattering of works realized in acrylic paint, marking the artist’s return to work on canvas. 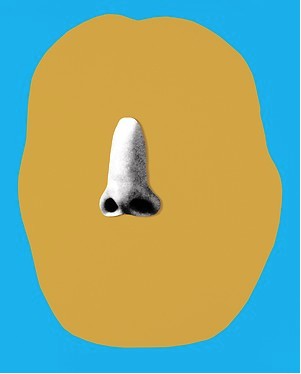 This entry was posted on Monday, November 1st, 2010 at 12:02 am and is filed under Art News, Go See. You can follow any responses to this entry through the RSS 2.0 feed. You can leave a response, or trackback from your own site.