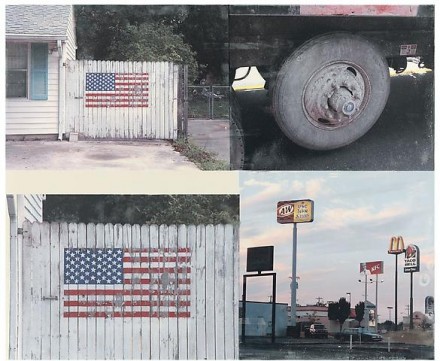 Currently on view at Gagosian Gallery’s large Chelsea space on West 21st street is the first major retrospective of Robert Rauschenberg‘s work since his death in 2008. The artist was represented by Pace Gallery for fifteen years until this past June, when Gagosian gained exclusive commercial representation of the artist’s estate. This exhibition is presented by Gagosian in collaboration with the Estate of Robert Rauschenberg, and is accompanied by a beautifully-illustrated catalogue with essays by art historians James Lawrence and John Young. 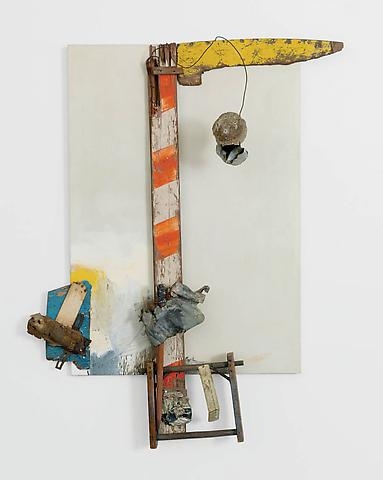 Rauschenberg (b. 1925 in Port Arthur, Texas) initially gained recognition in the 1950s as American stylistic interests began shifting away from Abstract Expressionism to Pop Art. Rauschenberg’s personal style was sometimes described as “Neo-Dada,” and often compared with the work of his contemporary Jasper Johns. Today he is admired and described primarily as a mixed media artist who worked with found objects, often quoted as saying that he “wanted to work in the gap between art and life.” Like Duchamp, Rauschenberg questioned the distinctions, if any, between art and everyday objects.

Included in the Gagosian retrospective are a number of the artist’s early works, some of which have not been exhibited in the last thirty years. The large gallery space provides a unique opportunity to view historically-significant paintings and sculpture alongside the artist’s lesser-known pieces, paying homage to and exposing the process behind Rauschenberg’s extraordinary impact on the art and visual culture of his time. The show invites viewers to consider the many ways in which he has inspired and affected American artists and the international market over the last half-century. While Rauschenberg’s career can be divided into many stages and collections, the current exhibition is organized primarily by materials rather than chronology. 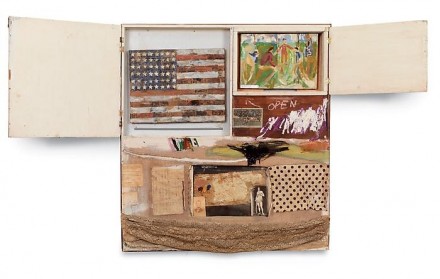 The first three works in the gallery are Rauschenberg’s “Combine” paintings, part of an early major series exploring the format. They are a group of mixed media works created by Rauschenberg in New York City.  The “Combines” incorporate urban debris, found objects, and art reproductions, providing commentary on 1950s city life and culture. Greenhouse, from 1950, a netted tower made of dirt, twigs, wire and broken glass, is situated to the left of an installation juxtaposing Jasper Johns “Flag” with a painting by the artist’s wife Susan Weil within a wooden cabinet, titled Short Circuit (1955). To the right is Aen Floga from 1961, a textural oil on canvas incorporating wooden debris from the New York City streets. 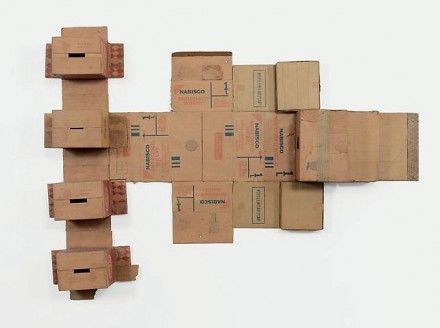 Rauschenberg’s Nabisco Shredded Wheat from 1971, in which the artist has created a wall installation out of cardboard Nabisco boxes, is shown adjacent to his silk-screens and other increasingly Pop-oriented works, as well as several of his tarnish on brass paintings. Untitled (Borealis) from 1991 juxtaposes dancing women, expressing an art form other than Rauschenberg’s, with a stop-sign, representing an urban necessity, and an image of Mickey Mouse, an American icon. 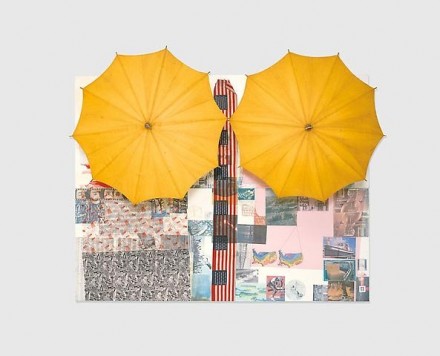 Further into the gallery is one of Rauschenberg’s most famous works, Untitled (Spread) from 1983, a painting that has two opened Umbrella’s projecting from it. Next to this are Japanese-inspired ceramic paintings such as All Abordello Doze 2 from 1982. 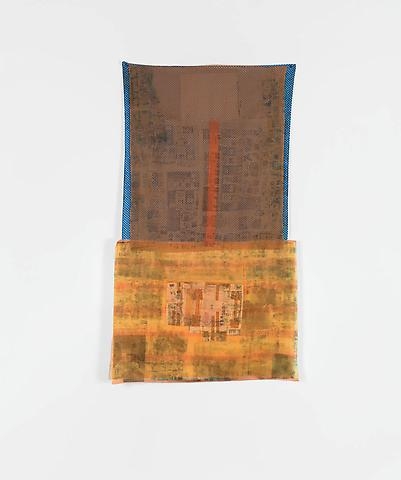 The eastern-side of the gallery features the artist’s more subtle fabric works. These mixed-media pieces, including Jackpot (Jammer) from 1975, a work made of curtain fabric with fruit bowls on it and the rod that the curtains were sold on, recall popular fabric styles and textile patterns from the 1970’s. Pilot (Jammer) from 1976 is reminiscent of a kite or a flag often found hanging from American porches. The titles of these fabric works are deliberately vague, allowing the viewer’s imagination to determine the “subject” on its own accord. 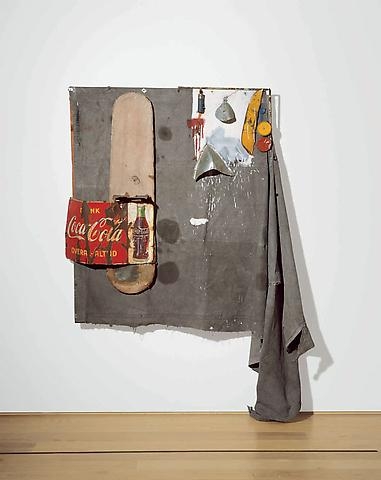 The final area of the exhibition brings the viewer back to the “Combine” works introduced at the show’s entrance, including Dylaby from 1962. The wall installation features a metal Coca Cola advertisement and what appears to be a wooden skateboard. Also featured here is a silk screen titled Rollings (Salvage Series) from 1984 that incorporates images of French, Italian, and Asian origin. A neighboring contrast to these mixed-media works are Rauschenberg’s famous “white paintings” from 1951, anticipating the artists long-standing engagement with minimalism and his impact on diverse branches of modern art.

The show ends with ready made works such as Watchdog from 2007, a row of metal buckets assembled the year before the artist’s death, and a 1985 sculpture constructed of rubber cycling wheels and metal.

In 1984 the artist launched Rauschenberg Overseas Culture Interchange (ROCI) at the United Nations to promote World Peace through cultural understanding. ROCI was a traveling exhibition of all types of art. Prior to this project, Rauschenberg had traveled the world for several years to collaborate with artists from all parts of the world. He was awarded the National Medal of Arts in 1993 and won a Grammy award for his design of the ‘Talking Heads’ album “Speaking in Tongues.” Rauschenberg divided his time working and living in both New York City and Captiva Island, Florida. His work continues to be competitive internationally at auction; just last March, a piece from his “Combine” series was auctioned at Christie’s for over ten million dollars.

This entry was posted on Monday, November 8th, 2010 at 1:29 pm and is filed under Go See. You can follow any responses to this entry through the RSS 2.0 feed. You can leave a response, or trackback from your own site.