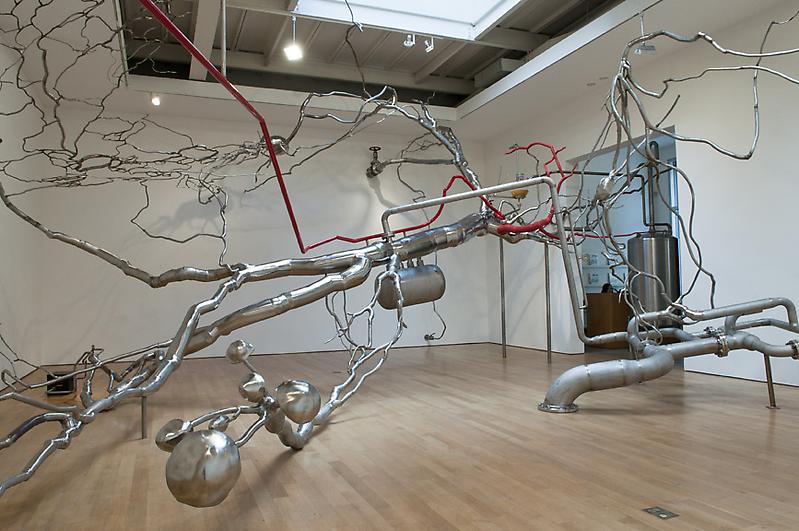 A  large scale installation evoking circulatory systems, arboreal forms, and industrial power-plants has taken over every room in James Cohan Gallery, even the offices. The new work by entitled Distillation, is by New York born artist Roxy Paine, and is part of his Dendroid series. Other works in the series are outdoor sculptures featuring steel tree-like sculptures, including the work Maelstrom, which was exhibited on the roof of the Metropolitan Museum of Art last year. The sculpture begins in the first room, right near the receptionist’s desk, with what looks like an industrial steel tank, complete with valves and pressure gauges. The work extends from this main tank to evoke a variety of conflicting visual cues: internal organs, blood vessels, tree branches, weather vanes, computer mainframes, and of course, the material itself–industrial steel piping. No casting is used to make his works; instead, Paine uses a complex process of soldering and bending the material. Certain areas retain the marks of this process, such as serial numbers, soldering marks, and product names, while other areas are painted red or are highly polished. The sculpture extends throughout the gallery space, extending even into the back offices. 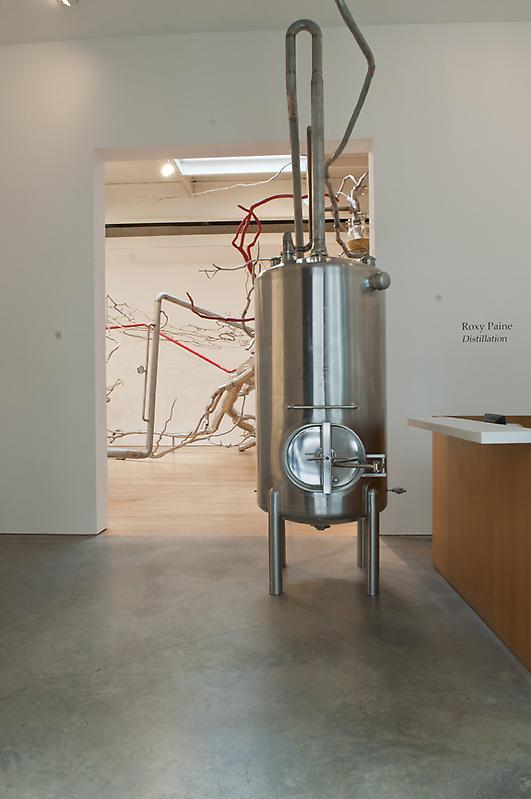 The intersection of the organic and the inorganic has long been a theme for the artist. Issues of controlling nature through mechanical apparatuses play out in his sculptures, as well as in his early works, which consist of machines that are programmed to squirt paint at predetermined times on various surfaces. The early pieces touch upon the natural process of creativity, mediated by the artificial. The earlier works in the series were installed outside, giving a direct, contrasting connection to the forms used within the works to nature itself. Distillation is seen inside the gallery space which helps to push the organic visual links inward, inside the body, as well as retaining references to tree branches. This movement inward as well as outward conflates a microcosmic and macrocosmic outlook, all while retaining the very regular, normal, features of steel piping. 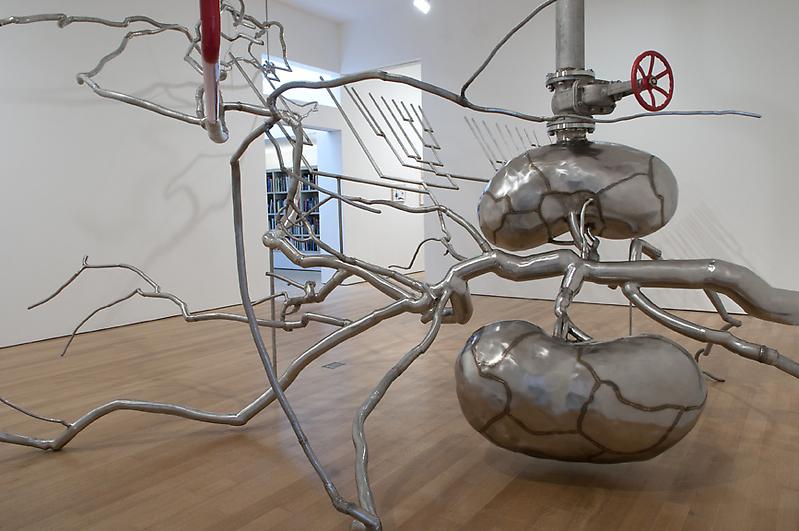 The title evokes both the process of alchemy (to distill metals into gold), as well as processes of making alcohol and other drugs. Indeed, the work includes elements such as a large glass vile filled with dirt, and various tubes, that suggest chemical laboratories. The press release indicates that the work is also a “metaphor for the artist’s mental process,” in the way that ideas go through a similar process of distillation and refinement. In an interview with the artist published in BOMB magazine in 2009, Paine discusses an interest he has in “this drive that humans have to constantly break things down into their component parts and isolate them further and further…I have a desire to constantly break things down in a critical way. I’m trying to examine it, why do we need to constantly break things down into component parts?” It appears as though this interest in components and isolation has manifested itself in Distillation. The installation provokes open metaphoric situations for processes such as oil refinement, forcing nature to bend to technology, the creative process itself, as well as the way that ideas move throughout the world and our bodies. 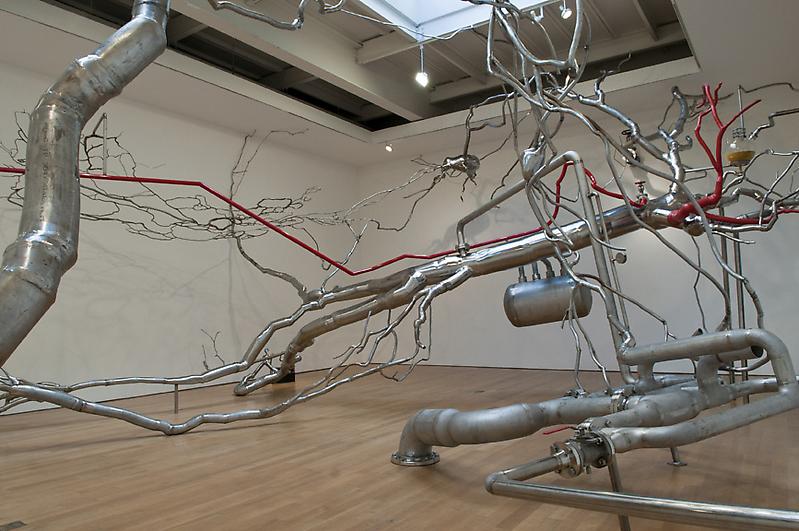 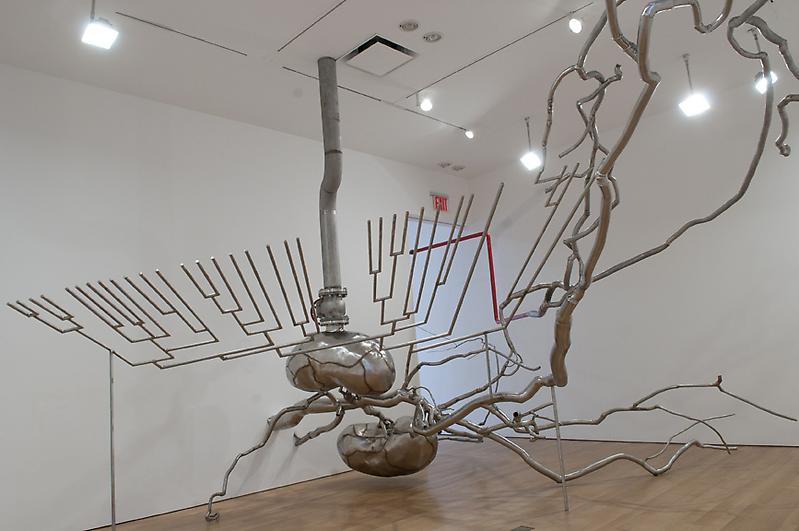 The exhibition also includes Oscillation (2010), which is part of Paine’s Replicant series, in which he meticulously recreates fungi that are either poisonous or have psychedelic properties using polymers, oil, and lacquer. The back room displays preparatory drawings in ink and pencil for Distillation, as well as a scaled model of the work. This room provides insight into the artistic process, and shows sketches of chemical sets, cells, and tree roots. Both of these side rooms add to the main installation because they show Paine’s methodology, as well as another way that the artist combines the organic with the inorganic to express the attempt by humans to control nature. 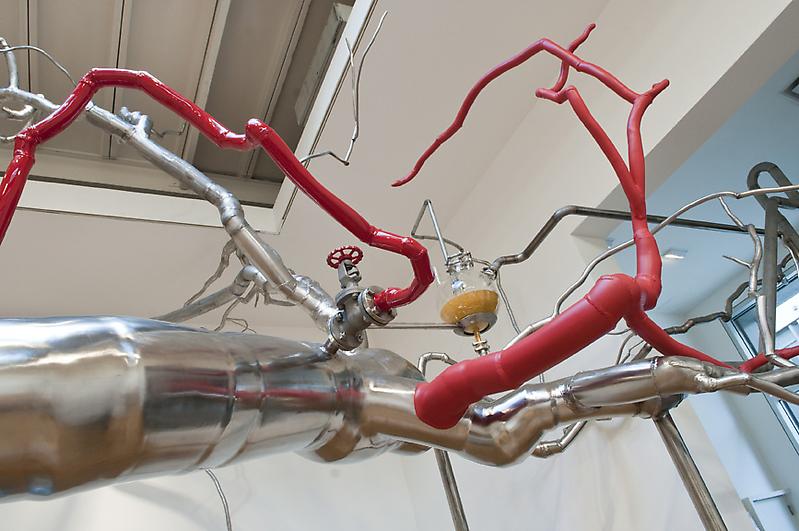 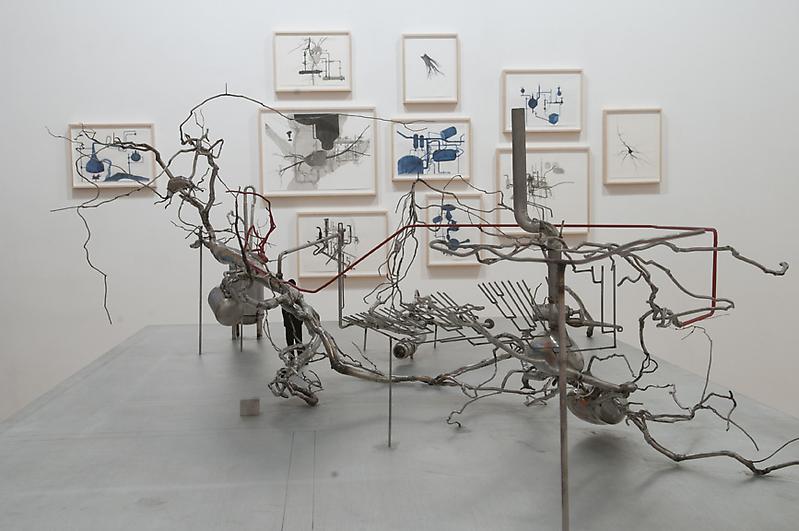 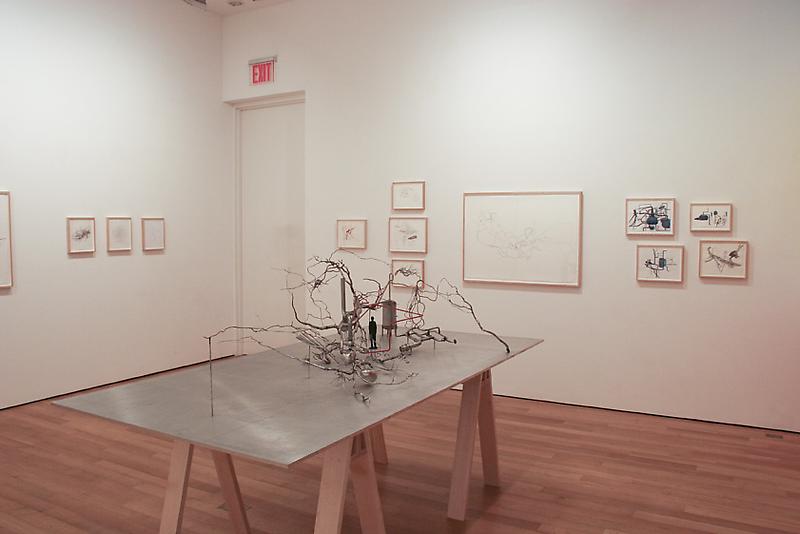 Roxy Paine was born in 1966, and works in Brooklyn as well as in Treadwell, New York. His works have been exhibited at the Metropolitan Museum of Art, in Madison Square Park, and he has participated in the Whitney Biennial. His works are in the collections of the Hirshhorn Museum and Sculpture Garden, Washington, D.C.; Museum of Modern Art, NY; San Francisco Museum of Modern Art, CA, to name a few.

This entry was posted on Monday, November 15th, 2010 at 1:00 am and is filed under Go See. You can follow any responses to this entry through the RSS 2.0 feed. You can leave a response, or trackback from your own site.