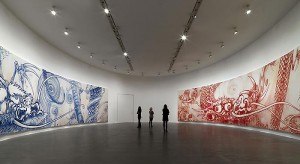 Currently on view at Gagosian Gallery in Rome are two epic paintings by renowned Japanese artist Takashi Murakami. Dragon in Clouds- Red Mutation (2010) and Dragon in Clouds- Indigo Blue (2010) each comprise of nine panels, measure eighteen meters in length and depart from the artist’s usual technicolor palette to revert to more traditional Japanese influences.  Cloud and Dragon paintings are known as Unryūzu and were great influences for the 18th century Japanese artist Soga Shōhaku who has been a source of artistic inspiration for Murakami. 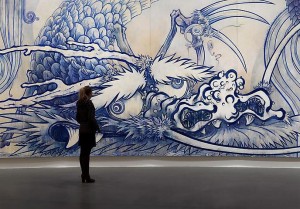 Shōhaku transformed more conventional representations of the dragon found in the traditional Japanese mythological figures of the Cloud and Dragon paintings into fantastical images where the mythological being verged between hideous monster and an abstract anamorphic form. The dragon in Japan is an amalgam of Buddhist iconography which originated in India before arriving in China and Japan and revered as a symbol of fortune and good luck. Murakami similarly recalls Shōhaku’s imaginative technique and imbues his dragon paintings with a wide range of influences from Japanese religious paintings to images from a modern day Japanese video game called “Blue Dragon.”

In Dragon in Clouds- Red Mutation the “red dragon” recalls Thomas Harris’ eponymous novel where the author describes an encounter with the dragon from William Blake’s watercolor painting The Great Red Dragon. Murakami merges the grotesque characteristics of the dragon in Western culture with the generous and gift-bearing powers of the dragon in Eastern traditions. 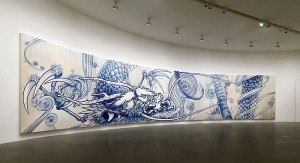 In Dragon in Clouds- Indigo Blue, the dragon is depicted with magnificent swirls of paint which encompass his blue dilated pupils while his nostrils fare upwards. The great scale of these works creates visual turbulence for the viewer while also coaxing their fear of such a monster when they recognize the dragon’s innocent and also charming demeanor. “Combination of red and blue with a creature that has long been thought of as a symbol of one’s destiny is my attempt to reaffirm my devotion to art– the creative process for the paintings resembled a prayer offering,” states the artist. 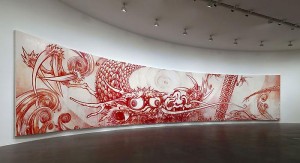 Murakami employs his “Superflat” style in his dragon paintings which is a combination of a highly refined classical Japanese painting technique and a wide range of subject matter from Pop, animé and otaku. The artist’s unique way of merging historical Japanese influences with present day culture create powerful depictions which comment on a range of contemporary issues and ideas. 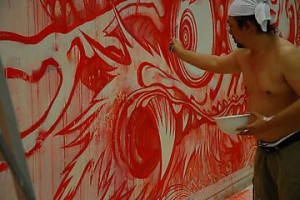 Takashi Murakami in his studio, via Gagosian Gallery

This entry was posted on Friday, December 24th, 2010 at 5:04 pm and is filed under Go See. You can follow any responses to this entry through the RSS 2.0 feed. You can leave a response, or trackback from your own site.