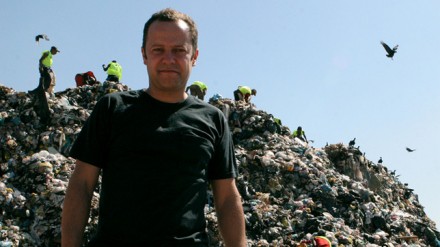 Documentary films by Vik Muniz and Banksy have both been nominated for an Academy Award in the same category of Best Documentary Feature. Muniz’s stirring Waste Land and Banksy’s clever Exit through the Gift Shop will face off at the Oscars in Hollywood on February 27, with hosts Anne Hathaway and James Franco. The question of Banksy’s presence is especially hyped as the artist’s true identity is entirely secretive—as dictated by his edgy work and persona, he appears only in silhouette throughout his own film. 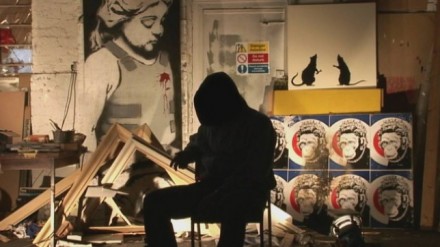 Still, Exit through the Gift Shop, via Oscar

More text, images, and film trailers after the jump…

In Waste Land, Muniz captures on film and photograph the lives of garbage pickers in his native Brazil at Jardim Gramacho, the largest landfill in the world. Known for using trash in his own work, the artist portrays the real-life struggles of people surviving off of others’ waste. With initial intentions of ‘painting’ them in trash, the story takes a different spin as Muniz and director Lucy Walker uncover the humanity of the recycling catadores, helping to produce the artwork themselves and receiving the proceeds after ultimately selling Muniz’s final photographs.

Trailer, Exit through the Gift Shop

Banksy, the unidentified British street artist and political activist, has been nominated for Exit through the Gift Shop. A twisting documentary of a documentary, Thierry Guetta follows the early days of guerrilla street art, featuring artists such as Space Invaders and Shepard Fairey. After finally editing years of footage, the enthusiastic Frenchman’s ADD shown through; so Banksy kept Guetta occupied creating his own art show, in the meantime re-editing the film into its current form. 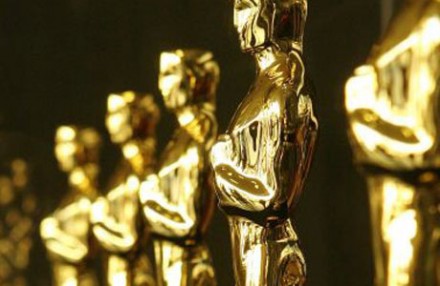 Entertainment Close-up November 7, 2010 Groupon, a shopping website that offers a daily deal on the best local goods, services and cultural events, launched in Halifax on October 27.

“As the capital of Nova Scotia, Halifax is home to plenty of high-quality local merchants, making it a great match for the Groupon model,” said Rob Solomon, president and chief operating officer of Groupon. “We look forward to bringing residents unbeatable deals from the best Halifax businesses, while creating new revenue streams for top local merchants.” “Groupon brings buyers and sellers together in a fun and collaborative way,” said Solomon. “We offer the consumer a great deal they can’t get anywhere else and deliver the sales directly to the merchant.” During its first week in Halifax, Groupon noted its featured deals included a hair salon and local brewery. Upcoming deals include an espresso bar, yoga classes and teeth whitening. Groupon Halifax joins more than a dozen existing Canadian markets currently enjoying Groupon deals. in our site groupon portland

www.groupon.com ((Comments on this story may be sent to newsdesk@closeupmedia.com))

This entry was posted on Thursday, January 27th, 2011 at 11:49 am and is filed under Art News. You can follow any responses to this entry through the RSS 2.0 feed. You can leave a response, or trackback from your own site.