Egyptian special forces on Monday secured the main floor inside the Egyptian Museum in Cairo. Via NY Times

The National Egyptian Museum is currently guarded by tanks, having been looted Friday night. Dr. Zahi Hawass, Head of the Supreme Council of Antiquities—and a member of the current administration—claims over 1,000 protesters stole from the gift shop, with ten making it into the galleries and smashing glass vitrines and antique statues, including one of King Tutankhamen, as well as beheading two mummies. Wafaa El-Saddik, former director of the Egyptian Museum (until just a month ago), believes the museum’s own guards did the looting, who are hugely underpaid despite El-Saddik’s previous efforts.

Next door, buildings of the National Democratic Party and the Press Club were in flames over the weekend; efforts lacked to save the structures, though the museum was kept safe. In Tahrir Square—Arabic for Liberation—protesters scorn current leader Hosni Mubarak with chants and clever graffiti and signs, speaking English in an appeal to the West. 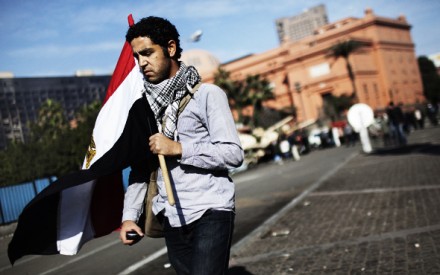 Protestor, with National Egyptian Museum in the background, via Economist 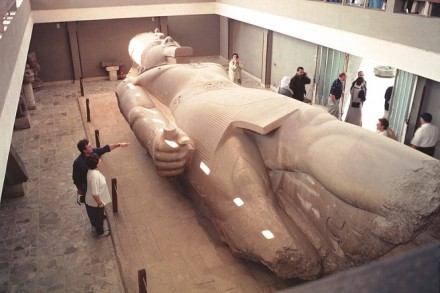 Egypt is not known for its museum security, the Mahmoud Khalil Museum having lost a valued $50 million Van Gogh recently while only seven of 43 security cameras were actually functioning. Hawass, despite suspicions of trouble, did not visit his museum until Saturday morning—due to a state imposed curfew—only to find a chain of protestors (whom he accuses of the misdeeds) protecting the building from further thievery. Other than the looting and vandalism at the National Egyptian Museum, the Port Said Museum in Sinai was also looted, while the Royal Jewelry Museum managed to secure its goods in the basement prior to any attacks. Similarly, the Coptic Museum, the National Museum of Alexandria, and El Manial Museum foiled looters, though the Memphis Museum was not so lucky, losing much of its contents, according to El-Saddik. 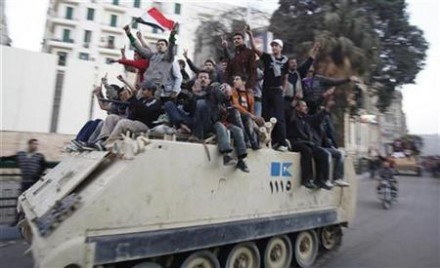 Protestors atop a military vehicle, via Reuters 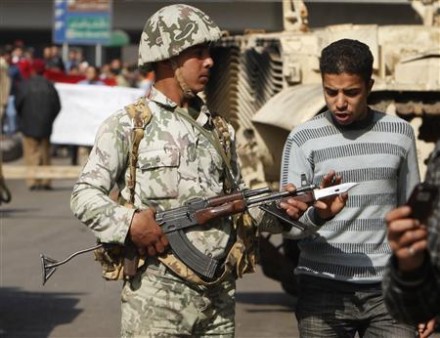 Protestor touches a soldiers knife in downtown Cairo, via Reuters

Government Offers Talks With Protestors After Army Says It Will Not Fire [New York Times]
Egypt Opens Opposition Talks on Eve of Million-person March [Bloomberg]
The Battle of Cairo Is Over, Or Is It? [Economist]
Mubarak holds talks, pushed by army, U.S., and protests [Reuters]
Mummies are Beheaded and Museums Ransacked Amid Egypt’s Revolutionary Chaos [ArtInfo]
Art and Revolution During the Egyptian Protests [Hyperallergic]

This entry was posted on Monday, January 31st, 2011 at 11:37 pm and is filed under Art News. You can follow any responses to this entry through the RSS 2.0 feed. You can leave a response, or trackback from your own site.