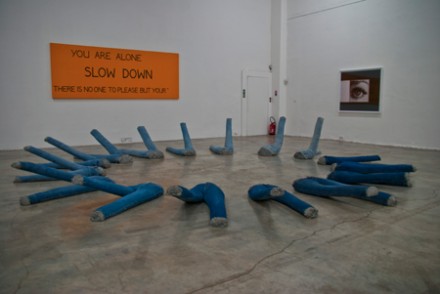 Installation image, all photos by Caroline Claisse for Art Observed unless otherwise noted

Currently on view at the Palais de Toyko is Fresh Hell, a group exhibition curated by British-born New York-based artist Adam McEwen.  Shedding a bit of dark humor on the city of Paris, McEwen brings together medieval sculpture and conceptual work from artists long forgotten as well as contemporary artists, pondering just what sort of position and creative endeavors an artist can make in today’s world. The works deal with morbidity, decay, and notions of ‘the end,’ making Death the principle theme. 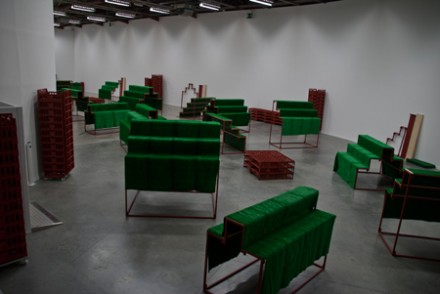 McEwan’s exhibition presents the viewer with artistic “Hell” from the past and the present. Michael Landy’s The Market, which was first seen during the young British art boom in the 1990s, is now re-erected; once busy and full of life, now bare with neither potential clients nor enthusiastic sellers. Films of Domenico de Dominicis reveal the artist repeatedly failing to bring himself to an early death. McEwan includes works by the late Martin Kippenberger, an excessive alcoholic. Cuban performance artist Ana Mendieta lies on top of a skeleton; the wife of sculptor Carl Andre, she died under mysterious circumstances, falling from the window of her apartment. 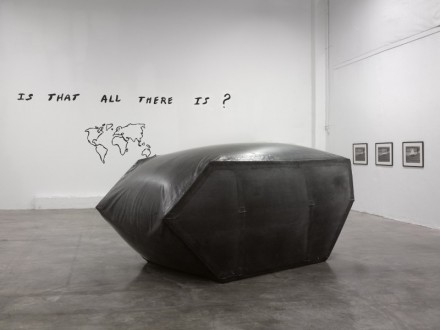 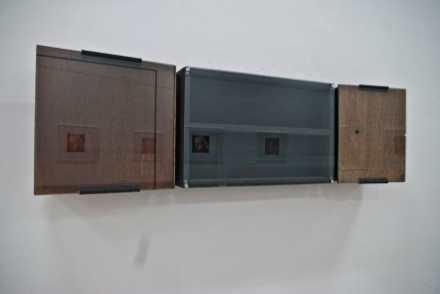 Above a small rushed drawing of the earth’s continents by Jessica Diamond, the artist has written in big black words, “Is That All There Is?” Reinhard Mucha’s dark cabinets are displayed in another room while David Hammon’s ripped hood from a sweatshirt hangs high on the wall as if to pay reverence to the previous wearer; both works signal a seemingly previous tendency towards high-esteem and wealth but are now empty and sad. 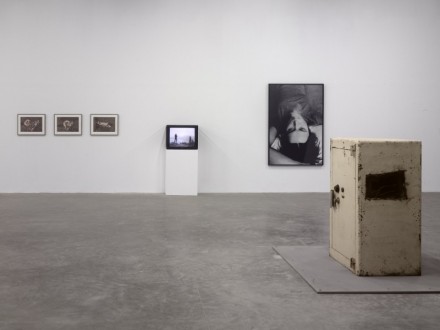 In another room, a photograph of Sarah Lucas smoking is displayed close by one of Henri Michaux’s 1960s mescalin drawings and Dan Grahman’s chart of drugs and their side-effects, as if to comment on art’s after-effects. All of a sudden one stumbles upon an anonymous 15th-century sculpture of Saint Florian with carved water flowing out of his wooden bucket; an incredibly lively an uplifting site amidst the other more solemn artworks as if to say, “there is hope.” 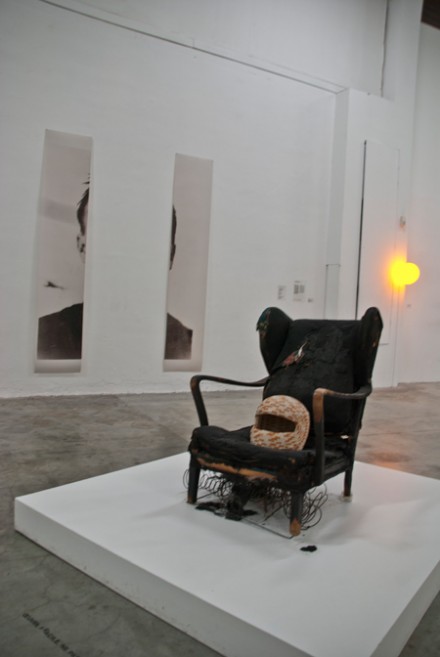 McEwan creates a labyrinth of art works which freshly tells the tale of the dark side of life and of art. The curator’s use of art-historical and contemporary references takes the viewer on a ride through the production of art and its many melancholic—yet beautiful—lows. 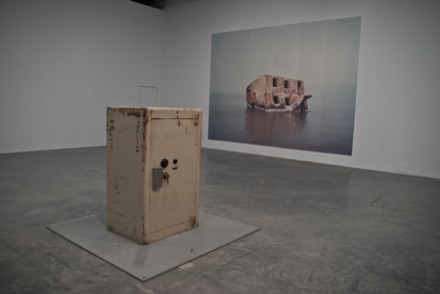 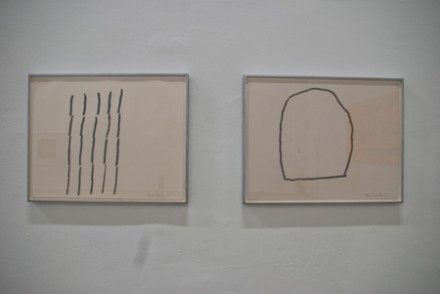 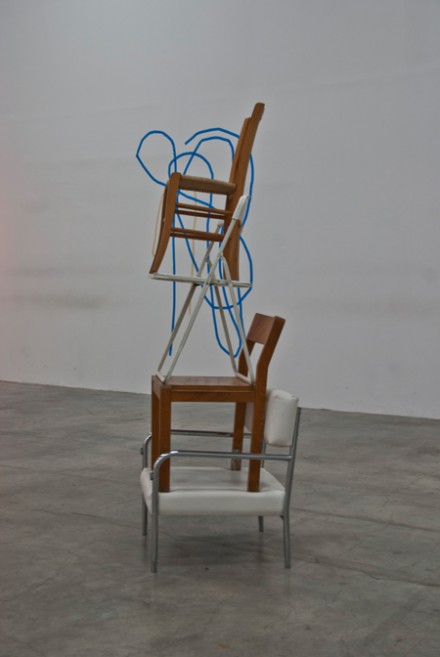 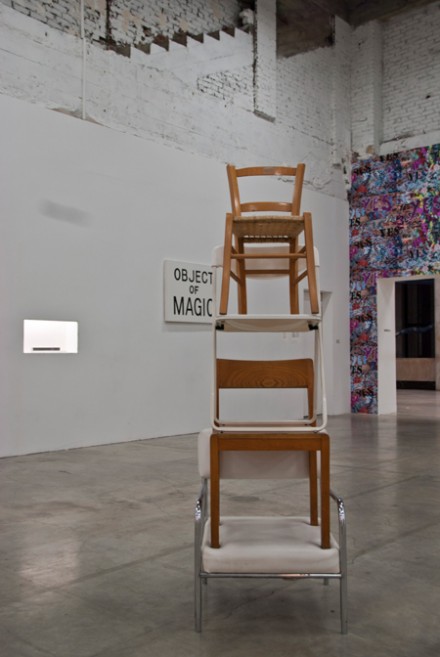 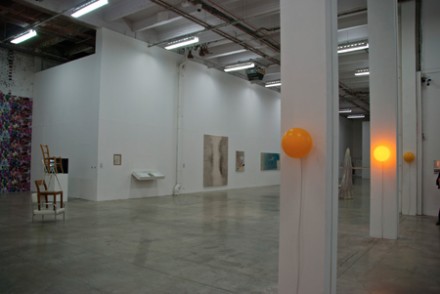 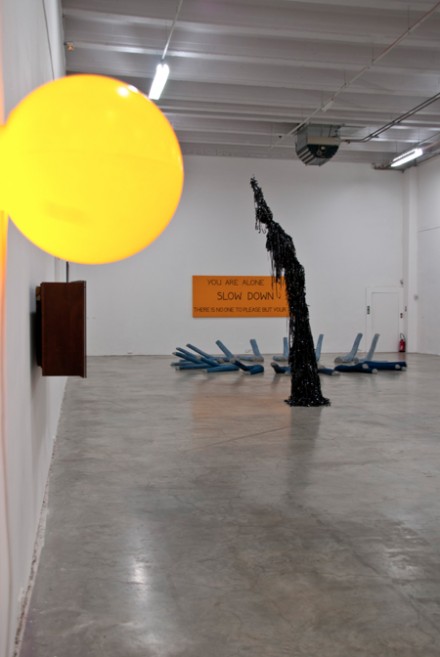 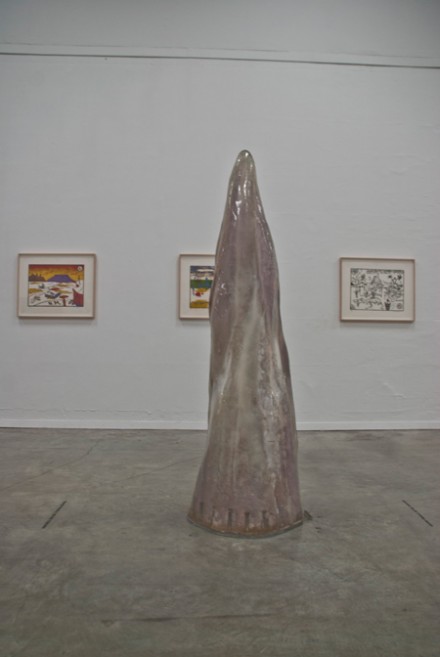 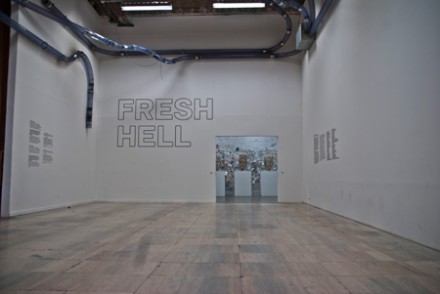 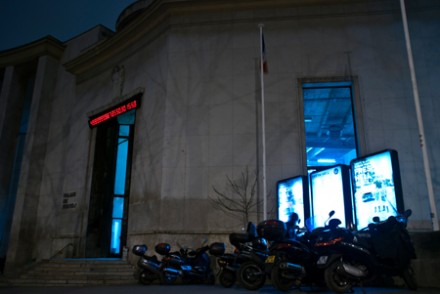 This entry was posted on Thursday, January 13th, 2011 at 12:30 pm and is filed under AO On Site, Go See. You can follow any responses to this entry through the RSS 2.0 feed. You can leave a response, or trackback from your own site.