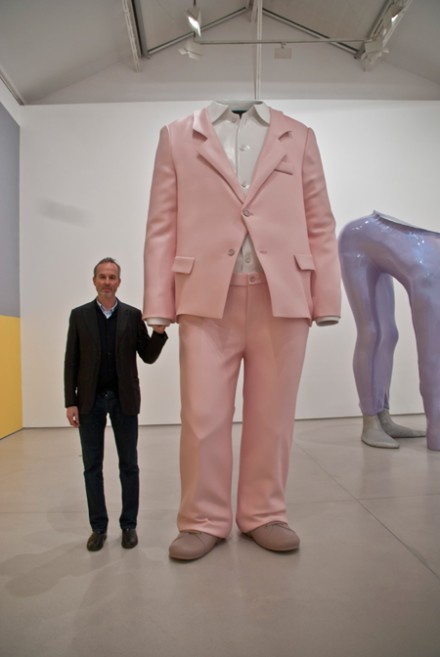 Erwin Wurm, with his Big Suit (2010) – all photos by C. Claisse for Art Observed

Currently on view at Thaddeus Ropac Gallery in Paris are two shows: Drawings from 2000–2010 by Tom Sachs and Yes Biological by Erwin Wurm. Tom Sach’s fifth solo show at the gallery, this time he presents a symbolic group of works spanning the last decade of his oeuvre, referring to central themes in American culture and society. Elsewhere in the gallery, visitors can stumble upon Erwin Wurm’s massive sculptures. The Austrian artist’s works often rely upon viewer participation, occasionally even prompting spectators to add their own pose. 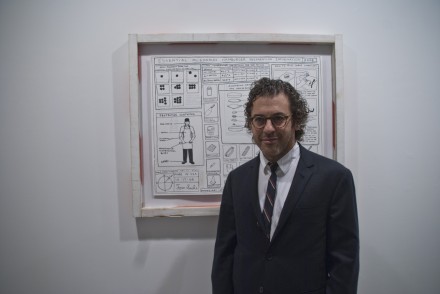 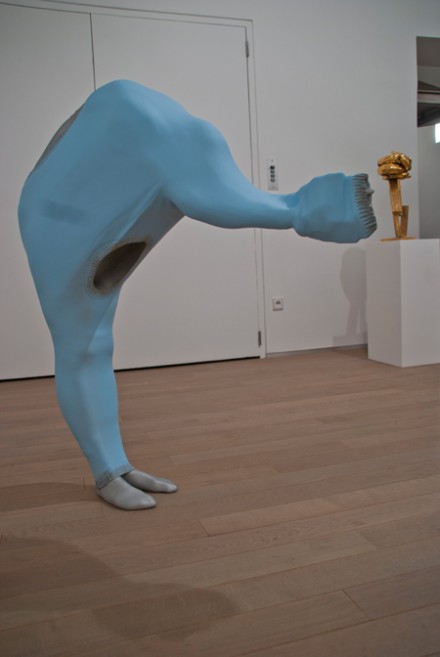 Wurm has consistently tried to take his work beyond the traditional realm of sculpture. The artist applies his own premise to everyday reality, “To change mass and volume is a sculptural act. To gain or lose weight is also a sculptural act.” Thus according to Wurm, people can become sculptures themselves—an idea exemplified by his performance work 59 positions in which participants took up unusual positions with everyday objects, freezing as “One-Minute Sculptures.” The video of these performance-based sculptures is now at the Museum Ludwig in Cologne and the Centre Pompidou in Paris. 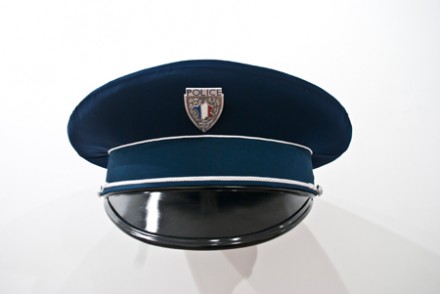 Wurm’s sculptures are often defined by their shell or the outer dress which accentuates their volume. This could be in the form of a suit or a pullover. The works in the exhibition have the extraordinary ability to only become a complete sculptural form once the visitor interacts with it in some way. For example, the over-sized police cap is completed only when the viewer stands underneath it; the head of the viewer disappears, rendering the person anonymous, the hat directly upon an unidentified, unique torso. 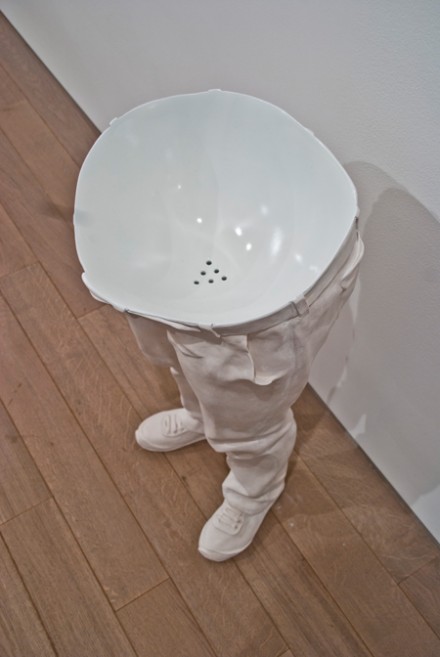 Yes Biological exhibits Wurm’s exploration of the concepts of painting and sculpture. The artist’s intent is to make the exhibition space transform into a living work of art. 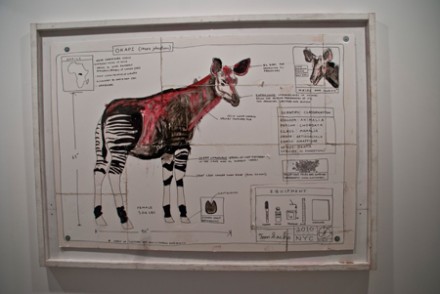 Other rooms of the gallery hold Tom Sach’s drawings. It is the first time an exhibition has been dedicated entirely to his works on paper. Many of the works shown are merely sketches of an idea or sculpture. Others are diagrams, floor plans, lists: conceptualizations of later projects such as Nutsy’s McDonald’s (2001) or the Waffle Bike (2008). 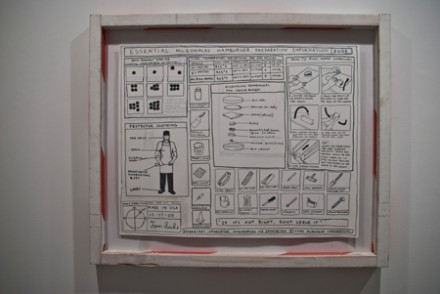 The drawings bear remnants of his thought process through covered up and concealed mistakes. Their seeming disorder actually signifies Sachs’s categorization. Such fragmentation is used also in his approach to the portrayal of certain ideas as in the McDonald’s drawings, whereby he shows how a successful business model can bear the fruits of violence and injustice. 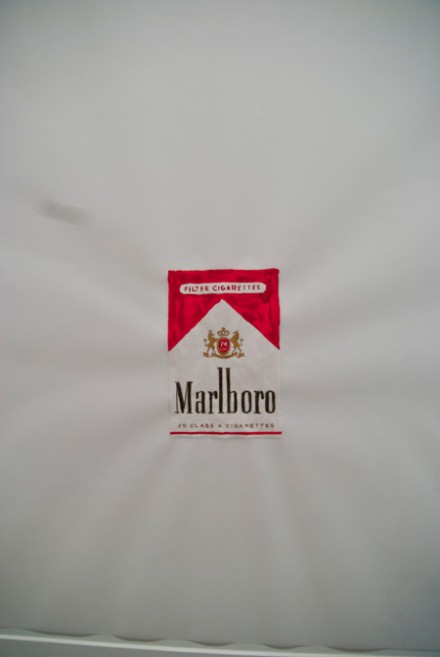 Also displayed are a group of works he calls “fancy drawings” made with ink, watercolor, or pencil, on vellum. These works concentrate on one object such as a condom, a pack of cigarettes, or an NYC parking ticket. Sachs gives such everyday objects an added aura by drawing attention to them individually on the framed vellum. 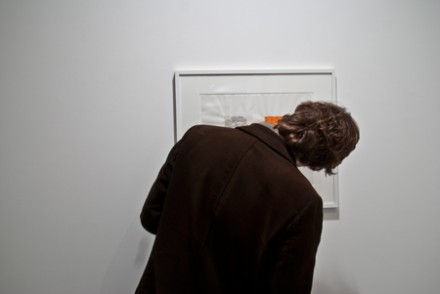 Tom Sachs and  Erwin Wurm are two exhibitions which will delight and intrigue the viewer by the mere banality of the subject matter, giving the everyday an unusual and new found glamor. 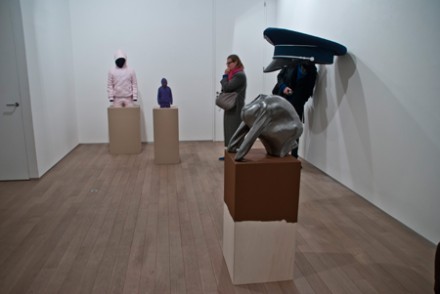 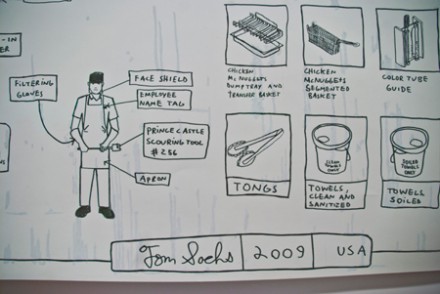 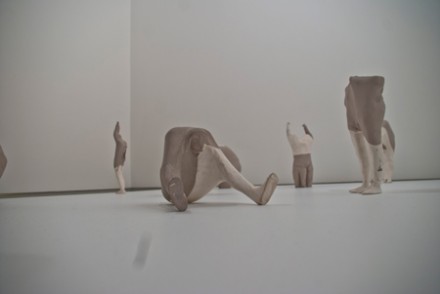 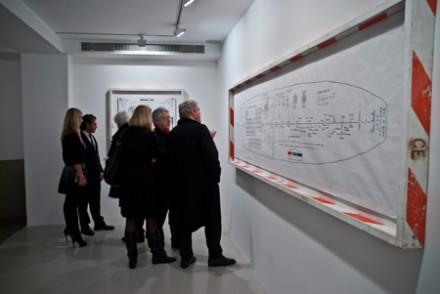 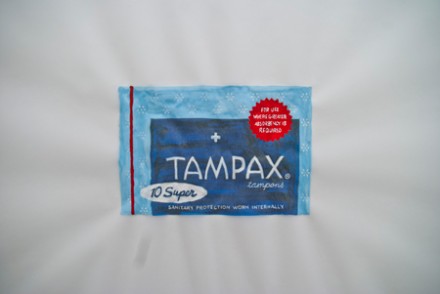 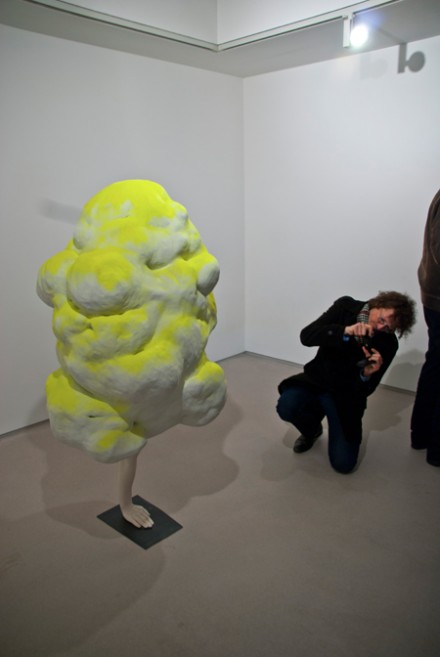 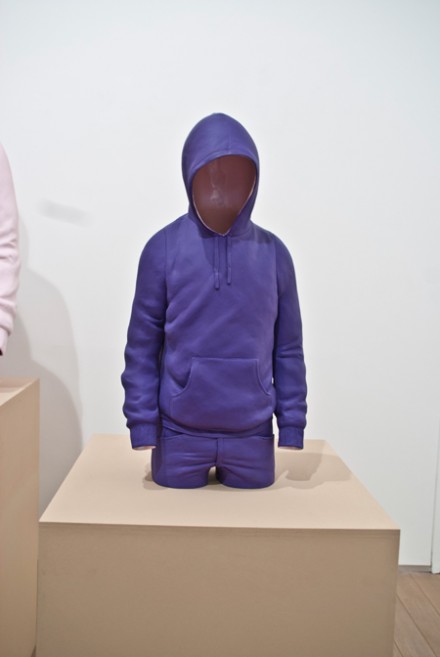 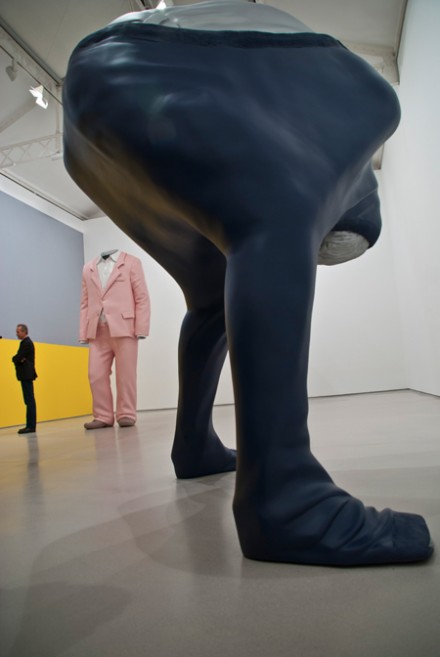 This entry was posted on Tuesday, January 18th, 2011 at 12:30 am and is filed under AO On Site, Go See. You can follow any responses to this entry through the RSS 2.0 feed. You can leave a response, or trackback from your own site.