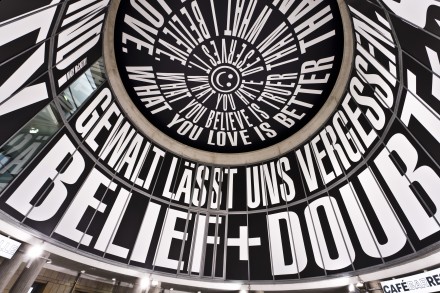 Barbara Kruger’s Circus installation covers the rotunda of the Schirn Kunsthalle in Frankfurt through January 30. With her unmistakable aesthetic and poignant use of language, Kruger interferes with the traditional manner in which information is transmitted through the museum institution.  Her commitment to dismantling clichés and pervasive stereotypes through the use of monumental text makes her work both politically relevant and visually arresting. 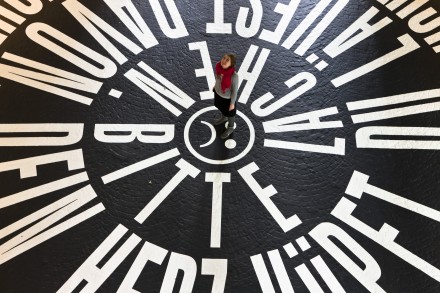 Kruger often chooses to exhibit her work publicly as a means of diffusing her political ideology, thematizing gender relations, consumer culture, and control.  Curator Ingrid Pfeiffer asserts that her monumental text lends a graphic quality to the characters, effectively creating image from language. The installation text is presented in both English and German, with phrases such as: “BELIEF + DOUBT = SANITY,” and, “DU BIST VERLIEBT. DU KANNST EINFACH NICHT AUFHÖREN ZU LÄCHELN. DEIN HERZ HÜPFT. DU LÄUFST DAVON. (YOU ARE IN LOVE. YOU SIMPLY CANNOT STOP SMILING. YOUR HEART LEAPS FOR JOY. YOU RUN AWAY.)” 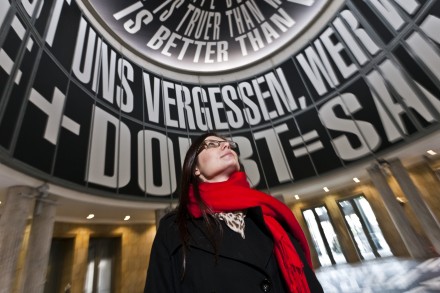 Circus takes on a temporal-spatial quality as the viewer navigates the rotunda: it is impossible to take in the entirety of the artist’s message at once, and this delay makes the participant aware of her physicality within the space.  In this way, the artist successfully negotiates the same manipulative aspects of advertising to diffuse her politics, overwhelming the viewer with a barrage of information of which only a portion is actively absorbed. Her interest in architecture extends beyond the formal to her interrogations of social architecture: the way populations are stratified and the manner in which men and women relate to one another. 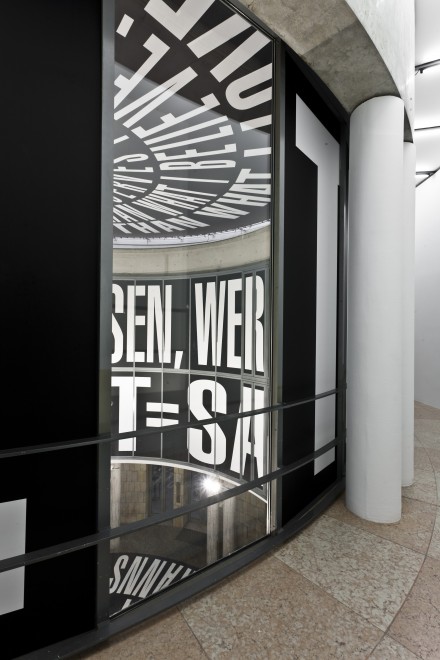 In 2002, the Schirn exhibited Shopping. A Century of Art and Consumer Culture. As part of the exhibition, Kruger used the shopping district Galeria Kaufhof on the Zeil in Frankfurt as a site for a 2,200 square-meter work.  She covered the façade of the Galeria with two gigantic eyes above which read: “DU WILLST ES, DU KAUFST ES, DU VERGISST ES (YOU WANT IT, YOU BUY IT, YOU FORGET IT).”  Referencing the theme of consumerism from her earlier work, Kruger shone a light on the materialism inherent to her chosen site. 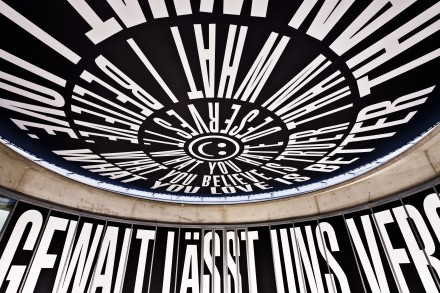 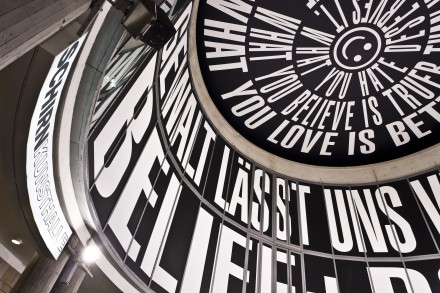 This entry was posted on Wednesday, January 12th, 2011 at 2:02 pm and is filed under Go See. You can follow any responses to this entry through the RSS 2.0 feed. You can leave a response, or trackback from your own site.