“I’m best known for my film about Zidane, which showed a super-visible body. After making that it seemed a good idea to make films about someone who doesn’t exist, at least not on paper.” In the Guardian, Philippe Parreno is referring to his most recent video, Invisibleboy currently on view at the Serpentine Gallery. The film depicts the imaginary reality of a young illegal alien in New York’s Chinatown, with the creatures that inhabit the boy’s mind scratched onto the film stock.  Along with three other short video pieces, Invisibleboy is part of Parreno’s highly choreographed exhibition at the Serpentine, which, despite their highly disparate content, are conjoined by Parreno’s use of the exhibition space as an experiential medium. From a Thai compound to Robert Kennedy’s funeral ride, Parreno’s work is highly specific and seemingly unrelated, yet his consideration of time and sequence with regard to the viewer’s experience are the central themes in his body of work. The concept of viewer perception also exists within the narrative of much of his work.

Viewers at the Serpentine Gallery can only watch Parreno’s four films individually—they are not running simultaneously nor are they on direct loops, as most patrons of art institutions have come to expect of video art scheduling.  Instead, Parreno has conceived of the exhibition as a singular art entity, each of the films not isolated works with separate meaning but as “events” the viewer passes through in a timed route through the Serpentine. As the film ends in one room, the automatic blinds rise and the lights go on, just as the opposite occurs in the next gallery. There are 160 loud speakers coordinated throughout the Serpentine, “designed to seduce, delay (and) speed up” viewers.  Parreno compares his use of the exhibition itself to that of a film or musical composition, an apt metaphor which describes the larger structure of artistic invention as one which is also manipulated. It’s easy to imagine Parreno’s synchronized blinds as a section of a larger orchestra. 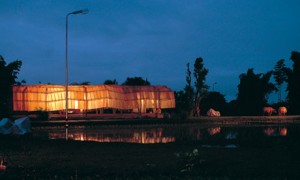 Philippe Parreno, The Boy From Mars, 2003. Via The Guardian

Labeled a “relational” artist, as much for his interactive art and consideration for the viewer as for his collaboration with relational artists like Liam Gillick, Parreno literally corrals gallery-goers like cattle through this exhibition. He decides exactly how long viewers spend in the Serpentine, which oddly The Independent quotes as thirty minutes and the Telegraph quotes as forty-five. Like Gillick and other relational artists of his generation, Parreno (despite the seemingly democratic sounding “relational”) doesn’t give his viewers any choice whatsoever in how to view his work. He is seemingly interested in control of the viewers bodies and gaze, a theme which appears in the content of the four films as well.

Zidane: A 21st Century Portrait, Parreno’s work with Douglas Gordon which films the French soccer player Zidane throughout a game, deals with multiple vantage points. The film is about publicity and media saturation, but is also concerned with the meeting of several viewpoints: the soccer fans at the game, the media, and the artists. The media through which Zidane is being watched—live, on the news, or in the gallery is also part of the work. Invisibleboy (2010) deals with the subject position of the illegal boy and his perception of reality. Also on view is June 8, 1968 (2009) a film about the train journey Robert F Kennedy’s coffin made on that date and simultaneously about Paul Fusco‘s photo essay of the event titled “Funeral Train.” June 8, 1968 is concerned with the viewers in Fusco’s original photographs as well as the dead, unable to gaze back: “It was the point of view of the dead. People are looking at you. And you are dead and invisible to their gaze,” Parreno explains to The Guardian as the inspiration for the video. June 8, 1968 is fascinating also as a deconstruction of photojournalism. Parreno takes apart its imagery and exposes the medium’s fictions, and of course, its dueling internal perspectives.

This entry was posted on Monday, January 3rd, 2011 at 3:52 am and is filed under Go See. You can follow any responses to this entry through the RSS 2.0 feed. You can leave a response, or trackback from your own site.